Anatomy of a train wreck: Why the Amtrak disaster should come as no surprise

The tragedy of the derailment in Philadelphia is that it was entirely preventable. Our politicians owe us answers 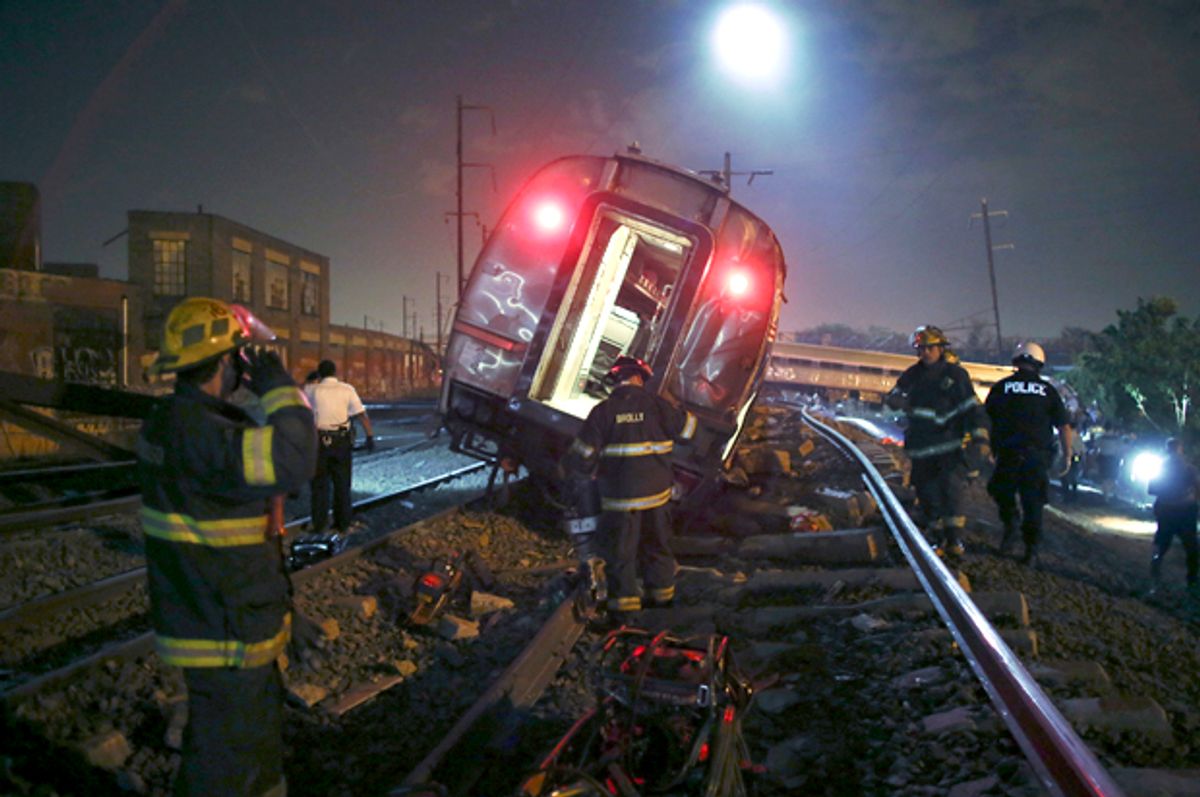 Emergency personnel work the scene of a deadly train wreck, Tuesday, May 12, 2015, in Philadelphia. (AP/Joseph Kaczmarek)
--

In the public eye, the disaster on the rails last week in Philadelphia was not only tragic but also shocking. As a crowded Amtrak train approached a bend in the track, it was barreling along at more than 100 miles an hour -- twice the mandated speed for that section. The resulting derailment killed eight people, highlighting grave deficiencies in Amtrak's safety system.

But while Amtrak officials may have been devastated, they could not have been surprised: The accident confirmed clear vulnerabilities in the safety system, shortcomings that the rail company's internal watchdog had been warning about for more than two years.

In a December 2012 report, Amtrak's inspector general wrote that "formidable" and "significant challenges" were delaying deployment of a safety system known as Positive Train Control, which identifies cars that are traveling at excessive speeds and automatically slows their progress. Four years earlier, Congress had required that Amtrak and other American rail companies add the technology to their operations, but only a fraction of the rail systems were by then covered. Had the PTC technology been in place in Philadelphia, federal regulators say, the derailment might well have been prevented.

The inspector general's 2012 report zeroed in on one missing element that was crucial to the broader deployment of the safety system: Amtrak had for years failed to acquire adequate rights to broadcast communications signals through the public airwaves. Without these so-called spectrum rights, Amtrak's trains could not communicate with the electronic brains of the safety system, preventing its use along key stretches of track. This lack of spectrum had become the "most serious challenge" in the railroad's efforts to deploy the safety equipment more broadly, Amtrak's watchdog warned.

The failure to more quickly address this challenge seems like a story that the political world can oversimplify into a standard tale of cut-and-dry blame, featuring singular villains. But in this saga, many factors appear to have contributed to the disaster.

For one, there was a lack of adequate resources. Flush with profits, private freight companies had the cash to buy the spectrum they needed for their own PTC system. By contrast, Congress did not provide Amtrak with the same resources.

There was also a lack of political will. When public transportation officials begged Congress to pass a bill ordering the FCC to give the railroad unused spectrum for free rather than selling it to private telecommunications firms, lawmakers refused.

But some technology experts argue that Amtrak itself was also to blame for doggedly sticking to an outdated plan. They say that because communications technology has advanced so quickly, the railroad officials did not need to build a PTC system on exclusive spectrum -- whose scarcity makes it difficult and expensive to obtain. Instead, they assert, new technologies would have allowed Amtrak to more quickly construct a system using shared spectrum, existing telecommunications infrastructure or even unlicensed frequencies that are used for things like in-home Wi-Fi.

"We have boatloads of fiber running alongside train tracks in the rights of way," said Harold Feld, a senior vice president of the think tank Public Knowledge. "If I were architecting this system, I could deploy it tomorrow using unlicensed spectrum." Amtrak's "obsession with exclusive licensing kills," he concluded.

How much each of these factors contributed to the catastrophe can certainly be debated. What is not debatable, however, is the existence of warning signs. The 2012 inspector general report proves they were there for all to see.

That, then, raises two pressing questions: Why were those warning signs not more urgently addressed? And will such warning signs be acted on in the future? America deserves answers.