Hollywood has turned its back on America. Karen Allen turned her back on Hollywood. In a new film, all's forgiven 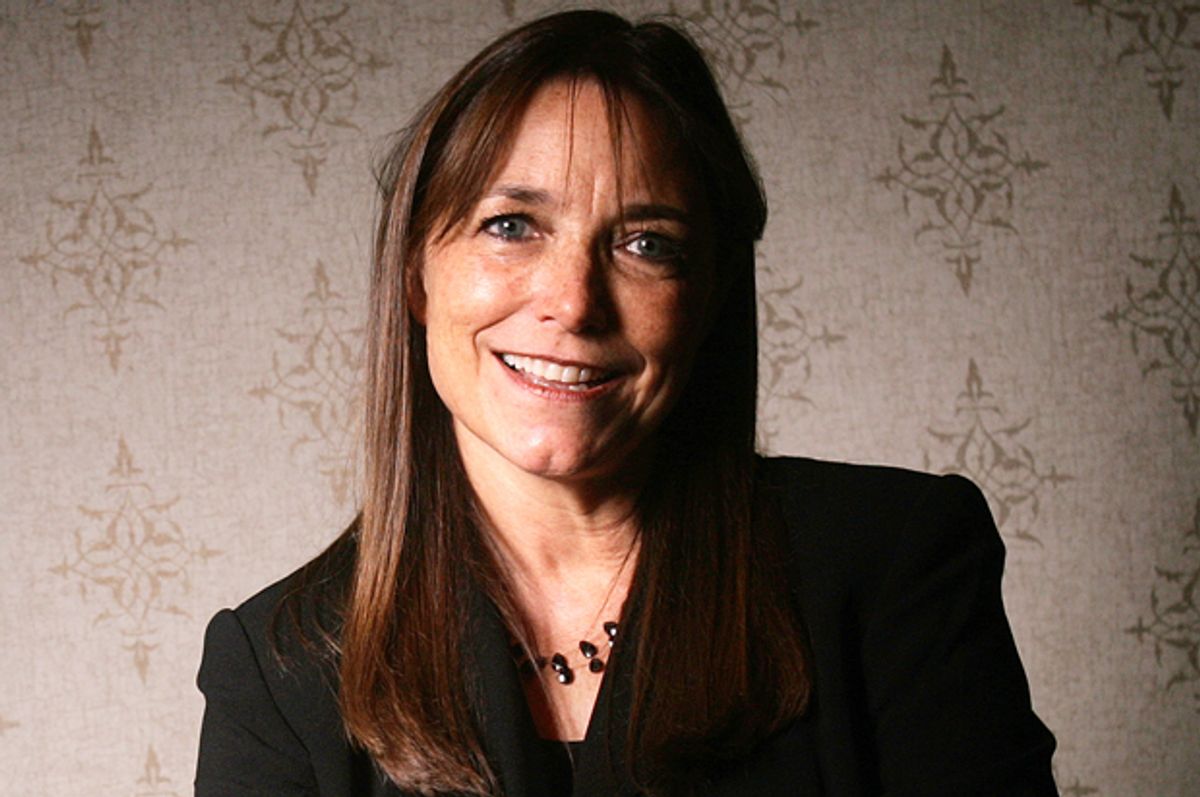 Seen any good movies lately? I bet not -- or not in a theater, anyway. The 50 percent of us who don’t go to the movies much anymore haven’t seen any, good or bad. Even if you’ve been to one, you may not recall what you saw beyond the blur of fast and furious guardians of this or some other galaxy. And who’s to say what’s good? H.L. Mencken said nobody ever went broke underestimating the intelligence of the American public, but long before him a far wiser man said there’s no disputing taste. If you go to the movies and leave feeling entertained, I say good for you.

This is a big movie weekend. The biggest release is a fantasy about a futuristic utopia you can enter by rubbing a magic pin. A big hit last weekend was a fantasy about a post-apocalyptic dystopia you can exit only by dying. Until 1970, 80 percent of top-grossing films were dramas or comedies about real people who might be in improbable circumstances but were nonetheless human. Since 1980, 80 percent of top-grossing films have been fantasies starring mythological creatures, extraterrestrials or superheroes. Hooray for Hollywood. It’s the information age and we’re all living in the Matrix.

I have seen a good movie lately that felt very real. Adapted by director Mark Kemble from a play he wrote, "Bad Hurt" is about a white, blue-collar Staten Island family barely getting by at the close of the last century. Ed and Elaine Kendall still live with their three grown children in a row-house Ed’s parents bought long ago. Daughter Deedee is intellectually disabled. Son Kent, an ex-high school baseball star, suffers post-traumatic stress from service in the first Gulf War. Younger son Todd drives a bus but dreams of one day becoming a cop.

Ed, a Vietnam vet, sleeps in a tool shed out back and drinks. Elaine fights to keep her family afloat, but it’s a losing battle. Kent’s addicted to painkillers. When his prescription runs out he hits the streets to trade his Silver Star for some Demerol. Deedee has a boyfriend, a sweet, intellectually disabled African-American named Willy.  Both attend a "sheltered workplace" where their romantic urges land them in hot water. Deedee, being the girl, gets the blame and eventually the boot.

Karen Allen plays Elaine, the emotional center of both the family and the film. If you’re a guy who came of age in the ’80s there’s a good chance Allen was your first movie crush. Her big debut was in "Animal House," the classic that brought back the toga party and set film comedy on the long road to Seth Rogen. Next came two more iconic films, "The Wanderer" and, of course, "Raiders of the Lost Ark," followed by romantic leads opposite Jeff Bridges in "Starman" and Bill Murray in "Scrooged." Part of her enormous appeal to guys was that she is a great natural beauty they could somehow imagine putting up with them.

Allen’s Elaine Kendall doesn’t just put up with men; she props them up, every day, in part because she has to. "Bad Hurt" reminds me very much of "A Brief Vacation," Vittorio De Sica’s lovely last film in which a woman bound to a selfish, loafing spouse, preyed on by in-laws and children, contracts TB. Since Italy has universal health care she can go to a sanitarium in the Alps where, for the very first time, someone serves her a meal, asks her how she feels, tells her she is beautiful.

Just before Christmas in 1999, Elaine’s family and world fall apart. But unlike the mother in De Sica’s film she’s living 20 years into the Age of Reagan and has no place to turn. Kent says he was poisoned in Kuwait but the VA turns a deaf ear. As he writhes in withdrawal Elaine begs their family doctor for meds, but he hangs up on her. She can’t afford medicine for Deedee, whom Ed is ready to warehouse.

Elaine seems so utterly alone. The Kendalls are Irish Catholics whose faith still echoes in their lives, but there’s no sign of their church. When Todd, the child most like her, asks, “What will you do?” she softly replies, “I wish you’d said ‘we’.” When tragedy finally strikes, she enters their dark home, turns up a radio playing a gratingly mindless holiday jingle, shuts herself into a small closet, and screams.

The Kendalls aren’t selfish, just broken. They live in what John Updike called “the twilight of the old moral order,” a light far too faint to see by. They console each other with stories that are lies that only compound their isolation. Elaine’s great gift, apart from her sheer strength, is to see and love them as they truly are. The film’s perfect coda is set at a holiday party where we see them all dancing, Ed and Elaine cheek to cheek.

If you only know Allen from "Raiders" or "Scrooged," her acting here will be a revelation. I was less surprised, having long ago seen her heartbreaking Laura Wingfield in Paul Newman’s film adaptation of "The Glass Menagerie." The whole ensemble is superb, a tribute no doubt to the director as well as the actors. In depicting family life with the clinically depressed and mentally disabled, Kemble goes for a realism most filmmakers flinch from; there’s so little that’s cute or sentimental, I had to check to be sure Iris Gilad and Calvin Dutton, who play Deedee and Willy, were actors.

American cinema never got into social realism. Italian neorealists like De Sica, Rossellini and Fellini had counterparts in British "kitchen sink" auteurs such as Tony Richardson and and Lindsay Anderson in new-wave film movements everywhere in the world but here. Such films show people trapped by income, education or family circumstance who don’t get rescued by upward mobility or the kindness of strangers. In America the idea of anyone being trapped in the system is heresy, but after 40 years of political and economic stagnation that may be starting to change.

Mainstream American film critics hate to see even a hint of politics in a movie. Nobody likes being preached to outside of church and many of us resist it even there. "Bad Hurts" will find its audience precisely because it doesn’t preach or peddle bogus answers. In the end, it even uplifts. That’s’ something American filmmakers could bring to social realism; a little more hope, of whatever sort. The Kendalls seize on the only solution available to them, the redemptive power of love, but their audience will note lots of stuff in the world around them that needs fixing.

We need films to challenge and provoke as well as entertain us. With politics so empty and corrupt, we need art to get us talking again about stuff that matters. When political democracy is dying, cultural and economic democracy may bring it back to life.

The journey indie films must travel to find audiences can be rough. "Bad Hurts" premiered at Tribeca. Next weekend it will screen at the Berkshire International Film Festival in Great Barrington, Massachusetts. Allen, who lives nearby, is a driving force behind the festival. I spoke this week to her and to Kelley Vickery, the festival’s founder.

Vickery says she got the idea for the festival a dozen or so years ago. As a newly single mother of three in dire need of a job, she says she decided to create one for herself by starting an international film festival in a town of 7,000. She hooked up with Allen and a handful of other local cinephiles and somehow made it work. This weekend thousands of film lovers will descend on the town to celebrate the festival’s tenth anniversary.

Vickery’s story of how the festival came to be is  funny but only partly true. Independent film attests to the fact that people will work endless hours to produce work of great value for motives that may include but always transcend financial reward. After "Raiders," Allen's love of live theater drew her to the Berkshires. She liked what she found there so much she never really left. Like the films it showcases, the festival is the work of people in love with art and the world around them. It's like life. Nobody's in it just for the money.

Global entertainment corporations sell fantasy. Great films are made by artists less focused on the gate. It is by such people that our culture, economy and politics may be rebuilt. You can see it happening next weekend in the Berkshires. Along with "Bad Hurts" and other great fictive work there are powerful documentaries, including one on the blood feud between Gore Vidal and Bill Buckley and another on that rather undiplomatic diplomat, Richard Holbrooke, directed by his son. Our politics has become a fantasy. If you want to know what's happening to American families, if you want to get a real political conversation going, try the movies.