"Are you the nanny?": The awkward encounters of a mixed-race family in the suburbs

I try to handle people's questions with poise. But I wonder: Why am I trying so hard to put THEM at ease?

By Krystal A. Sital 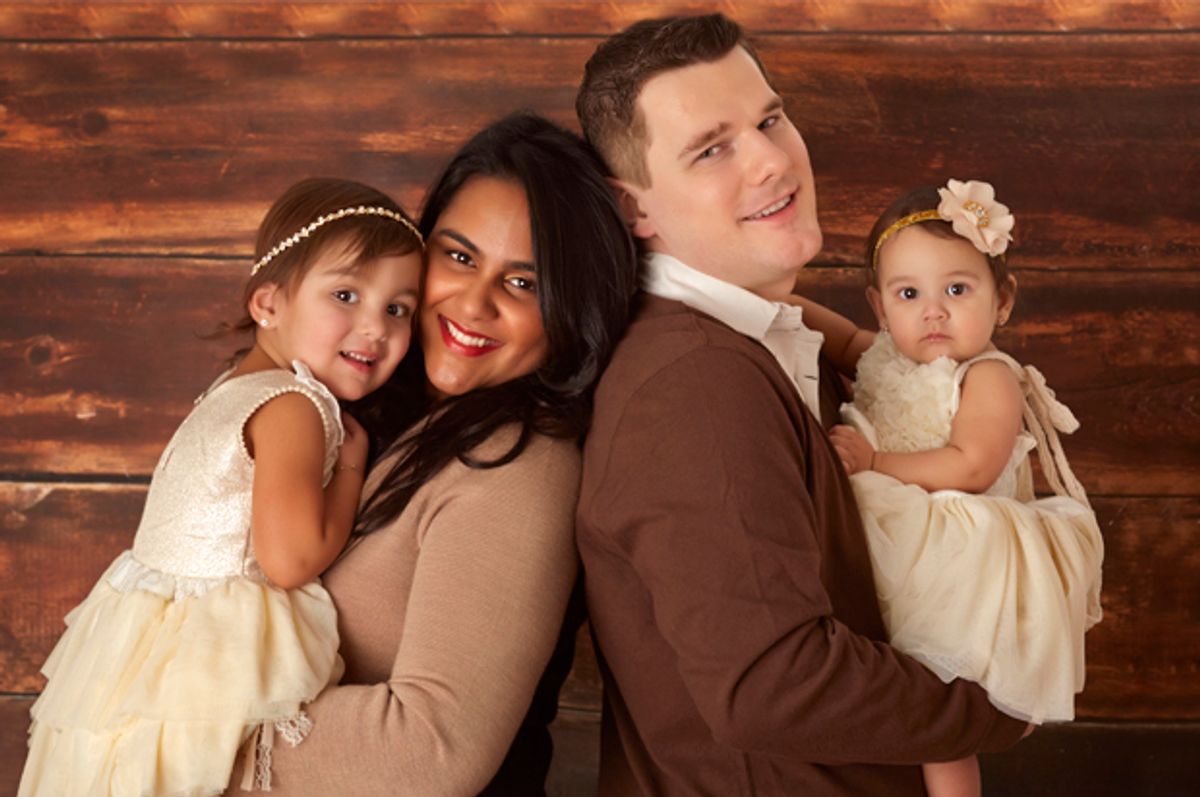 A photo of the author with her family (Elwira Katarzyna Maciejewski)
--

We’ve shared backyards for over a year now, I wanted to scream. But my kids and I had been having a good day, one of our most successful since my husband went back to work. Rearing two under 2 had proven brutal, and I was determined not to let this woman ruin my magnanimous mood.

“Their father is white,” I explained.

“Oh. They have nice skin and nice hair,” she said, stroking both my daughters, one of whom was wrapped around my torso and fast asleep. My older daughter pulled away from her touch, and I was happy one of us showed displeasure at this exchange. I pushed the stroller in the direction of our home.

“What’re their names?” she asked.

Her attempts to change their names to Amy and Emily after that were just painful. I started walking away. “Come and visit me again,” she said. Yeah, right, I thought. At the top of my list, lady.

I’d wanted to move to the sprawling suburbs of New Jersey. No, I yearned to move. I wanted to leave behind the urban environment I’d called home for a decade and a half after immigrating to the States from Trinidad. Bayonne is a peninsula jutting out into the Hudson Bay with dwellings gradually towering higher and higher, becoming more of a city than a town. I lived with my parents and sister in a fourth-floor walk-up with two apartments on the same floor, like every room had been chopped in half; hangers couldn’t fit into our closets without being jammed in sideways. After a while, we pulled the door off its hinges. There was no yard, only a window that overlooked the narrow street below, where shattered beer bottles from nighttime bar fights glittered like jewels beneath both the sun and moon.

When my husband and I started looking for a house, it was no surprise I wanted the front yard, the backyard with the play set, the quiet, the green, and apparently the prejudices that came with that neat little package. Upon moving, people had begun to reveal their true nature in the most peculiar ways. We were now the interracial couple when, where we lived before, that was the norm. Never having to consciously think of ourselves in that context, I was now painfully aware I was a brown woman with a white man.

We met in high school after he moved from Poland to Brooklyn to Bayonne and after I hopped from Trinidad to Jersey City to Bayonne. That little town, predominantly white before our time, had become a true melting pot. My mother, an actual nanny working only 15 minutes from where we moved, warned me before we took the plunge that I would come to regret leaving Bayonne for the suburbs. Time and time again those words would echo in my head like waves cracking against a coastline: “They’re going to think you’re the nanny. Trust and believe what I say. I’ve been working in these towns for more than 10 years.” I thought, it can’t be that bad. It was. The more subtle it was, the more I noticed it, the more other people noticed it, and the more awkward it became.

At meet-ups, play groups and libraries, mothers with the same skin tones as their offspring (typically white) give me second and third looks. Is she the baby sitter? Is she the mother? Sometimes these questions are tossed into the conversation, sometimes these questions are at the crescendo of our exchange, and sometimes (believe it or not) people just open with them. I doubt my interrogator feels a fraction of my discomfort, never having to endure it several times a day.

Now all too familiar with inquisitive looks, I focus on playing with my children, watching them interact with others the way only children can — throwing books and blocks, stealing puzzle pieces from one another, and rolling on the floor chewing on crayons. Then I lean back into the world of adults—more scrutinizing glances—while my 2-and-half-year-old, curious as ever, can easily ask another kid, “Is that your mommy?” And no one thinks anything of it. From the mouths of children—innocence, curiosity. From the mouths of grown-ups—discrimination.

I understand that in the suburbs, people assume any woman of color with white children is the nanny, because a high percentage of them actually are, but upon closer inspection, my children really look like me. There is absolutely no mistaking it. Still, no one bothers to look that closely.

After story time at the library one day, my older daughter, Amelia, ran up to me screaming, “Mommy! Mommy! Mommy! Look at this.” A few mothers, caregivers and nannies looked in my direction with that look of bewilderment I’d come to know so well. Why is this little strawberry blond, white girl calling that brown woman mommy?

Later, a mother approaches me while her toddler bangs blocks together nearby.

“Yes, I live in town,” I say, fiddling with one of my daughter’s hair.

“Oh, I live in town also, walking distance. Do you come to story time often?”

“Whenever we make it out the door in time,” I say with a laugh.

I let her flounder.

“Yes,” I say when what I’m really thinking is how would she react if I nudged my chin to her kid and asked, “Is she yours?”  Once her curiosity was extinguished, so was our conversation.

It’s not only the white suburban moms who are confused by my role. So are the women who share my homeland, a confusion that is even more painful. Women from the Caribbean seek me out in parks and libraries only to introduce themselves with, “So how long you with this family? They treat you good?”

Each time, no matter the situation, I handle it with as much dignity and poise as I can muster, “Oh no, I’m their mother. Their father is Polish. He’s very white, pasty white, practically glows in the dark,” I say, making a joke, trying to put them at ease, always angry with myself after for doing this.

It’s hard to be new anywhere, but I’m tired of being the one to carry the embarrassment and the self-consciousness of these inquiries. So when Amelia seeks me out one day, squealing with a new discovery, “Mommy! Mommy! Mommy!” and the inevitable gazes find me, this time, I do something that has been stewing in me since my first encounter with discrimination. This time I want to put them in their place.

My baby daughter, Emelina, claws at my chest as she always does whenever she smells me, and with the swiftness of a ninja (and months of practice), I unclip my nursing bra, let loose my ample bosom, and bring her mouth to my nipple while saying to Amelia, “Beautiful job. Do you want to color another picture for Mommy?” I allow my eyes to travel from woman to woman until they drop their gaze. Let them feel the shame for a while.

By Krystal A. Sital

Krystal A. Sital is the narrative nonfiction editor for the international journal The Missing Slate, the prose and blog editor for Vine Leaves Literary Journal, and the editor for Mothers Always Write. Done writing her memoir, she’s looking for an agent and can be found on twitter @krystal_a_sital.

MORE FROM Krystal A. Sital