The finale kiss: Why it's so satisfying to fade to black with a perfect, innocent climax

Season closers — and even series finales, like "Mad Men" — can go out on a high note with a long-awaited kiss 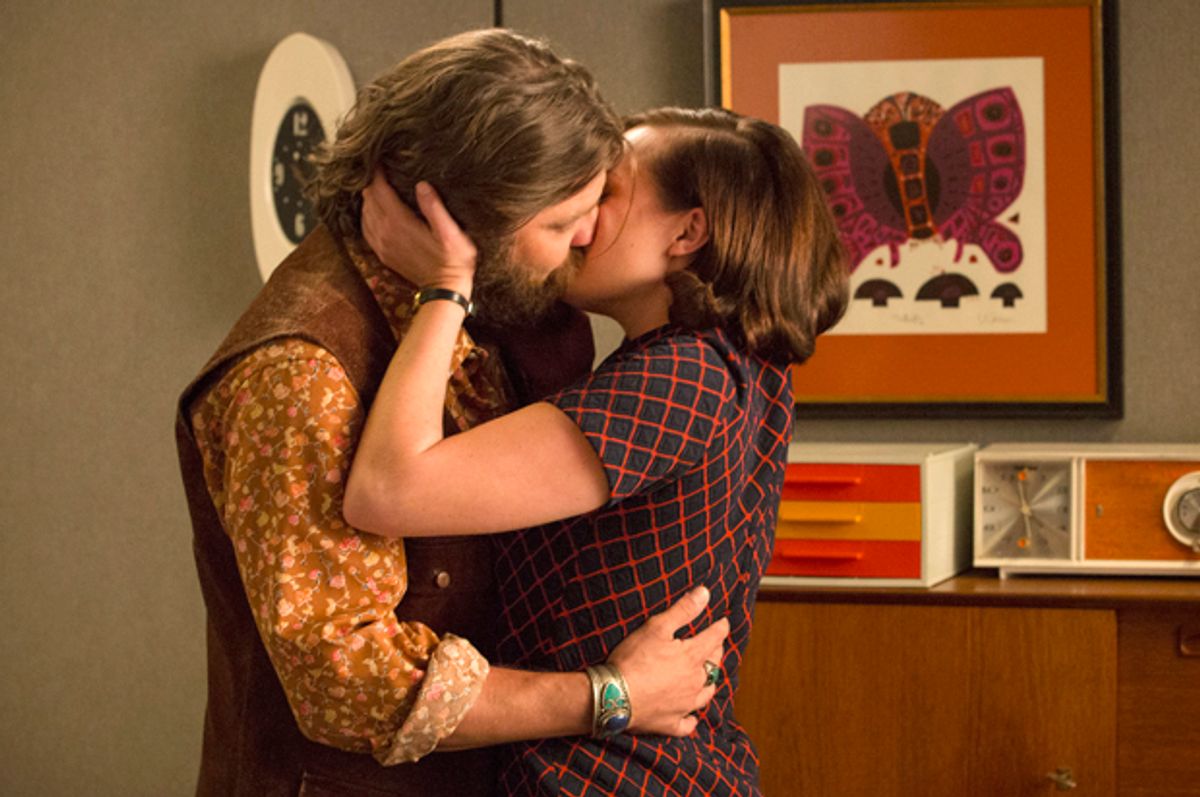 Spring is the time for kissing. In real life, hopefully; on television, definitely. The end of May is the traditional end of the TV season, which means that countless long-simmering crushes strategically boil over sometime in the few weeks around Memorial Day. And for various reasons of both convenience and convention, it doesn’t quite feel like anything happened until it’s sealed with a kiss.

The most commented on of these, recently, is the very long-awaited kiss between Peggy Olson (Elisabeth Moss) and Stan Rizzo (Jay R. Ferguson) in the “Mad Men” finale last Sunday. For a show that has made its mark on being unconventional, “Mad Men’s" Steggy denouement was a cookie-cutter finale finish: overtures of intimacy, ruffled feathers, brief distance, heartfelt conversation and, you guessed it, the kiss. It was adorable and cheesy and funny and awkward, which is a bit how these things go in real life, too. Another fantastic example is the much-anticipated Amy Santiago (Melissa Fumero) and Jake Peralta (Andy Samberg) kiss on “Brooklyn Nine-Nine,” which is actually not just one, but three. Two are decoy kisses, undercover: Jake kisses Amy to avoid suspicion, and a few hours later, she does the same to him. The third is nothing of the sort—Jake fidgets with his hands, because nerves; because this time, it’s real.

Of course, kisses throughout the season are always fun: Ross and Rachel’s momentous kiss in “Friends” was early in the second season (although she imagined a pretty vivid kiss in the season one finale, “The One Where Rachel Finds Out”); “New Girl” managed to arc out its best season around Nick (Jake Johnson) and Jess (Zooey Deschanel) kissing in the 15th episode, “Cooler.” "Grey’s Anatomy’s" first-season kiss between Cristina (Sandra Oh) and Burke (Isaiah Washington) was a series high. And now that more and more shows hype up midseason finales, that’s also often a moment for a bit of face-smushing—“Alias,” “Jane the Virgin,” “The Mindy Project.”

But there is something especially poignant about the finale first-kiss. I’ve written often on how television requires a long-term investment from its fans, because it can stretch on for years on end (as “Mad Men” did). The finale kiss is, in some ways, the most televisual element of fandom—it’s a narrative structure that implies release after a long stretch of waiting, one that takes the viewers on nearly every step of the years-long journey of two people falling in love. It’s also a plot device that puts the “final” in “finally”—whether that’s sending two characters off into the future together, or, more often, putting a pin in the show’s storytelling for the summer hiatus.

And perhaps as a result, finale kisses capture the imagination. Even if you’re not what the fan community fondly and derisively terms a “’shipper,” there’s probably some squishy place in your heart created by the linking up of two adorable idiots who clearly needed to kiss each other forever. Maybe it was Will (Josh Charles) and Alicia (Julianna Margulies) in “The Good Wife’s" second-season finale, or Sam and Diane at the end of the first season of “Cheers.” The main pair of “The X-Files,” Mulder (David Duchovny) and Scully (Gillian Anderson), have more than a few kisses that don’t “technically” count; their first romantic kiss is in the eighth-season finale. Shows as diverse as “Buffy: The Vampire Slayer,” “Bones,” “Futurama” and “Community” have delivered on finale kisses. It’s in television’s DNA. But though it is such a prevalent phenomenon, it’s harder to explain exactly why it’s so captivating. Is it just that we like happy endings? Or are we just getting off on someone else’s sexual chemistry? Watching other people kiss might be a way of distracting us from our own loneliness or romantic complications; it could also be a way of validating the audience’s superiority, as we watch two people run headlong into something that will be undoubtedly messy.

It’s probably a little bit of all of these things. Finale kisses are a kind of rejiggering of the arc of a traditional Greek comedy, which are supposed to end with a wedding; both offer up a narrative of consummation for the audience to vicariously participate in, with romance’s whole array of associations and implications.

But I think it’s more, too. To my mind, the gold standard of finale kisses is in the second-season finale of the American “The Office,” between Jim (John Krasinski) and Pam (Jenna Fischer). (And my bias is showing: Michael Schur, the creator of “Brooklyn Nine-Nine,” was a producer on “The Office.”) It’s a recent example, being just under a decade old, but it’s damn-near perfect. The show, at that point, had been building up to Jim finally telling Pam how he felt for two whole seasons; things come to a predictable head when Dunder-Mifflin hosts a charity casino night where everyone dresses up and gets a little drunk. In the parking lot outside, Jim finally tries to articulate some of his longing, and Pam rejects it, frantically pulling at her engagement ring the entire time. He tears up, and, voice breaking, takes his leave. The next scene with them is through the blinds, inside the office. It’s empty and dark except for Pam, who is leaning against one of the desks, talking to her mother on the phone. She’s trying to explain to her mother that she doesn’t know how to feel about her best friend confessing this to her. The door opens, and Jim walks in. It’s around then you notice that Pam’s not just leaning against anyone’s desk—she’s using Jim’s desk, her second home in the office. She starts trying to say something, but before she can get a sentence out, he just kisses her. It’s tender. It’s soft. It’s very loving. And then, in the split second after they pull apart and stare at each other, trying to figure out what to do next, the episode ends.

Did I just relate that from memory? Oh, absolutely. But here’s the thing: Neither Jim nor Pam, individually, could have described what happened in that scene in a way that agreed with each other. They’re completely wrapped up in their moment, and though they might remember it forever, they can’t stop, and rewind, and watch it again, like I can; they can’t possibly remember things like exactly how Pam’s hand looks as she’s kissing Jim back, because neither of them is looking at Pam’s hand. In our own lives, we will never know how our hands look, in that moment. But in other people’s lives, we can know it completely.

And shed of context, it’s shed of its complications, too. Kissing a co-worker, telling your best friend you love them, getting back together with an old flame—these are actions with consequences, not all of them pretty. Time doesn’t stop, in real life, when you kiss someone for the first time—even if it is your soul mate. Life keeps happening. Problems will crop up, and continue to crop up. And even on television, that first kiss usually ends up paving the way for a lot of drama: some fun, some less so.

But that kiss can remain perfect. The word “perfect,” actually, comes from the Latin “perfectus,” meaning both “exquisite” and “completed.” The implication is that something without flaw can’t be in the present tense—it has to be past tense, it has to be finished, because change would destroy the perfection. In real life, we don’t get perfection—or if we do, we definitively can only know after the fact. On TV, we can see a moment of perfection happen, and though it does have to end at some point, it’s preserved; we can go back and watch it again.

The kiss as a moment of final intimacy, then, is not just triumphant, it’s also not just a little sad. Something is gained, but something is lost, too; there’s this fear, I think, both on the part of the show’s writers, its audience, and even the characters themselves, that it’s all downhill from here. (The much-discussed “‘Moonlighting’ Curse” is used to discuss how viewers’ interests—and writers’ creativity—can fade after that one monumental kiss.) The HBO drama “Deadwood” ended its first season with a kiss—well, not just a kiss, but a kiss and some lovemaking—between Seth (Timothy Olyphant) and Alma (Molly Parker). And then they never spoke of it again. The world had different rules, sure. But on some level, it was also an effort to preserve the sad beauty of that one night.

And yet in terms of story, the kiss is one of the best ways to go out for the summer. Because though a kiss signifies the end of something, it indicates the beginning of something, too. It’s both a resolution and a cliffhanger; both a confirmation and a question. It’s both a perfect moment and a moment about to be lost in time. And it makes an excellent fantasy for daydreaming, as we all strive toward our own little moments of perfection.