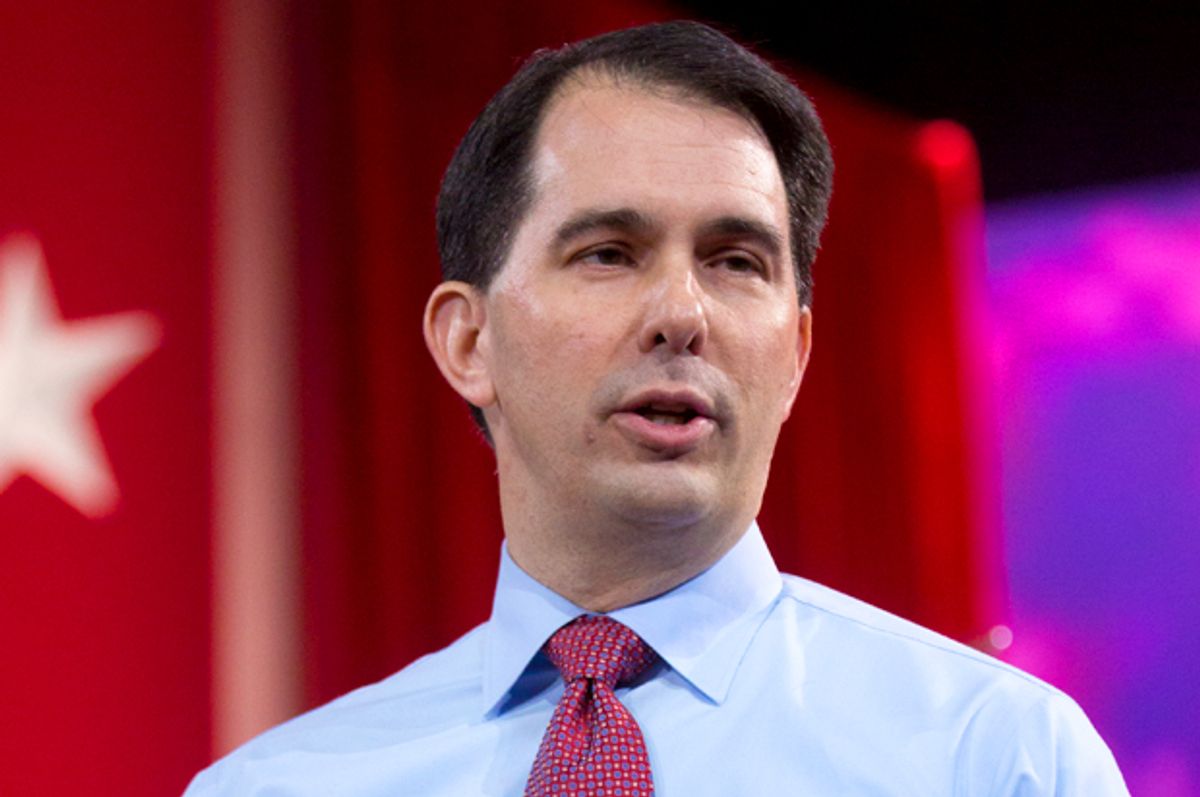 Last week my colleague Simon Maloy caught us up with the latest on Kanses Gov. Sam Brownback's famous Arthur Laffer "petri dish" experiment, in which he slashed taxes and government programs in order to usher in a Republican free market economic utopia. The experiment looks like it's blowing up the lab:

[T]he Brownback/Laffer tax scheme hasn’t goosed the Kansas economy and it doesn’t look like it will any time soon. It has succeeded marvelously, though, in redistributing wealth to the top of the income ladder, while, at the same time, screwing over the people at the bottom. While the rich soaked up the lion’s share of the tax windfall, the poorest Kansas families actually saw their tax burden tick up a little bit.

And when it comes to screwing the poor, Kansas Republicans are proving to be among the more creative and heartlessly depraved groups of legislators in the country. Last month, the Legislature passed a resolution barring welfare recipients from spending their benefits at swimming pools, movie theaters, casinos, tattoo parlors, and strip clubs. It’s a dehumanizing and paternalistic policy that assumes the poor are undeserving of simple diversions like going to see a movie, or are scamming the government to finance their gambling and/or stripper habits.

And that's not all. He points out that Brownback and company have devised one of those cunning Scrooge-like plans to take money that's needed to put food in little children's mouths and give it to big banks. Here's how Max Ehrenfreund at the Washington Post described it:

A dollar bill is a special kind of thing. You can keep it as long as you like. You can pay for things with it. No one will ever charge you a fee. No one will ask any questions about your credit history. And other people won't try to tell you that they know how to spend that dollar better than you do.

For these reasons, cash is one of the most valuable resources a poor person in the United States can possess. Yet legislators in Kansas, not trusting the poor to use their money wisely, have voted to limit how much cash that welfare beneficiaries can receive, effectively reducing their overall benefits, as well.

The legislature placed a daily cap of $25 on cash withdrawals beginning July 1, which will force beneficiaries to make more frequent trips to the ATM to withdraw money from the debit cards used to pay public assistance benefits.

Since there's a fee for every withdrawal, the limit means that some families will get substantially less money.

Imagine making it so that banks can collect extra fees from mothers with small children who are trying to feed them on less than four hundred dollars a month. How cruel do you have to be to think that making them only carry 20 dollars cash will somehow teach them a lesson?

But this is what's happening in states governed by miserly Republicans who are determined to wring every last dime out of people who have nothing and give it to people who have more than they can spend in a lifetime. In Scott Walker's Wisconsin, for instance, they are making long lists of prohibited foods for those who use SNAP (Supplemental Nutrition Assistance Programs.) The list of other prohibited purchases includes “herbs, spices, or seasonings,” all nuts, red and yellow potatoes, smoothies, spaghetti sauce, “soups, salsas, ketchup,” sauerkraut, pickles, dried beans sold in bulk, and white or albacore tuna.

They were particularly adamant that nobody on the program be allowed to eat shellfish, lobster in particular, which seems odd considering that it's Wisconsin and the lobster catch there is decidedly small. (In fact, it's non-existent.) I'm sure you'll be surprised to learn that this lobster hysteria stemmed from a Fox News documentary which seems to have been the catalyst for these crackdowns on foodie welfare cheats. Media Matters reported on it back in 2013:

Prior to its August 9 airing, Fox News hyped the special, "The Great Food Stamp Binge," on Fox News Insider, FoxNews.com, and several of its daytime shows. Each preview focused on Jason Greenslate, a freeloading surfer who Fox correspondent John Roberts interviewed in Southern California. FoxNews.com described Greenslate at length in an article that teased the "new documentary":

"The Fox News Reporting documentary profiles, among others, a California surfer and aspiring musician named Jason Greenslate. Greenslate shows how he supports his beach-bum lifestyle with food stamps, while dismissing the idea of holding down a regular, steady job.

"'It's not that I don't want a job, I don't want a boss. I don't want someone telling me what to do. I'm gonna live my own life,' Greenslate tells Fox News' John Roberts. 'This is the way I want to live. And I don't really see anything changing. I got the card. It's $200. That's it.'"

As promised, "The Great Food Stamp Binge" labeled Greenslate "the new face of food stamps," devoting two full segments to his lifestyle in a shameless attempt to characterize SNAP recipients as freeloaders.

Yes, he was shown eating lobster on screen. Since Fox News viewers are the most misinformed people in the universe (well, America anyway) and elected Republicans seem to be among Fox News' most ardent fans, it stands to reason that some California surfer hippie refusing to work would inflame them so much that they couldn't see past it. Fox even had staffers deliver copies of the documentary to members of congress prior to a vote on cutting food stamps, just to make sure that hippie didn't go unnoticed by even one Republican. You can bet it's made the rounds of all the state houses as well.

But then Fox has been on this beat for a long time. In fact, Sean Hannity has railed about this for years:

I don't believe people are going to bed hungry. Do you know how much, do you ever go shopping? I go sometimes but I hate it. Do you ever go? ... you can get, for instance I have friends of mine who eat rice and beans all the time. Beans protein, rice. Inexpensive. You can make a big pot of this for a week for negligible amounts of money and you can feed your whole family.

Look, you should have vegetables and fruit in there as well, but if you need to survive you can survive off it. It's not ideal but you could get some cheap meat and throw in there as well for protein. There are ways to live really, really cheaply.

Sorry Sean, but Wisconsin believes that dried beans are a luxury item. Still, it's always thoughtful when people who reportedly make 10 million dollars a year for jabbering on TV take the time to provide recipes for poor people to live on negligible amounts of money for food. He's just that kind of guy.

The truth, which Fox News and these Republicans are uninteresting in hearing, is that the program has less than a 1 percent fraud rate and nearly half the recipients are among the working poor. Many of the rest are children, elderly and disabled people.

We've known for some time that conservatives consider things like cellphones and air conditioning to be luxury items which poor people don't deserve. Now they've decided that food is a luxury item as well, at least any food they deem them unworthy of eating. In fact, it's pretty clear that the right simply believes low income people don't know what it is to suffer and so need to be given some tough love. They don't understand the meaning of responsibility the way that people who have money for food do. So taking away their money for food and restricting what they are allowed to eat will teach them that.

Meanwhile, Michelle Obama's Stalinist plot to encourage children eat their vegetables must be stopped at all costs. And it's not because they think taxpayers shouldn't be paying for kids to eat luxury tomatoes and fancy green beans. It's because big government has no business telling people what they should and should not eat. Why, they think that's downright un-American. Imagine that.