Why write a collaborative novel? Well ... why write alone?

Writing is lonely. Writing together has deepened our friendship -- not to mention cutting the workload in half! 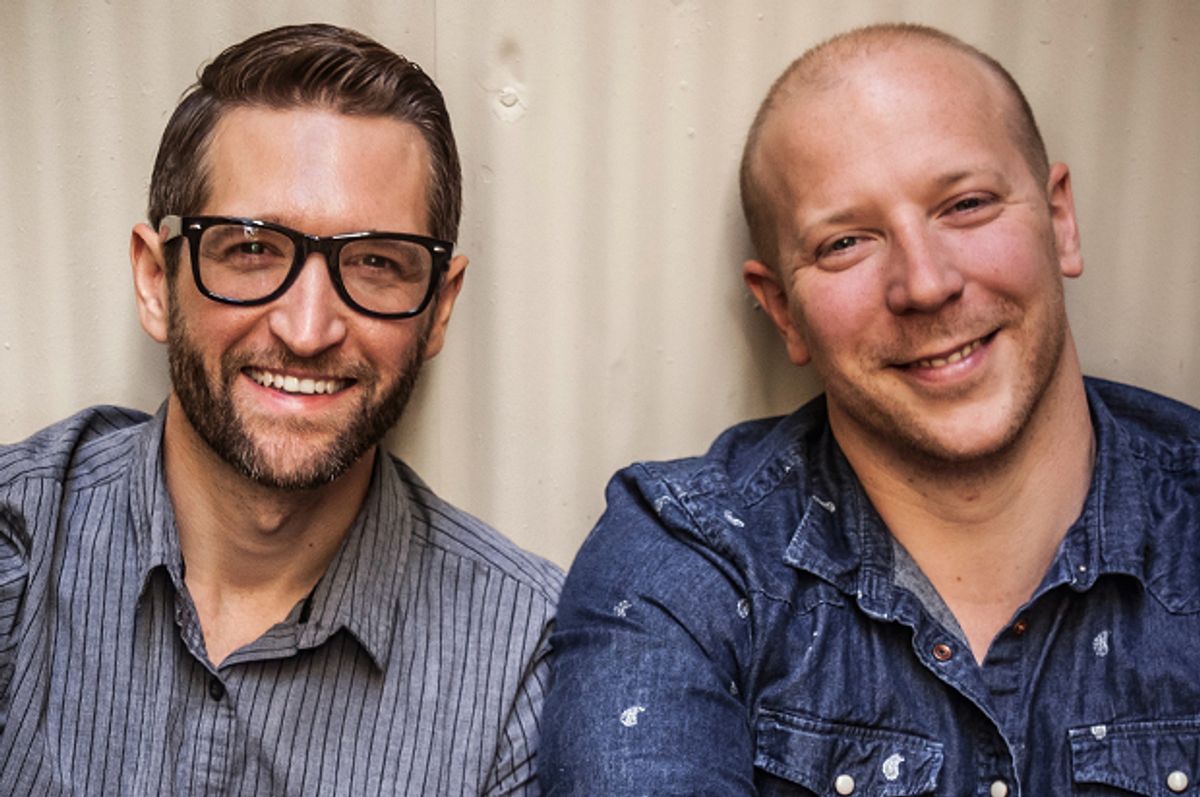 When we tell people we’ve co-authored a literary novel, the first thing almost everyone says is: “And you’re still friends? How on earth did you manage that?” It’s as if they imagine collaborative fiction as a kind of three-legged race: goofy and fun at an office picnic, but ill suited to a serious runner.

It’s a strange reaction, given that successful collaborations abound in music and film.

Is writing fiction really all that different? We gave early drafts of our manuscript to friends. We asked our significant others to scrutinize our female protagonists, and the novel further improved in the deft hands of our editor. So one answer to the question of how one writes a collaborative novel is: All writing is collaborative.

The more personal answer is this: We’ve been friends for years and in the normal course of hanging out, we crack jokes, and the jokes become stories; plot arcs and characters arise. At some point, we write down a bunch of notes and Chris, who’s borderline OCD, will organize our plot outline in a hyper-detailed spreadsheet. Then we’ll divvy up scenes and draft them. Gavin, at this point, will write scenes not in the goddamn outline! But this is good, as it forces us to continually rethink the plot as we write. Our personalities meet in the middle with a balance of caprice and control: We play against type when it comes to writing, as the poet is the taskmaster and the military officer is the scatterbrain.

Our collaboration began 10 years ago, in Rome, on a pilgrimage to Keats’ grave as part of an undergraduate study abroad. We had known each other only a few weeks, and were already starting to annoy our classmates with our constant patter and inside jokes. While wandering through the Protestant Cemetery, the names of the dead called out to us: Baltimore Gosshawk Wakefield III, Aeneas MacBean Esq. They were begging to be turned into silly characters in a pulp historical mystery novel! So we wrote one. It took us five years and it eventually ended up in a drawer, but it taught us how to write and how to write together. Over the last five years, we applied those lessons to a more serious project: "War of the Encyclopaedists."

With this novel, which is based to some extent on our lives, there was an easy dividing line: Gavin would draft most (but not all) of the scenes set in the Baghdad occupation, and Chris would draft most (but not all) of the grad school scenes in Boston. Then we’d edit each other’s work, swap and rewrite, swap and rewrite, each scene affecting the others in what we imagine is the normal evolution of any novel. For key scenes—especially at the beginning and end—we actually sat at a table with one laptop and passed it back and forth, one of us typing and the other dictating. This is perhaps the part that is most unfamiliar to solo writers. It works for us because we have similar tastes and senses of humor and because we’ve developed a common narrative voice through years of collaboration.

Seriously? There are a dozen good reasons. It cuts the workload in half, it forces us to tackle social and political themes with a higher degree of complexity, it even gives us plausible deniability (“No, Mom, I didn’t write that line; it was Chris!”). With two authors, every scene must ring true to two perspectives instead of one, every sentence must please four ears instead of two, and it’s so much easier to kill your darlings: you just close your eyes and let your co-author delete them for you.

Having a co-author also makes it much easier to follow that classic fiction writer’s dictum: plot follows from character. You might think that two people writing one book would inevitably run into intractable disagreements. We do disagree, from time to time, but in the process of resolving our disputes, the book improves: for the way out is to make character the final arbiter of plot decisions. There’s no better way to sap the life from your narrative than by forcing your characters to obey your will. The characters should move through the world according to their own wills, not the authors’.

Perhaps the greatest benefit of having a co-author is that it gets us used to the idea of sharing control, which helps us be more receptive to the input and needs of other stakeholders: agents, editors and (most important) readers.  Writing is an act of communication, and since the finished product is not meant to exist in a vacuum, why should it be created in one?

When we’re feeling snarky, there’s one more answer we’ll give to the question. “How do you write together?” they ask. "How do you write alone?" we say. Writing is lonely. Everyone should get a co-author!

This sometimes gets a laugh. But in truth it’s the most sincere answer we could give. Writing is a lonely art, for most writers. We respect the drive and psychological stability of those who accomplish it in solitude. We doubt we could handle it. Several years ago, as we struggled toward a finished draft of "War of the Encyclopaedists," Chris fell into an existential pit. He was thinking about culinary school, his five-year relationship dissolved, he was living out of a suitcase at one artist colony after another, he wrote a collection of nihilistic sonnets, he was thinking about suicide. Without stability, his options were limitless; he was paralyzed by choice, staring at a Denny’s menu with infinite pages, finding nothing appetizing. Gavin, meanwhile, was looking toward his future as a lawyer with dread. This wasn’t the life he’d imagined for himself. He had little time to play music or write fiction, which, though fun, was a big additional burden, as anyone who’s written while working full-time well knows.

And yet here we are, awaiting the publication of our debut novel. It’s almost too difficult for us to believe. Without Chris’ drive, organization and friendly harassment, Gavin would never have made the time to contribute. And without Gavin’s contributions, Chris would be staring into the void. It was writing a novel together—a novel with its fair share of buoyant humor, but weighted with the melancholy and trepidation of growing up—that deepened our friendship and changed the course of our lives. In learning how to write vulnerable characters, we strengthened our empathy muscles, and learned how to be vulnerable to each other.

"War of the Encyclopaedists" by Gavin Kovite and Christopher Robinson has just been published by Scribner.

Gavin Kovite was an infantry platoon leader in Baghdad from 2004-2005. He attended NYU Law and now is an Army lawyer. His writing has appeared in literary magazines and in "Fire and Forget," an anthology of war fiction.

Christopher Robinson is a MacDowell Colony fellow and a Yale Younger Poets Prize finalist. His writing has appeared in many publications, including the Kenyon Review and McSweeney’s.

Books Fiction Novels War Of The Encyclopaedists Writers And Writing