How to know if your dog is in pain: "With one lick to my face, Lucy gave me peace"

When I declined euthanasia for Lucy, friends admonished me. What is "too much suffering" when it comes to a pet? 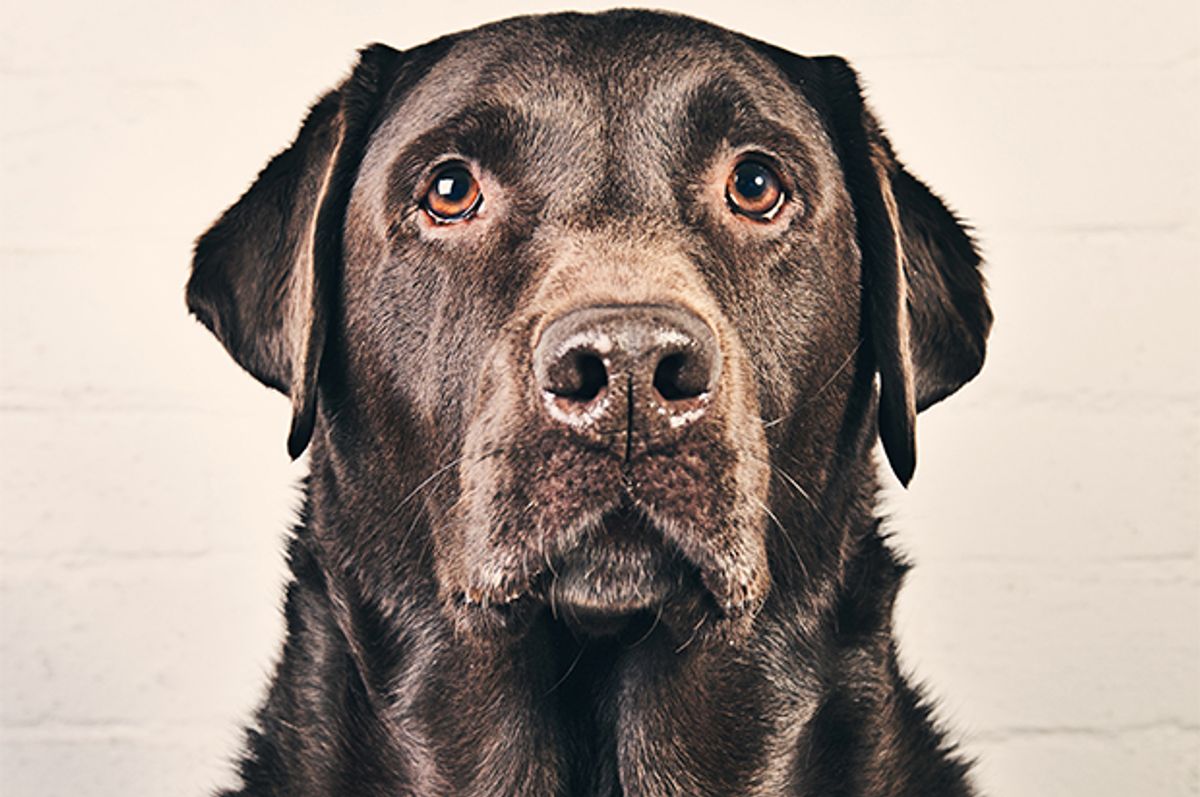 I am one of those extreme dog lovers and Lucy, my lab-mix, was one of those lovable dogs, her black silhouette my shadow. We ran, we traveled, and for 15 years, lived in a dozen great places from Cape Cod to Brooklyn to San Francisco.

Even dog haters were among her admirers; she was often what I deemed the “under-invited” guest to parties. It wasn’t, I reasoned, as she trotted into even to the most elegant events, that she was uninvited; she was simply my “plus one.” Thankfully, other than involuntary shedding, she was extraordinarily well behaved. By now you know I slept with her and kissed her in numbers I wouldn’t so much want to write about.

There are sticky sweet movies made about this story. They usually end badly, are clearly about love and loss, and guarantee waterworks. I never watch them.

Yet a few years ago when Lucy woke and didn’t immediately bark “Where’s breakfast?” or “What are we doing?” I knew the narrative arc: the vet, sad news, desperate measures.

As scripted, the veterinarian suggested an ultrasound, X-rays, and an exploratory operation. “Tumors, internal bleeding?” she guessed. By then Lucy could barely walk, but I decided against the options. “She’s about 100 years old,” I asked. “To what end?”

The surprised vet gave me the card of a colleague who did home euthanizing. Over the next week, Lucy rallied a few times and one day even chased sticks. Was she getting better? Sometimes I imagined she was.

I took to sleeping on the floor so I could change her wet diapers during the night, but within 10 days Lucy stopped walking. Friends and I carried her outside, folded in her bed like a taco. Lying on the porch, she barked at squirrels. Her thumping tail told us that she enjoyed special steak dinners and visitors. I don’t believe she was in much pain; when I sensed she was, I gave medication, even injections.

It was exhausting, but there was comfort in the single-focus nature of caring for her. I did not want to, as so many encouraged, make “that decision.” There were moments when I considered it -- like when I left for an hour and returned to find her smeared with feces and panicked. That day, the chorus of those who said “it’s time” rose to a din.

Everyone had a story of putting an animal down and many shared stories of “peaceful” passings. Lucy shouldn’t suffer, I was told over and over. But even after that messy day, after she was cleaned up, she’d relished a hamburger. She slept and dreamed. Of sticks? Frisbees? Curiously, her legs moved well when she slept.

Was she suffering? I was — from lack of sleep, from sadness and the confusion about what to do, or not do. People recommended more medical opinions; I made appointments with other vets, and broke them. After two weeks I called the original veterinarian, who was flabbergasted that Lucy was alive. Oddly, to me, she suggested an X-ray. Moving her seemed cuckoo.

I wondered if I would make “the decision” because of Lucy’s discomfort or my own? Life was inconvenient -- I was hardly able to work --but it was also sweet. And Lucy seemed happy. She wasn’t whimpering, and was even, from her bed, rather bossy. I Googled “how to know if your dog is in pain” and “how to put your own dog down.” Most results for the latter are not for the faint of heart. (Guns are involved.)

Intensified by sleep deprivation, my questions around “putting to sleep” widened: What is too much suffering? What makes a life “valuable”? These are questions at the forefront of elder care these days, but are they applicable to our pets?

A friend whom I know to be against the “right to die” was adamant I should put her down. And a neighbor opined that I was cruel to keep Lucy alive when she couldn’t walk.

But I remembered reading the obit of a successful writer who’d lived 61 years in an iron lung. Who defines quality?

Besides, Lucy continued to eat and thump.

On what would be Lucy’s last day, I awoke next to her in our makeshift hospice on the kitchen floor bed to hear her panting hard. When I turned toward her, Lucy licked my face. That was a first. She was never overly demonstrative with affection -- that was my role. I changed her bedding and offered her water. She turned away. With a dropper, I dribbled some into her dry mouth.

That morning she whimpered each time I left the kitchen. So I sat with her head on my lap, and called my friend Amy. Amy had been diagnosed with breast cancer but had refused orthodox medical treatments. A fierce lover of animals, Amy had been a touchstone in my deliberating about getting Lucy medical treatment.

“But she’s suffering,” I told Amy, with Lucy cradled in the nook of my arm.

“It’s not suffering, Louise,” Amy said, softly. “She’s dying. Creatures all over the world are doing the same thing right now.” Neither of us knew then that Amy would be gone in a year.

A few hours later I looked into Lucy’s cloudy eyes and told her I loved her. “Go,” I said, “I’ll be OK.” Her breath shifted, and within 20 minutes, her ribs stopped rising and falling.

Friends helped me lay Lucy out on a white sheet. Cremation was suggested, as her body cooled. “Burying her will be too hard for you,” I was told. But the idea of strangers taking her away was unbearable. In the growing dusk, friends dug a hole in my garden. Wrapped in the sheet, with red roses and a goodly chunk of brisket, a group of us lowered her into the ground. It was hard.

In the morning, we covered the mound with — and we laughed about it — fresh bark.

The $500 initial bill at that first veterinarian could easily have grown 20 times that with the same outcome. As always, Lucy had taught me things right up to the end: how to greet each day with optimism, how to be a friend, how to accept what is offered.

I, too, am approaching the age of leaving things behind -- my own versions of fetching and running; I no longer do handsprings, nor downhill ski.

I hope when it’s time that I will have the chance — by grace, timing or luck — to show those who have cared for me how much I have loved them.

With that one lick to my face, Lucy gave me that.

Louise Rafkin writes on lifestyle and relationships for the New York Times and the San Francisco Chronicle, among other publications.