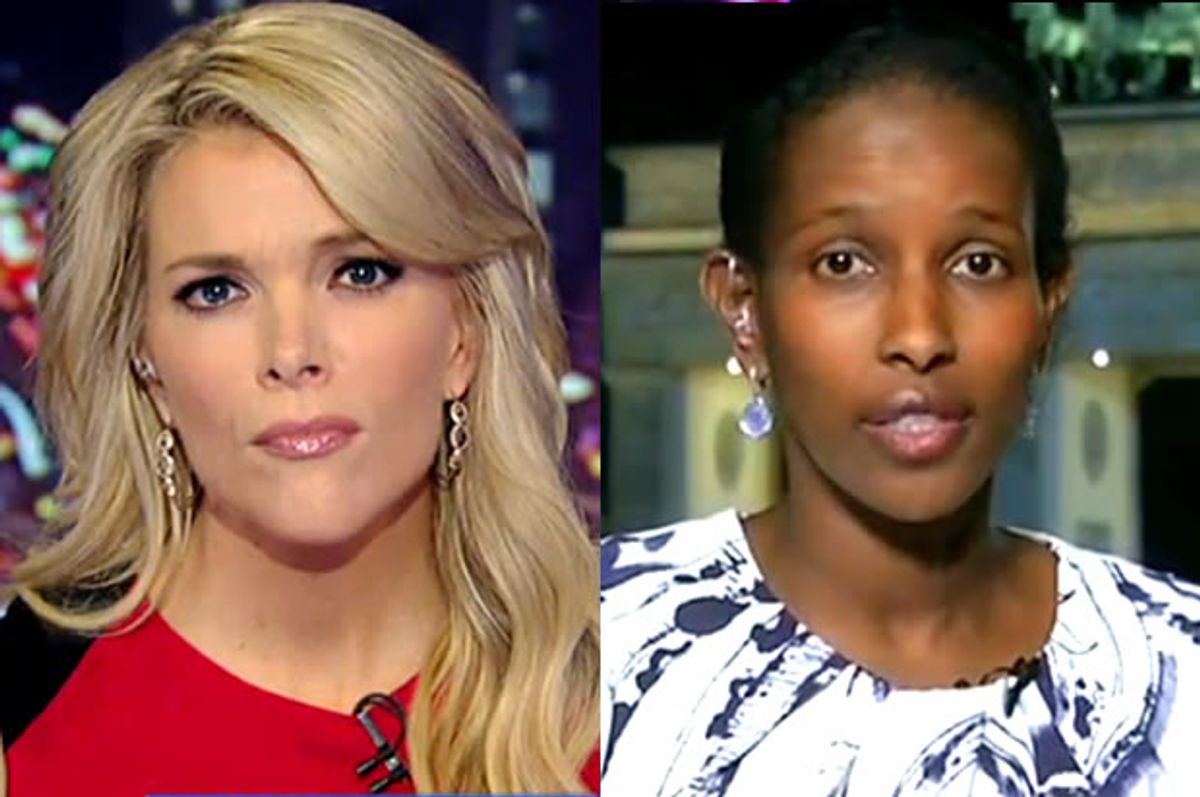 On "The Kelly File" last night, Megyn Kelly pretended to interview Haroon Moghul, a fellow at the Institute for Social Policy and Understanding, but in reality she merely offered him as a punching bag to anti-Islamic thinker Ayaan Hirsi Ali.

Moghul noted that Hirsi Ali has "no traction" in the Islamic community, so she isn't positioned to help create a reformist movement within it. In response to Kelly's question as to what "the solution" is to the problem of Islamic terror, Moghul said that there "is no single solution, because these are different societies in different places," but that democratic reform is where to start.

Kelly ignored his answer, saying "the problem is, people like Ayaan have come out and spoken out about their experience in the Islamic faith, especially about the status of women, and they receive death threats, proving her very point."

"It's unacceptable," Moghul replied, before Kelly cut him off and started talking about an FBI report about ISIS having a presence in all fifty states. Moghul noted that last year the FBI declared right-wing domestic terror groups the greatest threat to the United States, and Kelly attempted to corner him into saying that he believed that right-wing groups are a greater threat than ISIS.

Moghul smiled, only saying "you brought up the FBI, I'm just repeating what they're saying. I think we need to focus on both." He proceeded to cite a number of occasions in which Ali had conflated radical Islam with all Muslims, a charged she vehemently denied.

"I do not," she replied, before discussing how, in her latest book, "Heretic," she distinguishes between "Medina Muslims," who are "invested in jihad, Shariah law, and in life after death rather than life before death," and "Mecca Muslims," who are the peaceful majority. "What this gentlemen is doing," referring to Moghul, "is distract us from the fact that he himself may be a part of these Medina Muslims."

Aware that she had just conflated him with Islamic jihadists -- the very thing Hirsi Ali began by claiming she never did -- Moghul protested, saying "she just accused me of being a Medina Muslim, I mean this is exactly what I'm saying -- this isn't a serious conversation. The majority of American Muslims are fully integrated."

"So how are we going to confront the problem of radical Islam within the United States?" Kelly asked.

"There isn't one," Moghul replied.

"You just said there was!" Kelly shot back.

Kelly said that since he initially claimed that radical Islam is a problem in the United States -- which he never did, it was Kelly who mentioned the FBI report on ISIS -- his credibility was diminished. "You're not the one who's serious!" she said.

Watch the entire conversation -- serious or not -- below via Fox News.