The right's dangerous anti-Obama deception: Why attempts to paint him as anti-Israel come with major risks 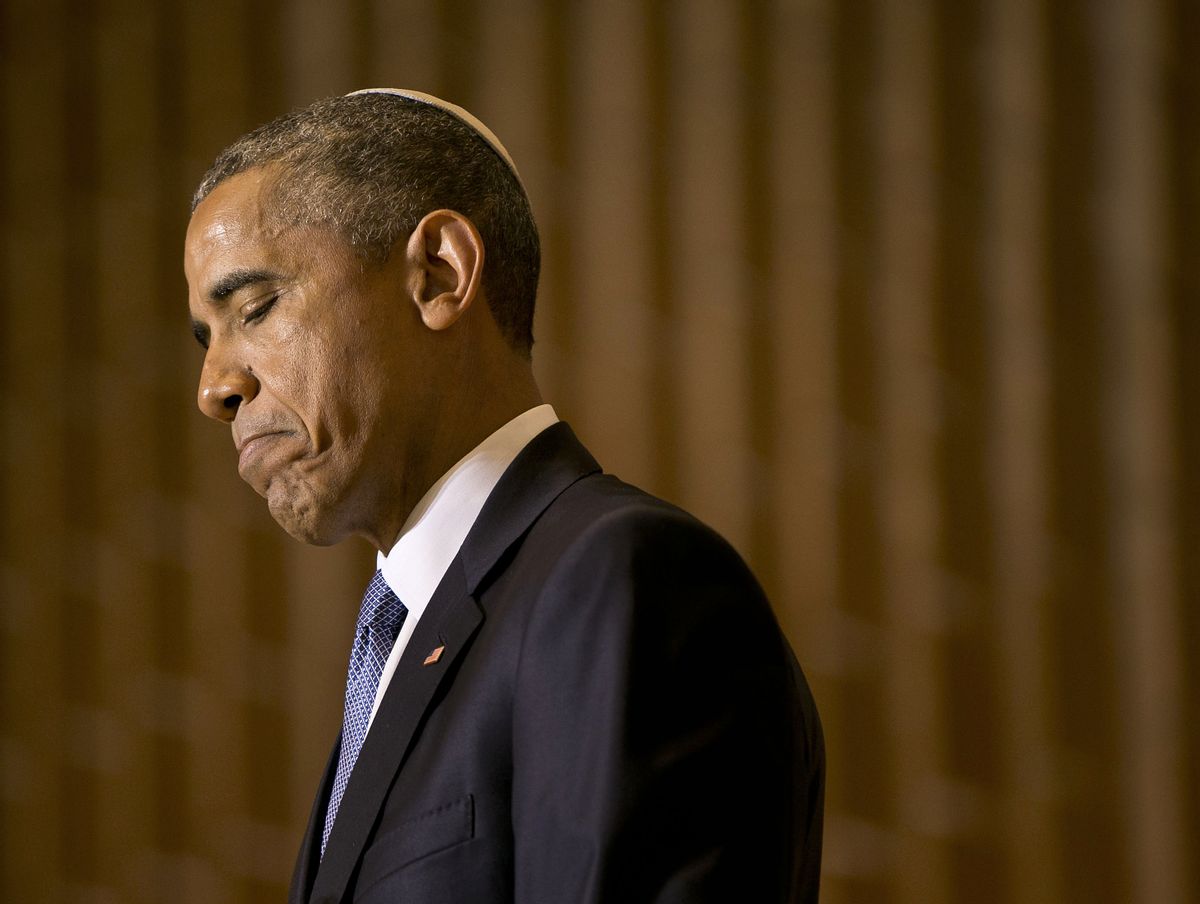 Wearing a blue suit and white yarmulke, President Barack Obama took to the bima at the Adas Israel Congregation in Washington, D.C., on Friday to stress his personal ties to American Jews. The president rattled off Jewish anecdotes, praised Israeli heroes, joked about former Chief of Staff Rahm Emanuel and even sang "Shabbat Shalom" with a group of schoolchildren. Obama's message to Jews, he noted in an interview with The Atlantic's Jeffrey Goldberg before speaking at the synagogue, was simple: "I've got Israel’s back."

The far-right of American Jewry would have you believe that Obama is lying. As the Iranian nuclear deal inches toward completion, you're going to hear increasingly unhinged howls from vocal conservative Jews. Sheldon Adelson, John Podhoretz, William Kristol, Jonah Goldberg — all and more will suggest that Obama is a radical leftist actively seeking the diminishment of Israel. That claim is often backed with a second, more subtle one: Not only does Obama disdain Israel, but that American Jews also disdain the president.

Both arguments are false. They're false not because criticisms of Obama's nuclear deal are illegitimate — much of the still-unfinished agreement could come down to close judgment calls — but because any fair accounting of the president's record, biography and words show that he is deeply invested in protecting Israel from its foes. To say otherwise is not merely incendiary political posturing: It's outright trafficking in conspiracy theories.

It's not for nothing that Goldberg, a former Israeli soldier, called Obama "The first Jewish president" in 2012:

[Obama] is the most Jewish president we've ever had (except for Rutherford B. Hayes). No president, not even Bill Clinton, has traveled so widely in Jewish circles, been taught by so many Jewish law professors, and had so many Jewish mentors, colleagues, and friends, and advisers as Barack Obama.

Less dangerous, but equally false, is the notion that Obama does not enjoy the support of America's Jews. Seventy percent of us voted for Obama in 2012. His approval rating among Jews, according to the latest Gallup poll, is 54 percent — eight points higher than the national average — even after his bitter public feud with Israeli Prime Minister Benjamin Netanyahu. “Obama receives higher marks from Jews than most other religious groups for his handling of the nation’s policy toward Israel,” Pew found in 2013.

The argument that Obama does not care about Israel normally goes something like this: 1) Iran is an anti-Semitic state bent on Israel's demise; 2) Obama is willing to work closely with Iran on a nuclear accord; 3) Obama thus trusts anti-Semites, and must be acting to hurt Israel's security. Something close to this thought was hinted at by Morton A. Klein, president of the Zionist Organization of America, who told The New York Times last week that he knew Obama would be “the most hostile president to Israel, ever.” His evidence? For one, Obama’s 2009 speech in Cairo, in which he called for Muslims and Americans to treat each other with respect; but also (because of course) Rev. Jeremiah Wright.

Kristol’s rants in the National Review are, if anything, even more bizarre:

We have an angry president, increasingly desperate for vindication of his failed foreign policy, accelerating both his appeasement of Iran and his attacks on Israel …

… Why has Obama been lashing out? Because he had a dream. He was to be the American president who would preside at, and take credit for, the founding of a Palestinian state. Obama would be to Palestine what Harry Truman was to Israel. Now it's clear that's not going to happen during his presidency. Obama's frustrated that it's not going to happen. So he lashes out.

Put aside for a second whether you think it's tactically correct for Obama to work with the Iranians at this moment, or whether you think 5,000 is a worrisome number of centrifuges to exist in the country. What you’re left with is Kristol imagining the president’s emotional state based off of his “dreams” and tired comparisons to Neville Chamberlain.

The paranoia would be laughable if it wasn’t also so dangerous. Critics of Israel would likely tell you that this kind of fear-mongering is harmful because it undermines efforts to deescalate conflict in the region, and they'd be right. But those who staunchly back Israel should also worry about the over-the-top doomsday predictions for another key reason: They weaken Jews' ability to identify genuine anti-Israeli sentiment.

There's a well-documented, alarming rise of anti-Semitism in Europe. Violence against Jews has soared across the continent — in England, in France, in Belgium, in Denmark — west and east, north and south. It's easy to forget this in the U.S., where Jews enjoy uninterrupted privileges, but there are real and growing enemies to the Jewish people around the world. When Klein, Kristol, et. cry wolf over our yarmulke-wearing, Shabbat Shalom-singing, Haggadah-referencing president, they risk rendering meaningful defenses of Israel essentially meaningless.