Why the GOP primary debates will be an absolute disaster (again)

The Republican Party is trying hard to avoid another embarrassing primary season. Instead, they made things worse 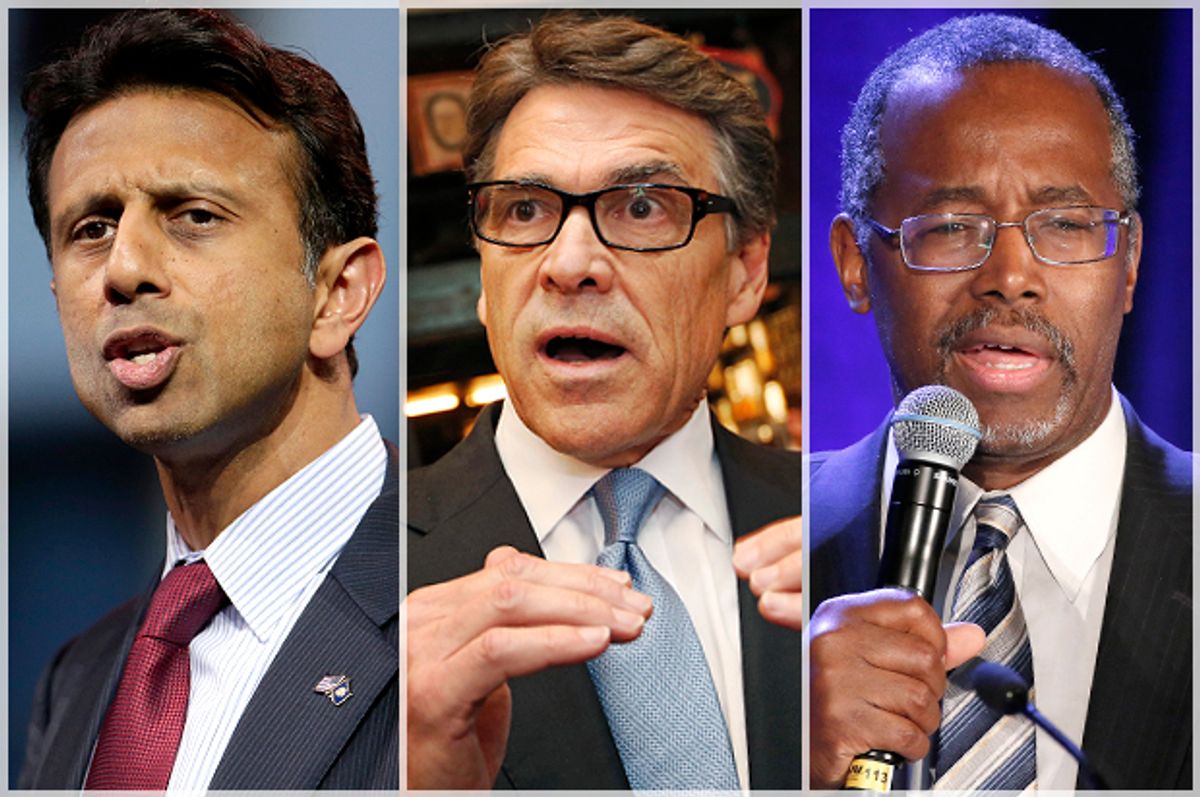 One of the most enjoyable presidential election seasons in memory had to have been 2012. It wasn't that the general election was very much fun. For Democrats, since there was no primary race at all, it was a predictable run to the finish line with only a slight bump toward the end when President Obama forgot to do his homework and whiffed one of the debates. But aside from a few epic Mitt Romney gaffes such as the infamous 47 percent comment, the general election provided very little for political junkies to sink their teeth into.

The Republican primary, however, was wildly entertaining. While it did feature the usual Republican presumptive front-runner anointed by the establishment because it was "his turn," the rest of the field was a bizarre collection of odd ducks and opportunists: Newt Gingrich. Michele Bachmann. Rick Santorum. Herman Cain. (And if you consider too those figures who merely flirted with throwing their hats in the ring, the race also includes Donald Trump, who pouted like 12 year old over his ignominious roast at the White House Correspondence Dinner and marched out of the campaign in a huff.) While common sense might have dictated that the fringe candidates would exit the race early and without note, it was actually the so-called normal, moderate candidates, like Tim Pawlenty and Jon Huntsman, who went down at the starting gate.

Tim Pawlenty had been that cycle's inevitable Midwestern "reformer," whom the political establishment always insists will be able to unite all the disparate factions of the GOP. This of course did not happen. Pawlenty spent a lot of early money trying to revamp his boring image and remake himself as a sexy GOP swashbuckler (as if that actually exists). Instead, he merely ended up making himself into a running joke, with his a string of bizarrely turgid videos and speeches, in which he inappropriately held forth, for example, about his "red hot smokin' wife."  He dropped out in August of 2011.

Former Utah Governor Jon Huntsman did make it through the early debates, but it was clear that he had made a strategic error of epic proportions. Huntsman had looked at the 2008 election and assumed that the country was moving away from the hardcore conservative politics of the past 30 years. He positioned himself as a thoughtful, bipartisan moderate -- even joining the Obama administration as Ambassador to China. Oops! In truth, Huntsman could not have been more wrong in his analysis of the party's mood. The GOP didn't just fail to moderate in 2012; it actually doubled down on its extremist agenda. And poor Jon Huntsman ended up looking as appetizing to primary voters as a Hostess Ding Dong filled with tuna tartar. He barely made a ripple before he was gone.

But the rest of the gang of weirdos and flakes hung in there for months, providing the nation with a peek into the ideological soul of the Republican Party in a round of historically entertaining presidential primary debates filled with legendary gaffes and missteps.

Even the frontrunner, Mitt Romney, wasn't immune to the insanity. Far from it. When asked during a debate in October 2011 about charges that he'd hired undocumented workers, Romney replied: “I’m running for office, for Pete’s sake! I can’t have illegals!” In another debate in December, he threw his proverbial silver spoon at Rick Perry's head, offering the former Texas governor a wager of $10,000 that he hadn't said something he was accused of saying. There was also the time when he insulted a voter's home-baked cookies by asking if they came from 7-Eleven. And that's not even to mention the infamous 47 percent remark, in which he wrote off half the country as a bunch of losers.

But Romney was George Washington compared to the carnival troupe that surrounded him. In my personal favorite of all the debates, Mitt didn't even participate. It was a "family forum" held in an evangelical Christian mega-church; for some odd reason it was moderated by the pollster Frank Luntz, who spoke in hushed tones and acted as if he were performing a sacred rite. Its most memorable moment happened before the proceedings even began, when Rep. Michele Bachmann, the only woman in the race, poured water for all the men who were arrayed around a big table on the stage, in what looked like the Last Supper. Luntz said: "I want to begin by thanking Rep. Bachmann for taking care of the water for today's event. To this, candidate Bachmann replied, "I'm used to it, Frank. I've poured a lot of water in my time."

In the early going, the breakout debater was businessman Herman Cain, who wowed everyone with his "9-9-9" plan. Nobody knew what it meant, but it was very entertaining watching Cain invoking the line over and over (and over and over) again. Ron Paul was likewise very popular in the debates. The country was a little bit startled to see a national figure actually endorse the idea of allowing people to die untreated if they got sick without health insurance; even more so to watch the GOP audience cheer such a misanthropic notion. But the candidate flame-out award has to go to then-Texas Gov. Rick Perry, who consistently seemed addled and, frankly, somewhat intoxicated. By November 2011, when he boldly said he would abolish three government agencies and then could only remember two of them, his goose was cooked.

While each of the aforementioned loons enjoyed their moments in the sun, there were two fringe candidates who fared especially well: Former House Speaker Newt Gingrich, for one, endured to the bitter end, often chiding the media for their "gotcha" questions and receiving in return thunderous rounds of applause. And people probably don't remember that the sweater-clad ex-senator (and national joke) Rick Santorum actually won the Iowa caucuses, and came in second in the primaries overall.

But perhaps the biggest star to come out of the debates was the Republican base. Audiences at debates throughout the primary season proudly let their freak flags fly. Their most memorable moment -- aside from cheering the deaths of people without health insurance -- was their booing of a soldier who identified as gay and asked if the candidates would reinstate the "Don't Ask Don't Tell" policy if elected. Not one of those candidates spoke up for the soldier and not one spoke out against the booing. Profiles in courage, the lot of 'em.

As the first post-Citizens United campaign -- with any oddball billionaire able to bankroll any oddball candidate, much longer than they'd ever have been able to in previous elections -- the whole thing dragged on for months. It was, all in all, an amazing spectacle, and one that showed us more about the Republican Party than we probably wanted to know. It was certainly more than a Republican strategist would want want the country to see. Each inane utterance sank the party's national prospects ever more deeply into the mud.

So the GOP decided to take action this cycle by spacing out the debates and holding fewer of them than in 2012. Last week, the party announced that it will limit the number of candidates who can participate to the top 10 in the polls. In this year's massive field of presidential wannabes, this is not sitting particularly well with many presumptive candidates. And you can't blame them, considering who would -- and, more importantly, would not -- make the cut:

“It’s the [Donald] Trump problem,” said Florida GOP strategist Rick Wilson. “He’s an entirely un-serious candidate but one with very serious name ID.” Trump, who hasn’t actually announced and has a long history of pretending he’s going to run for president, might make the debate stage under current rules simply because his notoriety affords him a level of name recognition that many candidates can’t come close to. According to the criteria released by Fox News, which will host the Aug. 6 debate, the 10 candidates who make the stage will be determined by an average of five recent national polls — and when Trump’s name is tested, his performance suggests he’d be one of the 10.

The national polling threshold also gives an edge to Mike Huckabee, the former Arkansas governor who’s spent the past several years hosting his own Fox show, and Ben Carson, the former neurosurgeon who’s become a darling of grass-roots conservatives in part because of his frequent appearances on the network. Huckabee, who’s been out of office for eight years, and Carson currently rank sixth and seventh in the national polls, respectively, and thus would qualify for the first debate if it were held today. But announced and prospective candidates such as Ohio Gov. John Kasich, South Carolina Sen. Lindsey Graham, Louisiana Gov. Bobby Jindal and Fiorina — the only woman in the field — would not meet the threshold.

If the point was to subdue the freak show, it's not clear this new rule is going to accomplish what the party wanted it to. Indeed, what they seem to have done is combine the new propensity of eccentric billionaires to meddle in the nominating process with the celebrity conferred by the right-wing media machine. In this era of big-money politics, the old concept of going to Iowa and New Hampshire and glad-handing every single voter to jump start a national campaign is giving way to something new:

“We live in a society that values celebrity, and our nominee is going to have to go up against Hillary Clinton, who’s got a million percent name ID,” [GOP strategist] Rick Wilson said. “And, in reality, all of these campaigns are working to build the same thing. Your political operation now is a start-up operation that lasts for a year and half, and that’s your time to build a celebrity.

As a political junkie, the prospect of another GOP primary season like 2012 is exciting. As a citizen, however, the institutionalization of the "American Idol" process of presidential politics is more troubling. This season, none of the Republican contestants seem likely to have the requisite "X Factor" or raw talent it will take to win that contest. But you never know. And if celebrity is the most important political currency, it's only a matter of time before the billionaires find one they can mold to their specifications. After all, the most revered right-wing politician in American history was a product of Hollywood's fame factory and General Electric, Ronald Reagan. This does not seem like a good model for the long term.