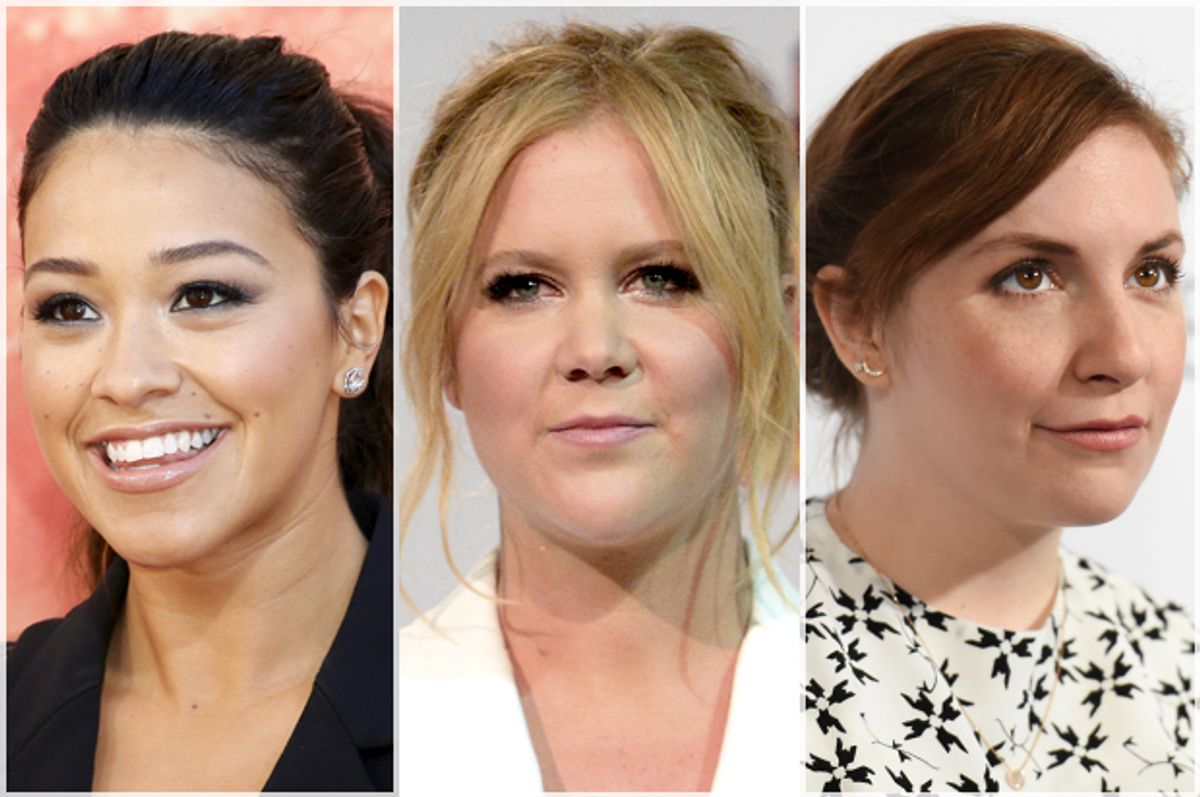 For their latest roundtable, The Hollywood Reporter gathered together six of the most badass funny-women in TV — Amy Schumer (“Inside Amy Schumer"), Tracee Ellis Ross (“Black-Ish”) Kate McKinnon (“SNL”), Gina Rodriguez ("Jane the Virgin"), Lena Dunham (“Girls”), and Ellie Kemper (“Unbreakable Kimmy Schmidt”) — for a smart, funny and candid conversation about being a woman in the industry, from grappling with sexism and racism to wearing a vagina “patch” during sex scenes. The whole piece is a slam-dunk, and we highly recommend you read the whole thing, but here’s a little palette cleanser:

On why women are so absent from late night:

Talking about why there is such an absence of women on late night, Dunham suggested that networks were afraid to take risks. “The idea of risk-taking is terrifying,” said Dunham. “I love Stephen Colbert, he's a genius, but CBS [couldn't] take the David Letterman slot and hire somebody who represented even an ounce of diversity? Also, when they got James Corden — another guy I love — there was this joke, "We've run out of white men here, we have to import them from England." There is no shortage of established women who've been on the comedy circuit for years. It bums me out that someone like Kathy Griffin was relegated to Fashion Police.”

As to why higher-ups haven’t responded to the public outcry, Schumer responded: “I think people hate women. I don't think they want to hear a woman talk for too long. A lot of people project their mom yelling at them. My [career] has been about tricking people into listening. I'm not saying all men hate women, but there's such an aggression.”

On typecasting and being a woman of color in Hollywood:

Rodriguez and Ross spoke about the difficulties of being women of color in Hollywood, and the scarcity of meaningful roles on offer. “There aren't many [roles in film]. That's why I say no to all the offers!" said Ross. "Working on a film is one job where you look at a casting breakdown and I'll think, That's me! But she's not supposed to be black…But I go for them anyway.”

“I remove myself instantly if something's perpetuating a stereotype," added Rodriguez. "But the only way to stop stereotypes is to say, 'I'm going to wait for a journey that suits me.'"

Dunham acknowledged that she herself had blind spots while she was shooting “Girls." “There was a lot of dialogue about race when 'Girls' started,” she said. “I'd been thinking so much about representing weirdo, chubby girls and strange half-Jews that I had forgotten that there was an entire world of women being underserved.”

On the importance of self-deprecation in comedy:

Discussing her "12 Angry Men" sketch -- which Dunham called "the most important thing that's happened on TV in a long time" -- Schumer spoke to the importance of self-deprecation as a way of taking control of the narrative. “It’s very important to me," she said. "I heard this heated debate once between two male comic friends of mine about whether [actress] Michelle Williams was hot. One was like, 'I don't think I'd have sex with her.' I'm looking at them, both in their 40s …Gargoyles. (Laughter.) Actually, gargoyles are interesting to look at. And I'm like, 'You guys would both die to f— her.' Then I watched [SNL's] Cecily Strong host the White House Correspondents' Dinner. She did a great job. Then right away, the cable news anchors are deliberating whether she was funny. Um, are you guys comedy experts? People love burning somebody at the stake. So I just burn myself first!"

On Hollywood’s preoccupation with women’s bodies:

Naturally, there were plenty of stories about the ridiculous beauty standards imposed on women in the entertainment industry. "I was up for a role and auditioned in character. They're like: 'We love her. But can she come back in with a tight black dress?'" explains Rodriguez. "I said, 'That doesn't make any sense for the character.' They were like, 'We need to know if you're pretty enough to be on the cover of a magazine.'”

Ross recalled being called in for a network show to play a Harvard lawyer. "I wore a skirt suit and heels. Seemed appropriate. Then there were many discussions about my hair. They'd printed up all these pictures of me from 15 f—in' years ago and had me in and out of the bathroom trying on clothes. They finally pick a skirt — the shortest I brought. Then got a T-shirt from one of the people in the office. The woman says, "Hmmm, your boobs." I was like, "I didn't bring a bra for this T-shirt." She screams down the hall, "Who wears a 34B?" I put on someone else's bra, a size too small, and somehow auditioned. I remember wondering, "What did I just allow myself to do?" The other actress [who auditioned] was dressed like she was going to a club and got the role. It was one of those moments where you're so confused and humiliated. But that's part of the biz."

There was a general consensus that women need to learn not to compromise or apologize in the face of institutionalized misogyny. “I was raised by a woman [singer Diana Ross] who has high standards for what she's worth, which has been called "diva behavior." I have witnessed flagrant, disgusting behavior, and that is not my mother. There is a way to be a woman, ask for what we deserve and be able to negotiate," said Ross.

"I once heard an exec say, 'If you don't ask for it, we can't give it to you,'" added Kemper. "We can't go through our lives just being grateful for everything.”

It ended on this magical exchange:

DUNHAM: I want women to have all the things.

ROSS: And to think we started this conversation talking about penis bags.

MCKINNON: It was pretty awesome.

SCHUMER: Let's never apologize for anything.