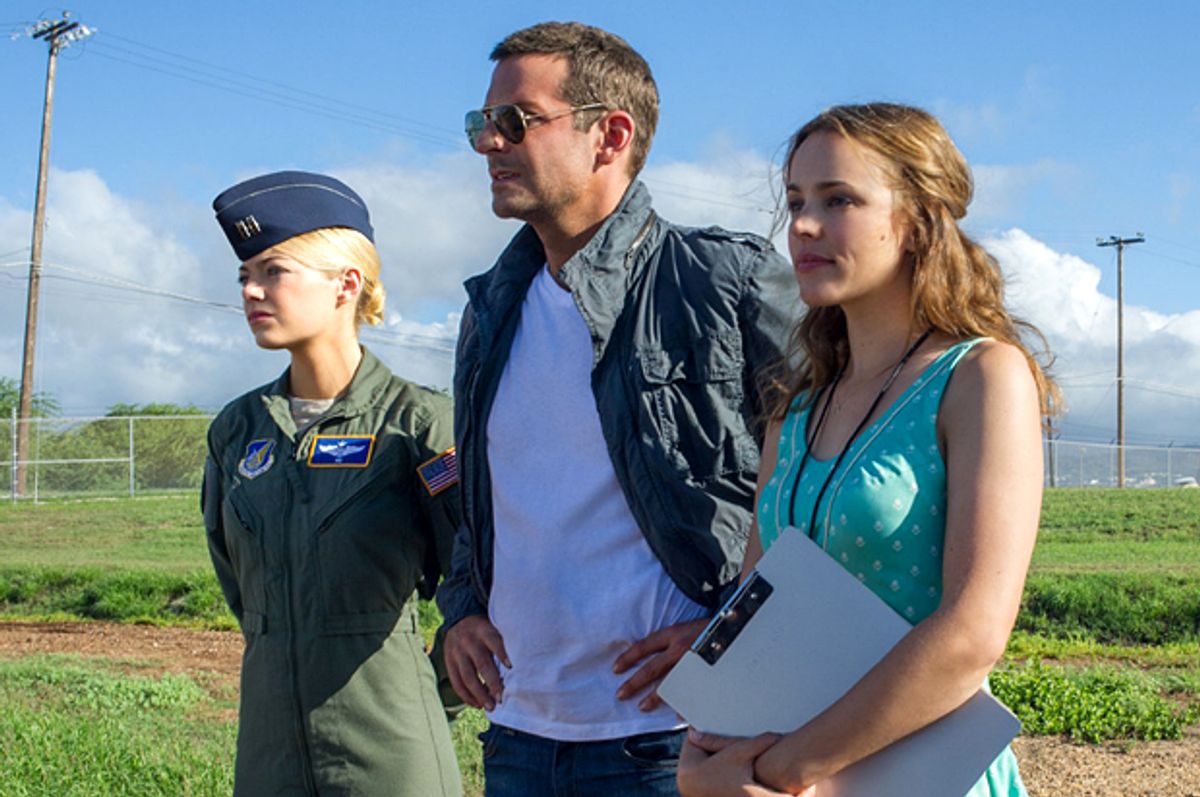 Cameron Crowe’s new Hawaii-set rom-com “Aloha” doesn't open until this weekend, but it is already garnering criticisms for its depiction of Hawaii, with an Asian American watchdog group lambasting the film for the lack of Native Hawaiians in the cast.

The film stars Bradley Cooper as a military contractor sent to Hawaii, where he becomes torn between two women -- an Air Force pilot (Emma Stone) and his ex (Rachel McAdams) -- and meets a bunch of other white people on the way (Alec Baldwin, Danny McBride, Bill Murray, John Krasinski, etc). While we haven't seen the film yet, it isn't hard to believe the criticisms, given Hollywood's widespread habit of co-opting Hawaii as as an “exotic” setting for white people to find and reinvent themselves.

“Caucasians only make up 30% of the population [of Hawaii], but from watching this film, you’d think they made up 99%,” said the Media Action Network for Asian Americans. “This comes in a long line of films - 'The Descendants,' '50 First Dates,' 'Blue Crush,' 'Pearl Harbor' - that uses Hawaii for its exotic backdrop but goes out of its way to exclude the very people who live there. It’s an insult to the diverse culture and fabric of Hawaii.”

Native Hawaiians have also taken offense with the film's name. “If you have a romantic comedy about the military in Hawaii... but a title that says ‘Aloha,’ I can only guess that they’ll bastardize the word,” Walter Ritte, a Native Hawaiian activist, told the AP. “They’re taking our sacred word... and they’re going to make a lot of money off of it.”

In response, Sony has released a statement defending the film. “While some have been quick to judge a movie they haven’t seen and a script they haven’t read, the film Aloha respectfully showcases the spirit and culture of the Hawaiian people," the statement reads. "Filmmaker Cameron Crowe spent years researching this project and many months on location in Hawaii, cultivating relationships with leading local voices. He earned the trust of many Hawaiian community leaders, including Dennis ‘Bumpy’ Kanahele, who plays a key role in the film.” Sony also released a featurette where Crowe and Kanahele discuss the meaning of the word "Aloha."

This is just the newest incident in a long string of bad press for "Aloha," which, in addition to being subject to years of rewrites and cast overhauls, was also responsible for perhaps the most profound stanza of Amy Pascal poetry from the Sony Leaks. To quote:

“The satellite makes no sense
The gate makes no sense
I’m never starting a movie again when the script is ridiculous
And we al know it
I don’t care how much I love the director and the actors
It never
Not even once
ever works."