From the Duggars to Honey Boo Boo: How TLC became the most controversial channel on television 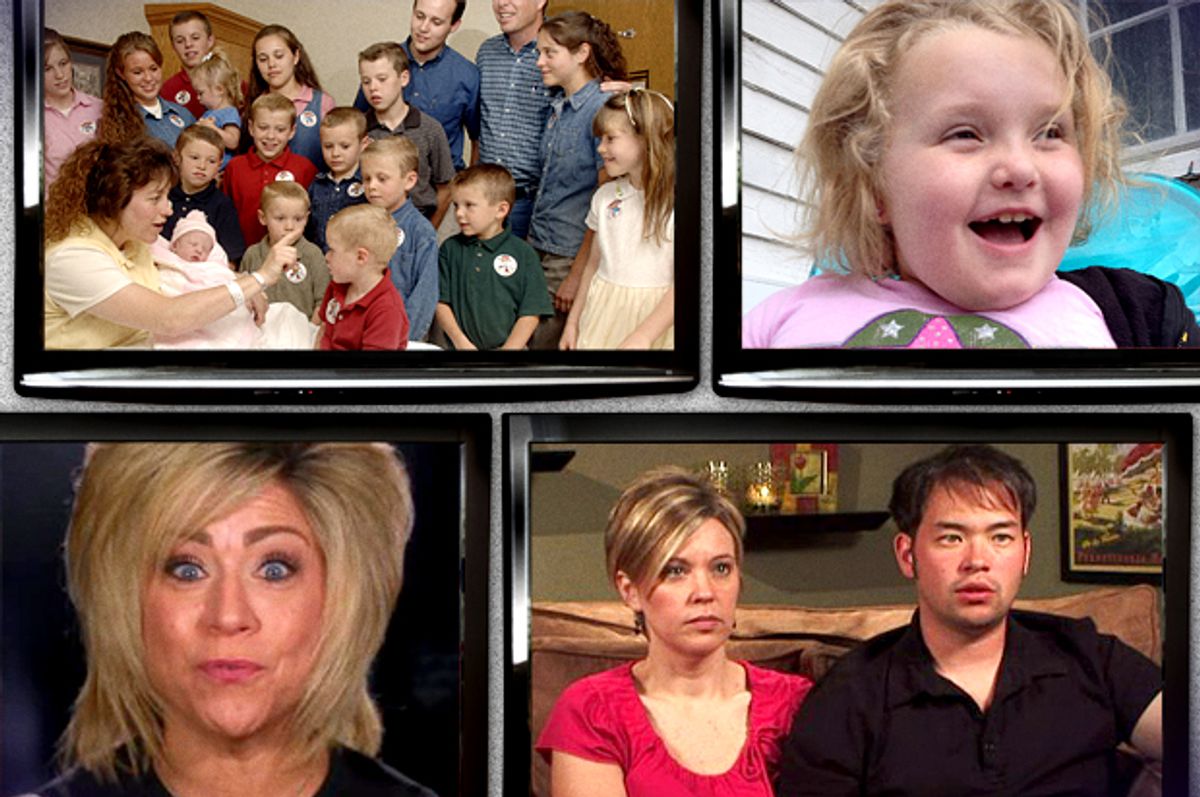 This post was originally published in January 2015. It has been updated and republished in light of the sexual abuse allegations against Josh Duggar.

Recently, it was revealed that Josh Duggar -- oldest son of the conservative Duggar clan, made famous on TLC's "19 Kids and Counting" -- molested a number of underage girls, including his younger sisters, when he was a teenager. TLC responded by pulling the show from its schedule, but not before airing a Thursday night marathon of the show -- just one of many missteps in the way the frequently-embattled network has handled the incident. While it may be the most devastating scandal to hit one of TLC's subjects, it's far from the only one; Crisis management has become an everyday occurrence for a network whose creative approach has generally been to concoct the most outlandish and dehumanizing depictions of human nature it can muster, throw them at the wall of public outrage and see what sticks.

Believe it or not, TLC wasn’t always a bastion of controversy. Once upon a time there was a nice, boring network called "The Learning Channel" which focused mainly on science, history, nature and adult educational content. After rebranding as TLC in 1998, we saw an incremental shift towards reality shows with more popular appeal, which is when everyone became very obsessed with renovating and we started to see shows like “Trading Spaces,” “Junkyard Wars,” and “A Wedding Story.” The biggest change came in 2008, when TLC rebranded itself with a new slogan “Life surprises” and a renewed focus on eclectic human stories instead of decorating and home improvement shows that had dominated the network a decade prior. Thus came the family-focused, individual-centric shows like "Jon & Kate Plus 8," "Little People, Big World" and "17 Kids and Counting," from which the slow crawl into absurdity began. Here's a look at some of the most controversial moments TLC has weathered over the past few years:

"Jon and Kate Plus 8" and "Kate Plus 8" (2007-2015)
Part of the early vanguard of shows chronicling large, unusual families, “Jon & Kate Plus 8” eventually became “Kate Plus 8” after the couple’s ugly and public divorce. Things have been unpleasant ever since: A controversial 2012 book penned by Robert Hoffman, a friend of Jon Gosselin’s, called “Kate Gosselin: How She Fooled The World” alleged that Kate abused her children and that he had reported her to child protective services on numerous occasions (the claims couldn’t be verified and the book was quickly pulled from Amazon). In interviews over the years, Jon Gosselin has repeatedly accused Kate of exploitation and using the children as props to fuel her desire for wealth and fame.

"19 Kids and Counting" (previously "17" and "18 Kids and Counting") (2008-2014)
TLC may not be the Learning Channel anymore, but that doesn't mean it can't help you hone your math skills: For example, you take Jon and Kate, plus 8, plus another 11, and you get the prolifically procreating Duggar family, who have long come under fire for their child-rearing practices and their staunch conservative Christian views. The Duggars have a long history of anti-LGBT sentiments both on and off the show and have repeatedly made comparisons between abortion and the Holocaust. Last week, news broke that Josh Duggar molested a number of underage girls when he was a teenager, a horrific incident that many pundits see as part and parcel with the Duggar family's repressive conservative views; As our own Jenny Kutner opines, the Duggars' beliefs "created an environment that fostered child sex abuse."

"Toddlers & Tiaras" (2009-2013)
Many criticized the child-beauty pageant show for its overly sexualized depictions of children (the time they dressed a 3-year-old up as Julia Roberts’ character in “Pretty Woman” was a high watermark) and for the all-round terrible parenting on display, an accusation that TLC has been no stranger to over the years.

"Here Comes Honey Boo Boo" (2012-2014)
The "Toddlers" spinoff about precocious pageant kid Alana “Honey Boo Boo” Thompson and her mother “Mama June” was criticized as cruel, vulgar and exploitative from the get-go, with accusations about bad parenting and poor morals levied alongside the argument that TLC was propagating negative hillbilly stereotypes. Yet people couldn’t get enough – the show was a smash hit, with 2013’s wedding episode garnered 3.2 million viewers, the show’s biggest audience ever. A few months ago, the show was canceled when it was revealed that Honey Boo Boo’s mother was in a relationship with a convicted child molester who abused her own daughter, Anna Marie "Chickadee" Cardwell.

"Long Island Medium" (2011-2014)
Long Island medium Theresa Caputo’s claims she can communicate with spirits have been debunked and scrutinized everywhere from “Wired” to “Inside Edition.” In 2014, private investigator Ron Tebo publicly accused Caputo of fraud, alleging that she uses information from advance-interviews with subjects to pretend that she is reading minds and calling her “a vulture preying on the most vulnerable.” Even Anderson Cooper didn't buy it.

"Sister Wives" (2010-2014)
Polygamist Kody Brown said he wanted to air the show about his polygamist family to combat societal prejudices polygamists face. The instantly-controversial show actually ended up breaking down some legal hurdles as well – in August, the Brown's concluded their ongoing legal battle, prompted by the show, as a Utah judge struck down a part of the state’s anti-polygamy law.

"All-American Muslim" (2011)
Canceled after one season due to low ratings, the show, which followed five Lebanese-American muslims living in Dearborn Michigan, received mostly positive feedback for its sensitive, nuanced portrayal of its subjects. Unfortunately, it still became a lightning rod for controversy when Lowe’s and other companies withdrew their sponsorship of the show and refused to back down, even after a host of celebrities, Muslim-American and Arab-American activists and politicians criticized the home-improvement chain for its discriminatory behavior. After the show’s cancellation, James Poniewozik pondered its demise in a Time article, asking “Was All-American Muslim Too Controversial, Too Boring, or Too Good to Survive?”

"My Big Fat American Gypsy Wedding" (2012-2014)
A lot of issues with this one. In TNR, Seyward Darby decried the show, which documents elaborate weddings in the Roma community, for its “voyeuristic, stereotypical, judgmental, and shallow depiction of one of the world’s most misunderstood and, at times, abused minorities...Viewers are instead offered an overly simplistic view of the cultures of Travellers and Roma—two distinct groups, though the show happily conflates them into one category—with scarcely any historical or political context about their place in the United Kingdom and Europe more broadly.”

"Breaking Amish" (2012)
Part of reality programming’s booming “Amishxploitation” genre (see "Amish Mafia," "Amish Renogades," et al), the show centered on five young Amish and Mennonite students who moved to New York to experience modern life "for the first time." Along with the broader argument that the show was exploiting its participants and reducing an entire culture to stereotypes, the show was thrust into controversy when it came out that the show’s subjects were basically nothing more than paid actors: Many of the cast hadn’t been Amish for years or were already married.

"My Husband's Not Gay" (2015)
In January, GLAAD spoke out against TLC’s newest televised provocation “My Husband’s Not Gay,” a reality show which focuses on four heterosexually-married Mormon men who don’t identify as gay, despite admitting they have feelings for men. GLAAD President and CEO Sarah Kate Ellis called the show “downright irresponsible,” saying that "by investing in this dangerous programming, TLC is putting countless young LGBT people in harm's way." A Change.org petition to cancel the show has garnered more than 130,000 signatures.