Obamacare's doomsday scenario: How the GOP really could kill it this time

If SCOTUS strikes down subsidies, the GOP has leverage. Will House Republicans know how to use it? 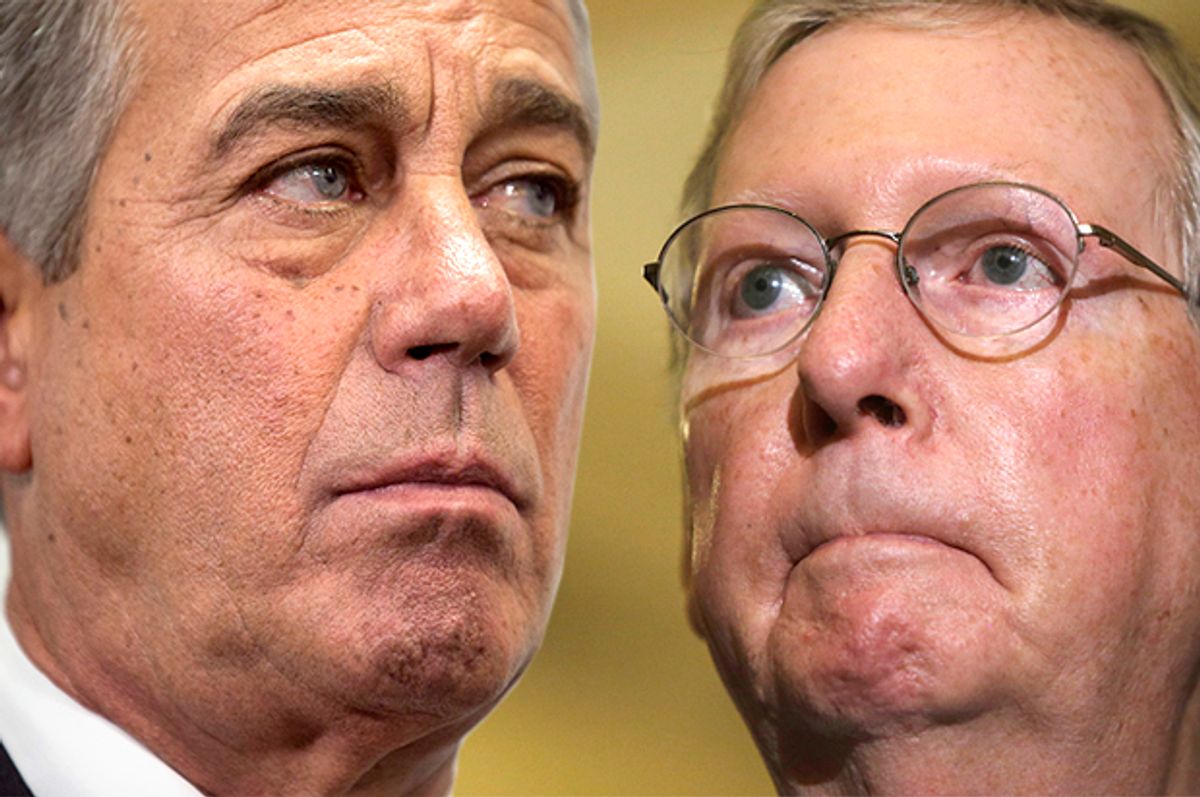 The Senate GOP does have a plan to "fix" the Affordable Care Act if the Supreme Court rules in favor of the plaintiffs in King v. Burwell. Would you be surprised to hear that it is a 100% political maneuver, and not backed by sound policy?

Republican senators, Politico reports, are "coalescing" around a proposal put forward by endangered Wisconsin Sen. Ron Johnson. It would temporarily extend the subsidies for plans purchased on federally facilitated exchanges if the Supreme Court invalidates them in its King decision. This would come at a big price: it "would also repeal Obamacare’s individual and employer mandates and insurance coverage requirements." Johnson's bill would essentially restore one core component of the Affordable Care Act while eliminating the others. It would upend the mechanisms for universality on which the economics of the law hinge, and it would weaken the quality of coverage available. And since the subsidies would only be extended until 2017, that gives Republicans another opportunity in two years: either to repeal the law entirely, if there's a Republican president, or to extract more concessions, if the president is a Democrat.

But look at us being so whiny, trying to explain their obvious and cynical political strategy. Did we forget to take our chill pill this morning? It must be so. Because all Ron Johnson is trying to do with this bill is restore "a little bit of freedom" to the balance of the universe.

“In that moment of what could be political chaos, we’re offering such a reasonable proposal that solves a mess,” Johnson said. “It fixes a mess caused by a sloppily written law, unlawfully implemented. All we’re asking for is a little bit of freedom back, which would be, I think, pretty popular,” Johnson said. Even Majority Leader Mitch McConnell (R-Ky.) is backing Johnson’s measure, along with the rest of the chamber’s GOP leaders.

Senate Republicans have their plan to box in Democrats, and it has some bite. The wild card here, as usual, is the House Republican conference.

Remember those hotheads? They haven't gone anywhere. And while some senior House Republicans are working on their own ACA "fixes" in the event of a favorable SCOTUS ruling, rank-and-file conservatives are muttering unenthusiastically about the Senate plan. Even though Johnson's bill would lop off several legs of the Obamacare stool, it would still leave one of them. That's too much for some conservatives. "If you’re voting for an extension," Rep. Bill Flores, chair of the Republican Study Committee, tells Politico,"you’re essentially voting for the continuation of Obamacare -- that’s a real problem." And then there is Rep. Matt Salmon, who is just making noises: "When asked about Johnson’s bill, Rep. Matt Salmon (R-Ariz.) gave a thumbs-down and, imitating a game-show buzzer, said only 'Eerrrrrrntt!'"

"Real Conservatives" don't want to vote to extend any part of the Affordable Care Act, for any price, for any length of time. It could get them primaried and, in terms of end-game strategy, removing certain unpopular provisions from the law could erode coalitional support for wholesale repeal down the road.

The question here is what sort of tactical position these House Republicans are occupying. History would suggest that they're not consciously occupying any tactical position, because they do not understand tactics. In this case they would once again be their own enemy. If the Supreme Court sides with the plaintiffs in King, and they really refuse to extend any part of the Affordable Care Act, then House and Senate Republicans will engage in another intra-party war where they can't agree on anything will court much of the anger from people who lose their subsidies.

But there's another more dangerous scenario for Democrats. House Republicans hold out on any concessions whatsoever for a long time, and then they "fold" and agree to the Senate Republicans' plan. This would position Johnson's bill publicly as the supposed "reasonable compromise." And of course it's not that at all. It's a direct plan to render the Affordable Care Act ultimately inoperable.

Don't kid yourself: If the Supreme Court takes out the subsidies in King, there's no guarantee that this will "backfire" on Republicans. It will be very bad news for the millions of beneficiaries of the law. Obamacare supporters are going to need a major assist in the form of congressional Republican incompetence if they want to salvage the core structure of health care reform. We all know that's possible, but it's hardly something to bank on.