The Himalayan region is particularly susceptible to climate change, a new study finds 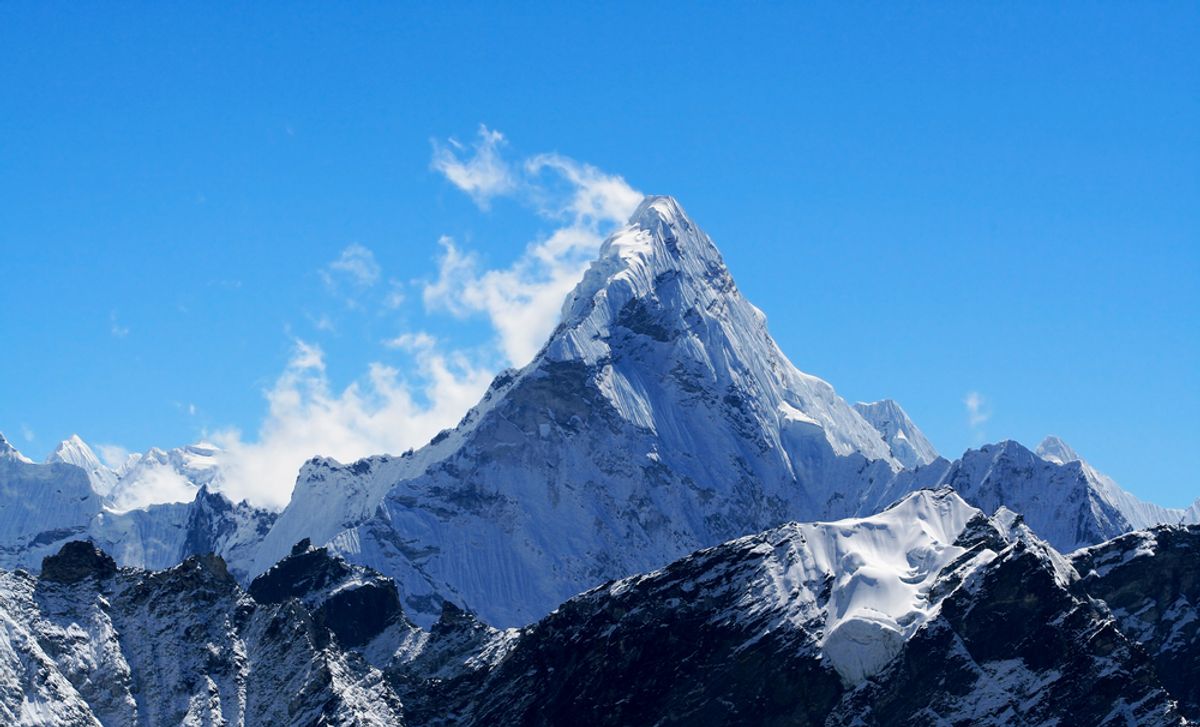 Mt. Ama Dablam in the Everest Region of the Himalayas, Nepal. (Pal Teravagimov/Shutterstock)
--

Take a long, last look at the iconic glaciers in the Mt. Everest region of the Himalayas, the area with the highest volume of ice outside the north and south poles. They're incredibly sensitive to the impacts of a warming planet, a new model from a team of international researchers finds, and they're set to all but disappear by the end of the century.

The study, published in the journal The Cryosphere, carries either bad news or very bad news for the region. It predicts that by the year 2100, glacier volume will decrease by anywhere from 70 to 99 percent. Just how bad it gets -- the difference between losing most, or virtually all, of the ice -- depends on how much we're able to limit our emissions of greenhouse gases, and the changes in temperature, snowfall and rainfall that result from manmade global warming.

And even though climate change could actually increase precipitation in the region, said Joseph Shea, a glacier hydrologist at the International Centre for Integrated Mountain Development in Nepal and the study's lead author, in a statement, it won't be enough to offset the dramatic impact of warming. “The signal of future glacier change in the region is clear: continued and possibly accelerated mass loss from glaciers is likely given the projected increase in temperatures,” he said.

The region is already feeling the heat: between 1961 and 2007, the study found, ice volume has decreased by 16 percent, and total glacial cover by 20 percent. In an accompanying blog post, Shea elaborated on the feedback loop that would likely cause the glaciers to melt even more rapidly with future warming:

Glaciers gain mass in the form of snow (accumulation), and lose mass mainly through melt (ablation). The annual sum of mass gained and mass lost is the 'net balance'. It’s a bit like a bank account: you gain money and spend money over the course of a year. At the end of the year, if you've earned more than you spent you'll have a positive balance. Glaciers can be treated the same way, with annual field visits (or multi-annual remote sensing studies) used to check the income, expenditures, and account balance.

...The increase in temperatures has two main effects on glaciers: first, it increases the amount of melt that occurs. Second, it raises the elevation of the freezing level, which has two secondary effects: the area exposed to melt will increase, and the amount of snow accumulation will decrease. To extend the tortured bank account analogy further, future warming will not only withdraw more money from your account, but it will also represent a cut in your income.

"No matter which scenario or model type was used," Shea wrote, "the results were clear: glaciers in the Everest region could see sustained mass loss through the 21st century." Even in a low emissions scenario, the projected impact is striking:

The researchers are careful to emphasize that this is a model, not a forecast for the future. “Our estimates need to be taken very cautiously," said glaciologist and study coauthor Patrick Wagnon, "as considerable uncertainties remain.”

Still, the authors stress that “the signal of future glacier change in the region is clear and compelling” -- and the loss of glaciers, added Shea, "would be a pretty big deal." They are, after all, iconic, and attract large numbers of tourists and climbers. Beyond even that, they're an important source of water to local populations; while increased melt might temporarily increase streamflow, in the longterm the region would likely see less water, particularly during the dry season before the monsoons, with potential impacts on agriculture and the generation of hydroelectric power. And, in a worst case scenario, the retreating glaciers may lead to the formation of lakes of meltwater held back by dams -- ready to be dislodged at the trigger of an avalanche or earthquake and cause devastating floods below.