The pointless "Point Break" remake: Why the earnest reboot treatment will fail this cult classic

"Utah, get me two!" is a sandwich order, not a request for a second edition of this weird surfer-heist flick 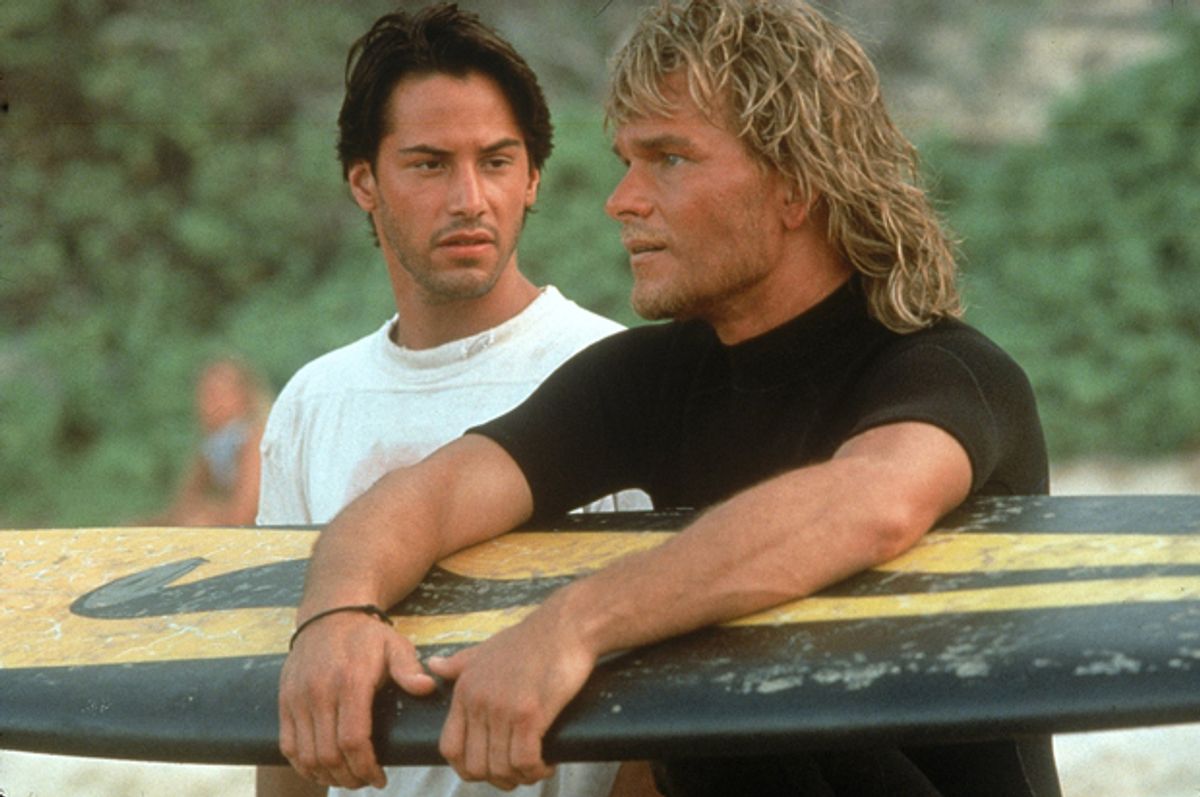 Some movies leave you scratching your head over just how the pitch meeting that gave birth to it might have gone. “Point Break,” the 1991 sorta-surfing, sorta-bank heist, sorta-Buddhist movie in which Keanu Reeves sharpened (or flattened) his now-patented affectless delivery is one of these. We’ve always assumed that the two-hour-plus movie was made up of loose ends from other films – the surfing movie they’d not quite been able to get off the ground, crossed with the sorta clever Ex-Presidents idea someone’s brother had come up with, jammed into an attempt to find something for Patrick Swayze (who plays the Zen-deep surfing guru who calls himself Bodhi) to do that might be as big as “Dirty Dancing.”

Somehow it worked, sort of. The film, as unconvincing as it was, went on to make money, get mixed-to-decent reviews -- Time’s Richard Corliss called it “a stunningly made film whose plot buys so blithely into macho mysticism” – and to inspire the theatrical parody “Point Break Live!”, in which the Keanu character becomes a kind of living, cue-card reading prop. But it was still a mess.

The fact that the film’s director, Kathryn Bigelow ended up becoming a major filmmaker – someone, at the very least, who excels are sketching chemistry between her characters – makes the whole thing even more baffling. It makes you wonder if the future “Hurt Locker” director was putting us on, laughing over the script she worker from the whole time she made it.

We never thought we’d pine for the low-key cool and narrative coherence of this strange artifact from the George H. W. Bush era, but it’s hard not to be nostalgic for its amiable goofiness when you see the trailer for the new, clench-jawed, Ericson Core-directed “Point Break,” which opens on Christmas day.

Let’s put aside our usual complaint that countless scripts and story ideas – and they can’t all be bad, can they? – are floating around Hollywood all the time, and that every sequel, remake and reboot shuts the door on one more of those. And that if we were pondering promising remakes, we’re not sure this one would be at the top of the list. We’ve just seen the trailer so far – maybe the full movie will be so good we’ll be talking about its impact the way people are talking about the new “Mad Max” film now.

But, probably not. The new trailer’s defining quality is its sheer over-the-top, dead-earnest, extreme-sports blowout. Of course, the original had its share of action scenes, but how many of us remember the high-tech effects? We mostly think of the surfing footage (which are mostly handsome and naturalistic), the fight on the beach with the surfer gang, Bodhi’s spiritual BS, Keanu blankness, and so on. The new movie seems to be all about skydiving, heavy explosives, submachine-gun firing, window-smashing, and “extreme athletes… using their skills to disrupt international financial markets.” (We’ll leave aside, too, the fact that some people who really did use their skills to disrupt financial markets have not yet been captured very well by Hollywood.)

Film critic David Denby wrote in his recent book, “Do the Movies Have a Future,” about how increasingly, “characters get shoved off the set by special effects”; that seems to be literally true in the upcoming “Point Break.” (For what it’s worth, the new Bodhi, Édgar Ramírez, was quite good as the Venezuelan terrorist in “Carlos”; the Aussie Luke Bracey plays Keanu’s old role, Johnny Utah.)

At the very least, we think a theatrical parody of this one will be a lot harder to put together. Now that we think of it, though, maybe not that hard.