From Tom Hardy to Mark Ruffalo, male celebrities are increasingly speaking out about gender bias in their industry 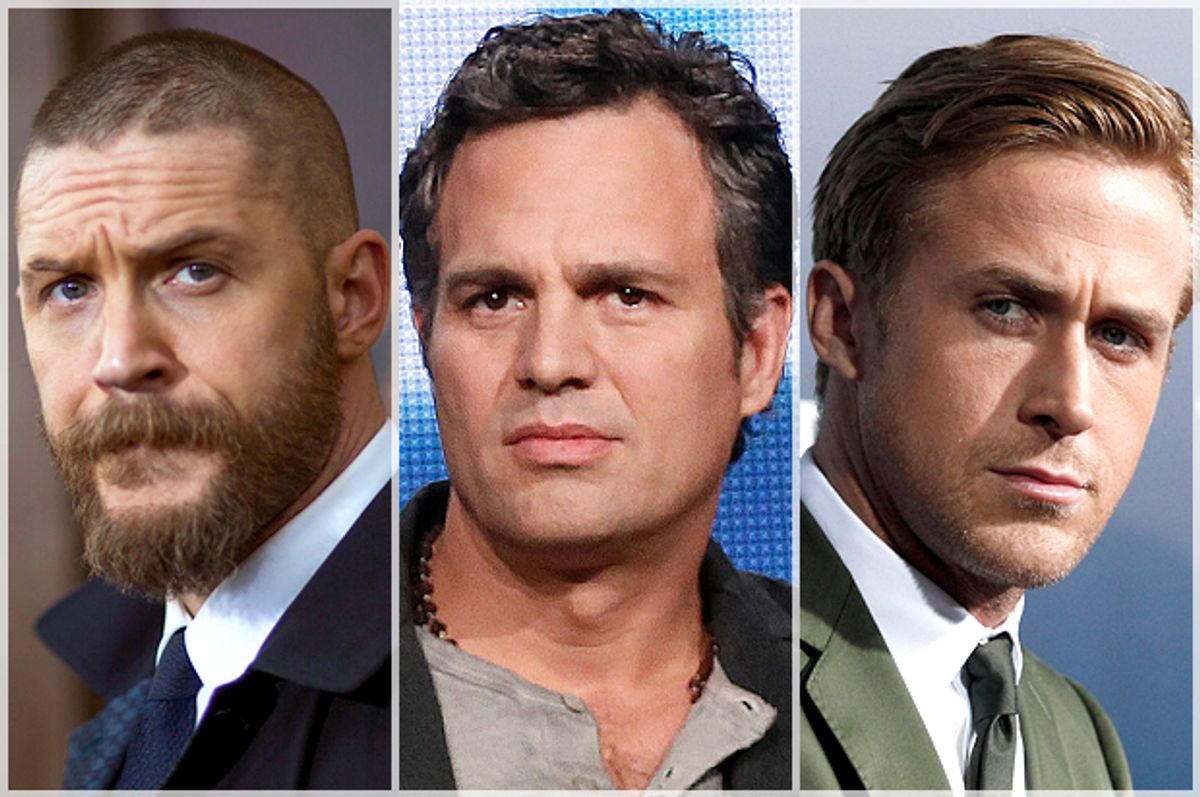 Recently, Melissa McCarthy revealed that she called out a sexist reporter who called her “hideous” during the press tour for her 2014 film “Tammy.” Galvanized by McCarthy’s remarks -- and the many other awesome Hollywood women who have recently out against industry gender biases -- we rounded up a list of other female celebrities who shut down sexist reporters, from Lena Dunham defending "Girls" nudity to Scarlett Johansson calling out a reporter for giving her “rabbit food” questions. Now, in the interest of equality (!), we've decided to also round up some Hollywood men who have taken advantage of their press tours to shine a light on the issue of Hollywood sexism. Alas, they may be few in number, but they are mighty.

Most recently, Toronto Star writer Peter Howell asked "Mad Max" star Tom Hardy whether he had any issues with having so many women in a “man’s movie.” Hardy quickly responded “no, not for one minute. I mean, that’s kind of obvious." Although frankly, it’s not about what he said so much as how he said it — and the world-historical look of bemusement that crossed over his face as he answered it. We feel you, Tom.

After Gosling and Michelle Williams’ film “Blue Valentine” got an NC-17 rating because of a scene where Gosling’s character goes down on Williams’ character, Gosling spoke out about the double standard involved in this act of censorship. As he said in a statement:

"You have to question a cinematic culture which preaches artistic expression, and yet would support a decision that is clearly a product of a patriarchy-dominant society, which tries to control how women are depicted on screen... The MPAA is okay supporting scenes that portray women in scenarios of sexual torture and violence for entertainment purposes, but they are trying to force us to look away from a scene that shows a woman in a sexual scenario, which is both complicit and complex. It's misogynistic in nature to try and control a woman's sexual presentation of self. I consider this an issue that is bigger than this film."

Promoting his movie "Don Jon" on the "Ellen" show, proud feminist Joseph Gordon-Levitt spoke out about the film's underlying feminist sensibilities. As he put it:

"My mom brought me up to be a feminist. She would always point out to my brother and me that our culture does often portray women like objects... She wanted me and my brother to be aware of it because we see these images on TV, in the movies and on magazines all the time. And if you don't stop and think about it, it just sort of seeps into your brain and that becomes the way you perceive reality."

When the press asked him about the experience of becoming a sex symbol after "Harry Potter," Radcliffe was quick to point to double standards in the industry, saying: “Well, the male population has had no problem sexualizing Emma Watson immediately.”

Radcliffe has often spoken out about being a feminist; In an interview with Stylist magazine, he spoke about the importance of developing strong female roles:

"On more than one film I’ve persuaded people to build up the female roles… There are certainly more female writers now than there were but the fact remains, most female parts are written by men. At least there are so many more female directors, producers and directors of photography [DOP] now. I worked with an amazing DOP last year, Reed Morano, who did 'Kill Your Darlings,' and what she did for that film was amazing. I think — I hope — the film industry is becoming a lot more balanced."

Ruffalo has long spoken out about his feminist viewpoints, and during the "Avengers" press tour, he put them in to action, going to bat for co-star Scarlett Johansson by fielding some of the sexist questions that she is constantly forced to answer.

In an interview with Vulture, writer/actor/comedian Jay Baruchel spoke about how he personally tries to combat Hollywood's tendency to underwrite female characters:

"I do [prefer writing women characters], just because I'm a mama's boy. I was raised by my mom, I have a little sister, and I'm constantly annoyed [by] how terribly written most females are in most everything -- and especially in comedy. Their anatomy seems to be the only defining aspect of their character, and I just find that untruthful and it straight-up offends me. A lot of the strongest people I know are chicks. And as a viewer, I get a kick out of watching real characters. So I take it upon myself to clean that shit up and write actual women. And I like writing strong women, because as a straight male, there's nothing more attractive to me than a strong girl."