GOP trolls set a dangerous trap for Dems: Why zombie centrism would doom the party 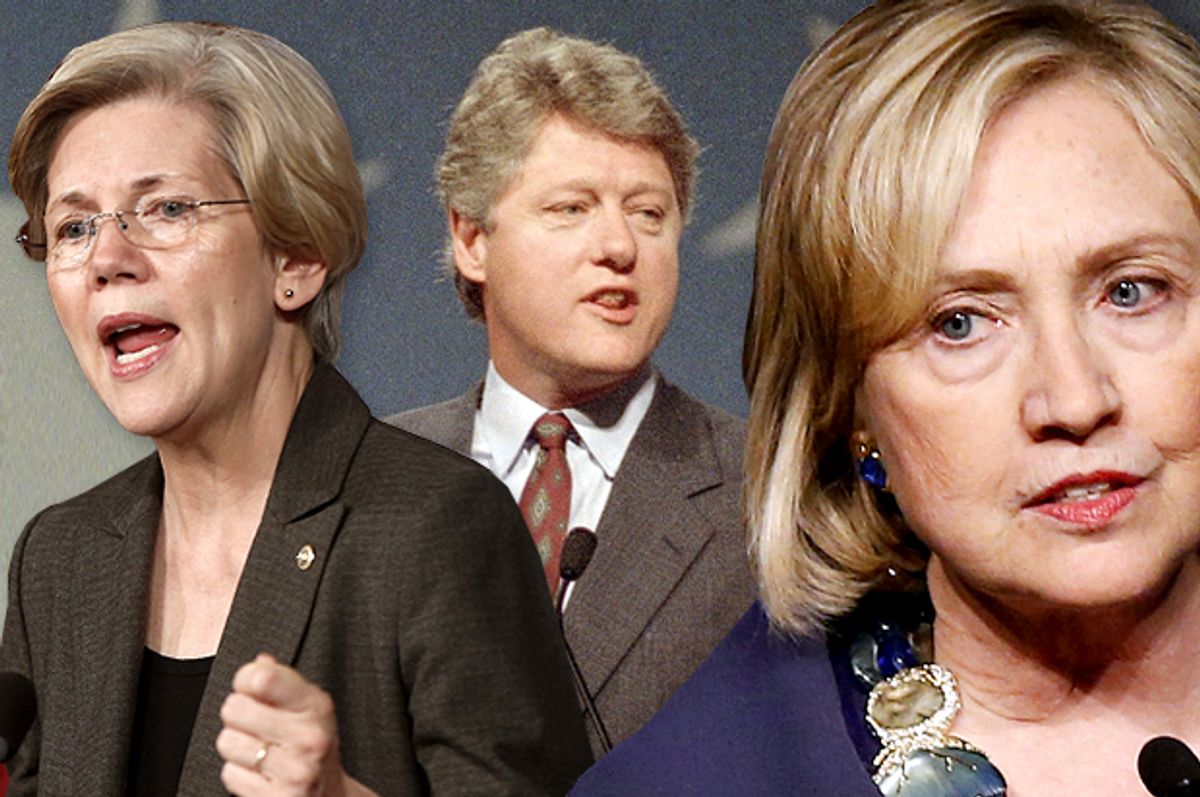 Former Bush advisor Peter Wehner is stuck in the 1980s, and he thinks the country should remain stuck there, too. His bewildering New York Times op-ed, “Have Democrats moved too far left?” (no question mark needed; he clearly believes they have), would be laughable -- except some centrist Democrats share his nostalgia for the Reagan era, and his loathing of Elizabeth Warren-style liberalism.

Wehner uses a tired template worn out by Mitt Romney to no avail in 2012: Barack Obama is more liberal than the centrist, sensible Bill Clinton, and the country is going to reject him and the party he’s led off the deep end.  That didn’t work out for Romney, and it won’t go well for Wehner and the GOP.

His argument starts with a whopper: “On most major issues the Republican Party hasn’t moved very much from where it was during the Gingrich era in the mid-1990s.” Norman Ornstein and Thomas Mann of Brookings, two centrist political scientists, convincingly demonstrated how wrong that is in their book “It’s Even Worse Than You It Looks.” Gingrich took the party to the far right; the Tea Party and its abettors dragged it off the map.

Most of Wehner's silly piece is devoted to venerating Bill Clinton, a man his fellow Republicans revered so much they impeached him. Clinton got tough on crime; Obama is a criminal-coddling menace. Clinton ended welfare as we knew it; Obama weakened Clinton’s reforms (this is a lie so bold that when Romney tried it, Gingrich himself said it wasn’t true.) It goes on: “Mr. Obama is more liberal than Mr. Clinton was on gay rights, religious liberties, abortion rights, drug legalization and climate change. He has focused far more attention on income inequality than did Mr. Clinton, who stressed opportunity and mobility.”

Wehner acts as though Mr. Obama has moved, all by his lonesome, on all of those issues. But the country has moved with him – and so has Mr. Clinton, by the way.

The former president himself has changed his stance on everything from gay marriage to the tough-on-crime policies he backed in the 1990s. "The problem is the way it was written and implemented is we cast too wide a net and we had too many people in prison," Clinton told CNN May 7. "And we wound up...putting so many people in prison that there wasn't enough money left to educate them, train them for new jobs and increase the chances when they came out so they could live productive lives."

Clinton and Obama have changed some of their stands over the years because the country has changed. Mass incarceration wasn’t a fact in the '90s; it has since become a defining feature of inner city struggles. Income inequality has accelerated since then. College is out of reach for more students (even though Clinton presided over the greatest expansion of college funding since the GI Bill; it wasn’t enough.)

Looking to succeed both Democratic presidents, Hillary Clinton does appear to be running to their left on a lot of issues. That’s not because she’s become a wild-eyed radical. She’s seen the problems the country faces – and yes, she’s seen the political winds shift. She will face a primary challenge not from a centrist like Sen. Mark Warner, but from socialist Sen. Bernie Sanders. Even a DLC Democrat like Martin O’Malley is expected to stake out a lane to Clinton’s left.

Wehner’s op-ed would be trivial trolling, and easy to ignore, but many Democrats agree with him. Also in the New York Times, Robert Draper recently featured the Senate race between two Maryland liberals, Chris Van Hollen and the more progressive Donna Edwards, as "the great Democratic crack-up of 2016." He depicts the race as being as polarizing, and as dangerous to Democrats' electoral hopes, as the rise of George McGovern in 1972.

Over at Third Way, that bastion of centrist DLC thinking, they’ve been warning about this left turn for a while. Third Way/DLC types have lost the one attribute that used to make them politically important: their focus on the future, and their effort to get the Democrats to move beyond the past. Now it’s Third Way types who are clinging to the '90s version of Bill Clinton liberalism, and maligning an emerging Democratic party that they either don't like or don’t understand.

They are talking to an electorate that mostly doesn’t remember the old battles of the '60s through '80s. Hell, this electorate can’t even be red-scared anymore: 42 percent of millennials in a Reason poll said they preferred socialism to capitalism (OK, there are reasons not to draw a lot of huge conclusions from that poll). It will be fun to watch them deal with Bernie Sanders in the race.

There are in fact real battles within the Democratic Party over the issues of economic opportunity, most notably on trade. But the notion that Democrats have moved farther left than the GOP has moved right is laughable. In the Obama years, Republicans haven’t just repudiated liberalism, they’ve repudiated their very own policies -- on the individual mandate for health insurance, cap and trade approaches to climate change, immigration reform, the earned income tax credit, infrastructure spending.

In the meantime, we’ve had a 35-year experiment in Republican policies on crime, opportunity and poverty – and they’ve failed. Welfare reform didn’t end either poverty or single parenthood. Mass incarceration criminalized more than a generation of black men, further destroying their communities. And the Bush tax cuts didn’t create jobs; they led to record deficits and came with the worst crash since the Great Depression.

Why do we listen to these people? Well, the Times can't be helped; it still publishes David Brooks and Maureen Dowd. The rest of us? We don’t. There’s still a constituency for scare scenarios among anxious, pro-Wall Street Democrats. But Hillary Clinton’s bold campaign (so far) shows that constituency is dwindling as well.