GOP's bloodthirsty Liam Neeson primary: The one issue which unites the Tea Party and the right

They agree on taxes and abortion, sure. But it's kicking some ass overseas that really pulls Republicans together 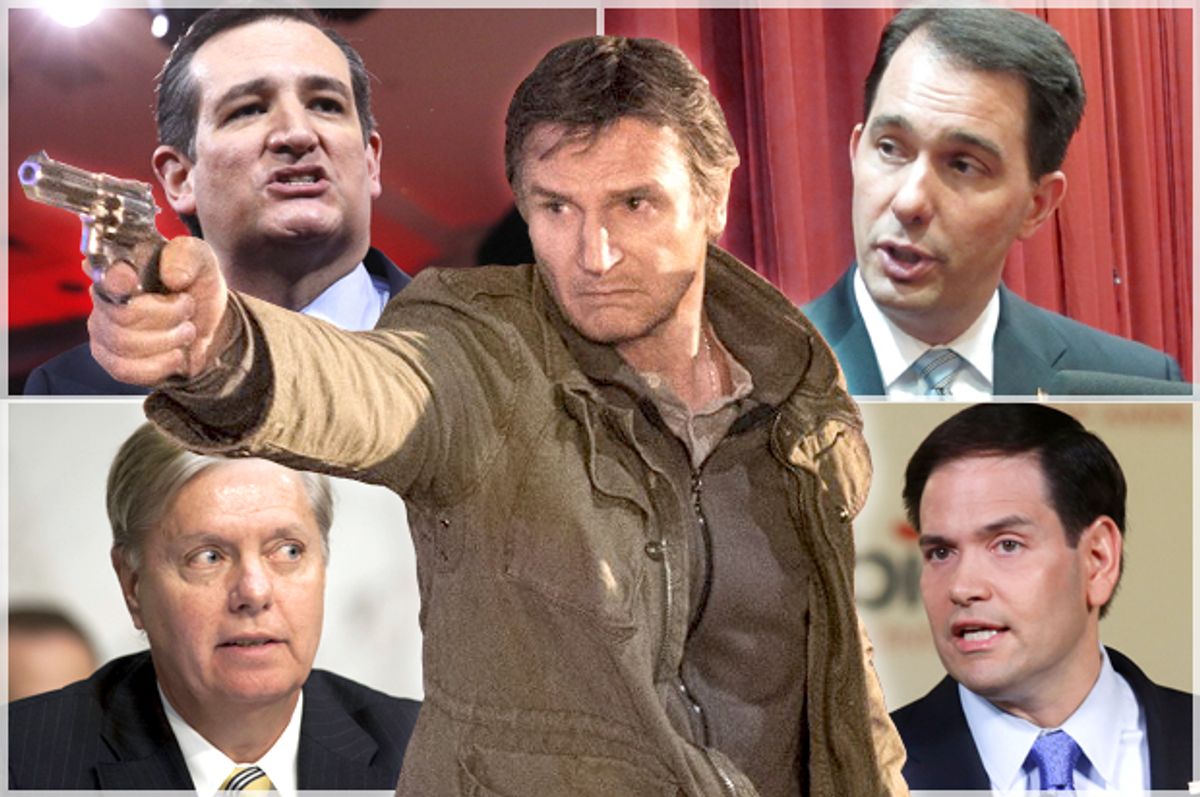 Last week, Salon featured a fascinating excerpt from the new book “The Jefferson Rule: How the Founding Fathers Became Infallible and Our Politics Inflexible” by David Sehat, which set forth the history of the right's long march to extremism over the past 30 years culminating with the Tea Party's takeover of the GOP back in 2010. He wrote that the far right had reached a tipping point by 2012 in which its adoption of "Jeffersonian principles" (often bent by Jefferson himself as a practical politician) had become a rigid, unyielding matter of faith rather than philosophy (which stands to reason since its adherents are mostly members of the religious right as well.) He wrote:

Although Bush was reelected, it had become obvious that the Jeffersonian-Calhounian rhetoric ceased to mobilize the electorate in the same way as the nation became less white and as conservative policy goals failed to pan out. By 2009, the conservative movement hit crisis. “In retreat,” [ the New York Times' Sam] Tanenhaus argued, “the nullifying spirit has been revived as a form of governance—or, more accurately, anti-governance.” Led by the Tea Party, Republicans stumbled into a series of unwinnable fights over the budget, the debt ceiling, and Obamacare, each justified, according to Tanenhaus, “not as a practical attempt to find a better answer, but as a ‘Constitutional’ demand for restoration of the nation to its hallowed prior self.”

But now that approach had come to its logical endpoint after the 2012 election. The Jeffersonian argument about maintaining founding principles had degenerated into a Calhounian vision of state-sponsored nullification and retrenchment. “Denial has always been the basis of a nullifying politics,” Tanenhaus believed, but after the election it was obvious that “modernity could not be nullified.”

Perhaps. But you can forgive the Tea Partyers for thinking otherwise since they went on to substantially enlarge the GOP's House majority and take over the Senate in 2014 in what was widely considered to be an electoral rout. Were they really mistaken in believing that a rousing victory was actually  a validation of their obstructionist tactics? One might question that when one considers the implications of their equal inability to win national elections in presidential years, but if you were a Tea Partyer, you might say that a standoff between the branches is just what the founders ordered. There are many ways to look at this. But the fact remains that as much as we might wish that Republicans now see the Tea Party (aka the Republican base) as a liability and are going to eschew their hard-line intransigence, there is scant evidence to back that up. Certainly the current presidential primary offers little hope in that regard. Even the so-called "mainstream " candidates like Scott Walker and Jeb Bush sound like hate radio hosts emceeing the Phoenix stop on the Tea Party Express Tour circa 2009.

But there was one notable exception to the Tea Party's continued success and it happened in the state widely considered to be the most conservative in the nation, the home of the man many believe is the real Godfather of the Modern Conservative/Tea Party movement, John C. Calhoun of South Carolina. For all of the Tea Party's clout in the Republican Party it could not manage to unseat one senator they consider to be among the most traitorous of all RINOs (Republican in name only), Lindsey Graham.

Jenna McLaughlin at Mother Jones wrote about this last week:

"I'm making that a tea party goal to get scoundrels like Lindsey Graham out of office," Greg Deitz, a Charleston Tea Party organizer, told Politico.

In 2010, about 100 tea party activists gathered outside Graham's office in Greenville, South Carolina, to protest his support for the bipartisan climate bill. "No cap and trade," they chanted. Two different countywide GOP organizations in South Carolina voted to censure Graham noting that "in the name of bipartisanship—[he] continues to weaken the Republican brand and tarnish the ideals of freedom, rule of law, and fiscal conservatism."

Tea party activists routinely booed him when he spoke at town hall meetings. At one gathering at the Bluffton Library in June 2010, activists in the audience interrupted Graham with angry questions and accusations when he asked what the biggest problems facing the world were. One audience member, according to the Beaufort Gazette, told Graham to "be conservative and quit reaching across the aisle."

Graham further upset the tea party by meeting with Obama several times to discuss working together on various issues, such as "closing Guantánamo Bay and bringing terror suspects to justice," according to Newsweek. Graham was a former military prosecutor who served on the Armed Services and Homeland Security Committees, and Joe Biden invited him over to his home for a steak dinner to discuss Afghanistan.

And Graham hates them right back. He even called them bigots and said they were a flash in the pan. And yet he won the general with 55 percent of the vote after winning huge in the primary. Odd that in places like Indiana and Utah the Tea Party can unseat a Republican incumbent but not in the blood-red state of South Carolina, isn't it?

"There was speculation that he would face severe tea party resistance," says Robert Wislinski, a political strategist based in South Carolina. "[But] that never really materialized." Graham raised $13 million for the primary race, and mobilized a powerful campaign. Five challengers who were seeking their first elected office, and one incumbent state senator, ran against him, but their combined campaign war chest was only about $2 million. The Republican opposition was split, and Graham's opponents weren't particularly well known. Nor did the opposition get any help from national tea party activists like Sarah Palin, who remained silent on the race. "The conservative opposition could not unify for the singular purpose of defeating Graham," wrote the conservative blog RedState in January, and Graham won with 56 percent of the vote.

So, why couldn't they get it together? True, the rumors about Graham's sexuality are always lurking under the surface but that doesn't explain it. In a hardcore right-wing state with many politically active social conservatives, that would not likely work in his favor. Certainly he didn't win because those same right-wingers are yearning for bipartisanship and Graham's willingness to chow down on rib-eye with Joe Biden. They hate bipartisanship almost as much as they hate food stamps.

There is only one reason that South Carolina would reelect Graham with a solid majority: They may not like his willingness to break bread with a Democrat but they love Graham's extreme hawkishness. There is no state in the nation more pro-war than South Carolina. (They liked it so much they started one with the United States!) And as much as the political establishment wants to believe that the Tea Party is libertarian/isolationist, they will eagerly vote for the warmonger every time.

American military dominance is one of the strongest ties that binds the most important factions of the Republican Party together. Yes, they all hate taxes and abortion. But it's the prospect of kicking ass and taking names that really gets their blood up. There might be a handful of libertarians lurking around the edges of the party who think we shouldn't spend money on anything to do with foreigners, even to kill them. But for the vast majority of right-wingers the prospect of taking down somebody, anybody, is downright inspirational.

(And yes, there are plenty of Democratic politicians who support these wars as well, usually in a vain attempt to prove they aren't effeminate wimps. The right never buys it --- if you're going to be a true warmonger, you don't belong to the party of peaceniks, gays and feminists.)

None of this is to say that Graham has a snowball's chance in Charleston of winning the Republican nomination for president. Sure he's an uber-hawk, but with the exception of Rand Paul (and even he has become more stridently militaristic) they are all doing their best to sound as close to Atilla the Hun as they can manage (or Liam Neeson, anyway). But Graham's easy cruise to reelection proves that any number of Tea Party apostasies may be forgiven as long as a candidate is sufficiently bloodthirsty. Perhaps this explains why we're seeing the most bellicose primary campaign in recent memory.