Violence against Black Americans is real and documented, so why does White America continue to deny it? 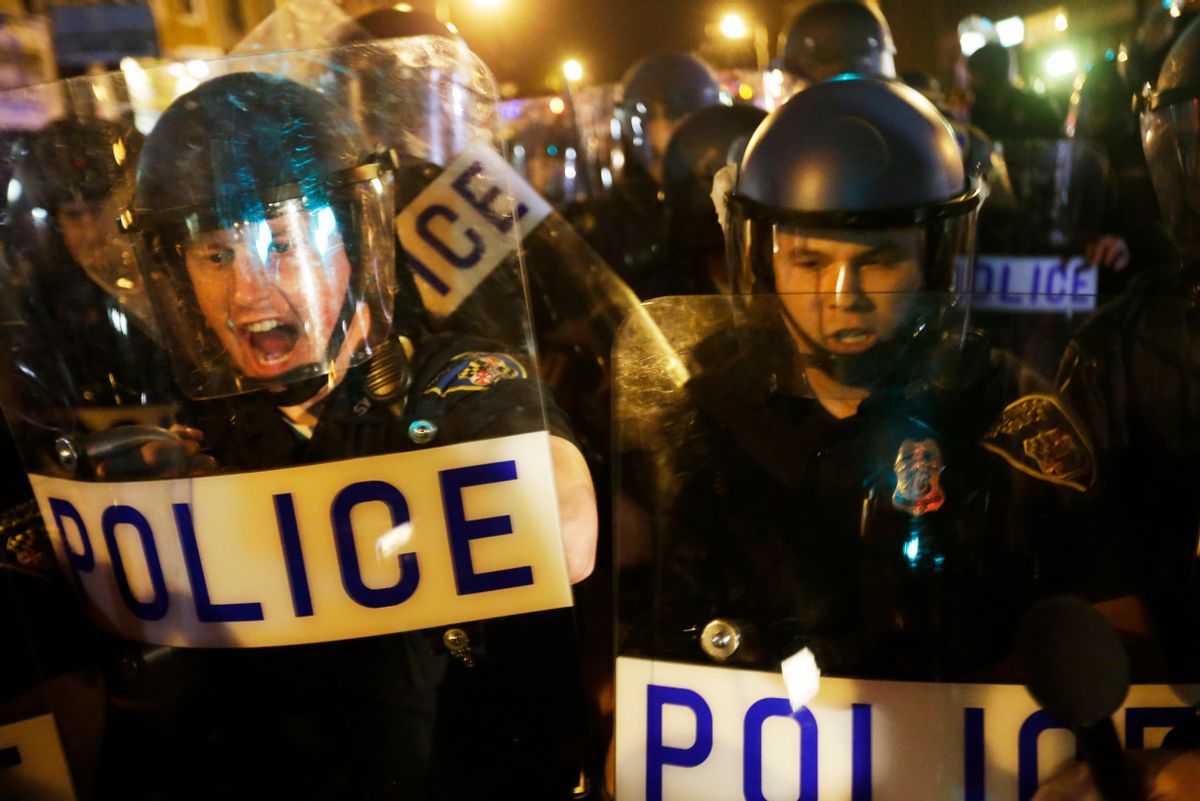 Writing at Salon on Wednesday, Jenny Kutner details "a grotesque image recently made public by a Cook County judge," showing "two former Chicago police officers holding rifles and posing next to an unidentified black man, who is shown wearing fake deer antlers and sticking his tongue out, as if he had been hunted and killed." You can see that photo here.

Neither the Chicago police bureau nor the FBI have been able to identify the African-American man in the photograph, for whom McDermott and Finnigan never filed an arrest report. Both officers admitted to appearing in the picture, however, with Finnigan describing the decision to take it as “spur of the moment.” He also claimed to have released the man without arresting him, after discovering he had no serious criminal background.

Chicago's cops, like America's cops more generally, treat black people like animals to be hunted and killed. The badge itself is a license to kill. America's police culture is both authoritarian and racist. Yet, every video recording and photo, or any other evidence of police thuggery, is treated by the mainstream news media like a mysterious thing that was just discovered, a unicorn or leprechaun in one's den taking a crap on the floor, when in fact that member of the fae is a welcome house guest for White America.

There are centuries of horrors and humiliations that have been forced on Black and brown folks by White America. Unfortunately, much of that foul treatment was dismissed by too many white Americans as Black folks' hysterics and histrionics, "urban legends," exaggerations. But the "rough rides" given by cops to the Black and brown people they arrested were not figments of the collective Black American psyche. They were true. See Freddie Gray in Baltimore for just one of many examples. Secret sites where the cops would "disappear people" and then torture them are not urban legends. See Homan Square in Chicago.

During centuries of white-on-black chattel slavery (and then Jim and Jane Crow), the following things -- black babies as alligator bait, selling black human property for medical experiments and other tortures, the skin of black people used for shoes and other types of apparel, even slave "breeding farms" -- are myths and folktales only to the White Gaze and a White collective imagination deeply invested in its own innocence and nobility. Black America knows those stories to be true. Empirical reality and the historical record are evidence of the reality, the hard stuff, of life in a racialized society that has routinely made the bizarre and the "peculiar" into the banal and the quotidian.

From initial colonial and Imperial encounters, to the later intimacy of slavery and bonded labor, Black and brown people, aboriginal and other First Nations brothers and sisters, had to invent language to describe "The White Man" they encountered for the first time and then later came to regret having ever known.

"The White Man" became a ghost or a monster. (In fact, the robes of the Ku Klux Klan represent the ghosts of the Confederate dead who have returned to avenge themselves on now free black Americans.) He haunted. He killed. He raped. He destroyed.

"The White Man" swallowed black lives whole, putting them in the bellies of monsters that were living hells afloat on water, and manned by magical creatures for a death-laden journey that later came to be known as The Middle Passage:

The first object which saluted my eyes when I arrived on the coast was the sea, and a slave-ship, which was then riding at anchor, and waiting for its cargo. These filled me with astonishment, which was soon converted into terror, which I am yet at a loss to describe, nor the then feelings of my mind. When I was carried on board I was immediately handled, and tossed up, to see if I were sound, by some of the crew; and I was now persuaded that I was got into a world of bad spirits, and that they were going to kill me. Their complexions too differing so much from ours, their long hair, and the language they spoke, which was very different from any I had ever heard, united to confirm me in this belief. Indeed, such were the horrors of my views and fears at the moment, that, if ten thousand worlds had been my own, I would have freely parted with them all to have exchanged my condition with that of the meanest slave in my own country...

In a little time after, amongst the poor chained men, I found some of my own nation, which in a small degree gave ease to my mind. I inquired of these what was to be done with us; they gave me to understand we were to be carried to these white people's country to work for them. I then was a little revived, and thought, if it were no worse than working, my situation was not so desperate: but still I feared I should be put to death, the white people looked and acted, as I thought, in so savage a manner; for I had never seen among any people such instances of brutal cruelty; and this not only shewn towards us blacks, but also to some of the whites themselves. One white man in particular I saw, when we were permitted to be on deck, flogged so unmercifully with a large rope near the foremast, that he died in consequence of it; and they tossed him over the side as they would have done a brute. This made me fear these people the more; and I expected nothing less than to be treated in the same manner.

I could not help expressing my fears and apprehensions to some of my countrymen: I asked them if these people had no country, but lived in this hollow place (the ship): they told me they did not, but came from a distant one. 'Then,' said I, 'how comes it in all our country we never heard of them?' They told me because they lived so very far off. I then asked where were their women? had they any like themselves? I was told they had: 'and why,' said I,'do we not see them?' they answered, because they were left behind. I asked how the vessel could go? they told me they could not tell; but that there were cloths put upon the masts by the help of the ropes I saw, and then the vessel went on; and the white men had some spell or magic they put in the water when they liked in order to stop the vessel. I was exceedingly amazed at this account, and really thought they were spirits.

Tales of "The White Man" would be used to scare children into obedience, and like most folk tales and children's stories they were lessons to prepare those youngsters for life in an unfair world. But "The White Man" is not a chimera. He is real. We see him when cops kill and abuse innocent and defenseless Black and brown people in America. he choked Eric Garner to death. He shot Tamir Rice, stole his childhood and his life. "The White Man" maces and electrocutes Black people who are suffering from a stroke while sitting in their car. But America does not want to confront "The White Man," because that would mean reflecting on its own behavior and culture of racialized violence.

The innocence and nobility of Whiteness and "The White Man" are bedrock lies for America and the West that dissolve under even the most minimal levels of critical inquiry. If America looked in the mirror at "The White Man" looking back, it could be either a moment of catharsis, where the violence and meanness of White Privilege and White Racism were owned and internalized with pride (yup! that is us, White America, what a good thing, let's stop pretending we are surprised or ashamed!) or where upon seeing "The White Man" in his full glory a moment of White Fragility would freeze the viewer in stone as though he or she were touched by Medusa.

"The White Man" is real. Will there ever be a champion or hero capable of defeating him for all time?

Or will "The White Man" always linger in the body politic and collective subconscious of the United States because it is a country founded upon the twin sins that are the genocide of millions of First Nations peoples and the enslavement and murders of Black human property?