Ending Obama's "War on Coal" won't save the coal industry, despite what Rick Santorum and other Republicans say 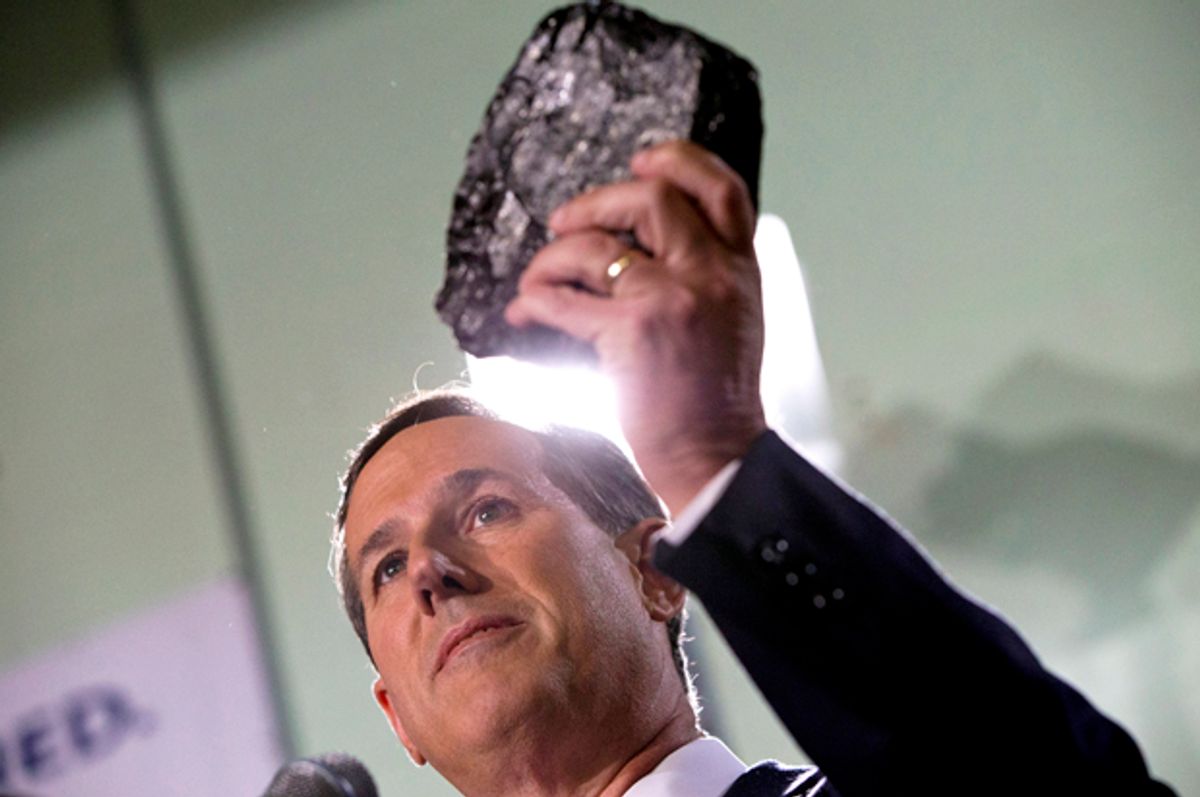 When Rick Santorum announced his 2016 presidential candidacy earlier this week, he brought props with him. “Ladies and gentlemen, this is a piece of coal,” Santorum said at the beginning of his speech, holding up a glossy chunk of anthracite for the crowd to inspect. “This is where my American story started.” Glancing lovingly at the brick of compressed carbonized vegetation as if it were a photo of a dear, departed relative, Santorum said that his coal-mining immigrant grandfather “didn’t come for this,” referring to the coal, “he came for THIS,” referring to the folded American flag he’d dramatically pulled from behind the lectern. The crowd went wild. Yay coal! Yay America!

Santorum’s literal embrace of coal will soon be matched by Jeb Bush’s figurative bear hug of the coal industry, as he travels next week to a “Civil War-themed golf tournament” in Virginia put together by the country’s most powerful coal barons. Jeb’s already staked out an “eh, science, whatever” position on the human contribution to climate change, so there’s a roughly 100-percent chance he’ll emerge from his golf weekend with a renewed commitment to rejuvenating the coal industry as part of “America’s 21st-Century Energy Revolution” or whatever nonsense he comes up with.

The coal industry’s future has been a key component of Republican political strategy, as candidates across the board have lashed out at the Obama administration’s “War on Coal.” It’s a smart bit of politicking – attacks on “job-killing regulations” and hippie environmentalism get the conservative base riled up, and the plight of the out-of-work coal miner plays to broader resentments working class voters feel over disappearing jobs and evaporating economic opportunities. But the implicit, and sometimes explicit, promise of the anti-“War on Coal” rhetoric – that the coal industry would be thriving but for liberal political meddling – is a lie.

Economics is what’s killing the coal industry. Coal is a dirty fuel that costs a lot of money to pull from the earth, at least when compared to cheaper alternatives like natural gas, which produces fewer harmful emissions when burned. In Appalachian coal country, where Rick Santorum traces his roots, decades of enthusiastic mining have depleted all the easy-to-extract coal, leaving thin seams that are more difficult (and more expensive) to mine. The industry itself has been bleeding jobs since the early 1980s as machines have supplanted human labor.

These economic weaknesses have left the industry vulnerable, and environmental activists are exploiting the opening. As Politico’s Michael Grunwald reported this week, the Sierra Club’s “Beyond Coal” campaign has established itself as the coal industry’s principle foe not through high-minded appeals to our shared environmental future, but through the cold reality of the balance sheet. They’re using economic arguments to convince local utility commissions and regulatory boards to close down coal plants by arguing that expensive, dirty, coal-fired energy just isn’t worth it anymore. The president’s new environmental regulations, for all the heat they get from Republicans on the stump, are merely helping along the industry’s natural decline.

And that gets to the cynicism at the heart of the “War on Coal” messaging – that a Republican president can bring coal roaring back simply by undoing the Obama environmental agenda. It’s nowhere near that simple, as Danny Vinik notes. “Large energy changes like the move away from coal are societal in scale, and driven by forces that are hard to reverse,” he writes. “These regulations are part of something much longer, a consensual shift in what America expects from its fuels, and one very unlikely to be rolled back.”

Instead of preaching a new, different future for those people who’ve been left behind by coal’s long decline, Republican presidential candidates are instead signaling a return to coal’s glory days as the cheap, plentiful fuel of choice that powered mountain-town economic booms. It’s becoming clearer and clearer that that’s not going happen. Santorum’s American story may have started with coal, but he shouldn’t be telling other people that their American coal stories will have a happy ending.