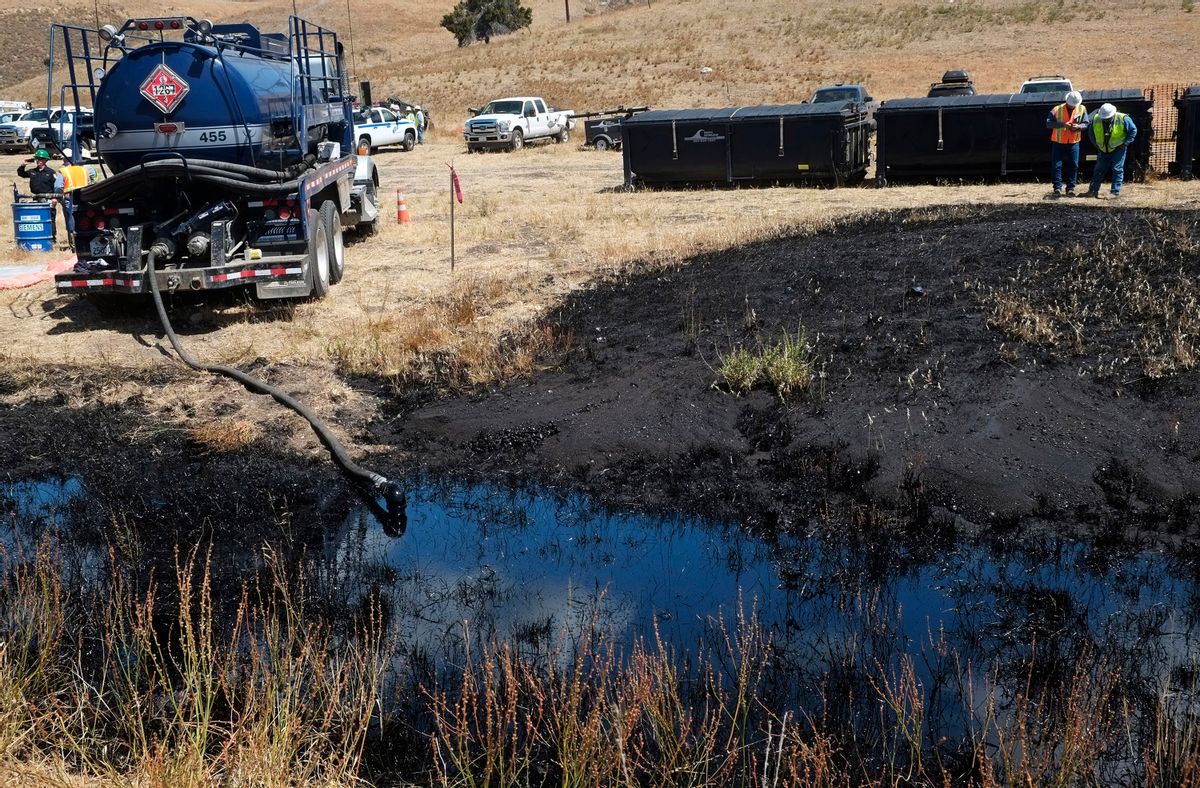 FILE - In this May 20, 2015, file photo, workers monitor the site of an underground oil pipe break up a hill from Refugio State Beach, north of Goleta, Calif. The pipe, owned by Plains All American Pipeline, spewed oil down a culvert and into the Pacific on May 19 before it was shut off. Democratic U.S. Sens. Barbara Boxer and Dianne Feinstein say the response to the oil spill that blackened beaches and created a 10-square-mile slick on the ocean was "insufficient." and called on federal regulators to provide more details on the activities and decisions by Plains. (AP Photo/Michael A. Mariant, File) (AP)
--

SANTA BARBARA, Calif. (AP) — Firefighters, emergency workers and officials from Plains All American Pipeline had gathered last week at a fire station preparing to train for the worst — an oil spill — when a 911 call came in reporting a noxious smell in the air at a nearby beach.

The Santa Barbara County Fire Department rushed to the shoreline, where they discovered oil flowing across a beach and into the Pacific. What was supposed to be a drill turned real.

"It was very black. You couldn't see the sand anymore," fire Capt. Craig Vanderzwaag recalled after arriving at the scene of the leak shortly after noon May 19. "You could see rolling waves with black oil lapping up on the beach."

By the time the firefighters traced the source of the spill to a ruptured underground pipeline, thousands of gallons of crude oil had escaped. As oil fouled the sand and water, firefighters wielding shovels and axes moved dirt and rocks to prevent more oil from spilling into a drainage ditch, but the leak quickly stretched 9 miles along the coast.

What was done that day to detect and stop the spill and protect some of the most fabled coastline in California has come under scrutiny, as officials continue cleaning up the mess created by a leak estimated at up to 101,000 gallons while trying to figure out what went wrong.

In a letter Thursday to the Pipeline and Hazardous Materials Safety Administration, U.S. Sens. Barbara Boxer and Dianne Feinstein of California labeled the response to the spill "insufficient." They questioned why the line lacked an automatic shut-off valve, and whether some workers were left on the sidelines while the leak spread.

"We need answers about why this happened, why the response was insufficient and what can be done to prevent another tragic spill like this from happening in the future," said the letter, which was also signed by Massachusetts Sen. Edward J. Markey, a fellow Democrat.

"We are concerned that insufficient preparation may have slowed down the response effort," they wrote.

In reply, Plains All American said it was a "competent and experienced operator."

"We train regularly for situations such as this, hoping that they will never happen. However, in a real event, no one is fully satisfied with the speed of response," the company said in a statement late Thursday night. "Upon confirming the release, we immediately activated our emergency response plan and marshaled critical resources to the scene, scaling up those resources quickly as we better understood the cleanup requirements."

Among the senators' concerns: According to disclosures so far, it took Plains about 90 minutes after the oil spill was confirmed to notify the National Response Center, a clearinghouse for reports of hazardous material releases that coordinates responses. Additionally, Plains had reported problems with the line earlier that day.

"We are concerned that Plains Pipeline may not have detected this spill or reported it to federal officials as quickly as possible, and that these delays could have exacerbated the extent of the damage to the environment," the senators wrote.

Linda Krop, chief counsel of Environmental Defense Center, said she was at the shore until 10 p.m. the day of the spill and nothing was being done to prevent crude that had fouled the beach and rocks from washing into the sea.

"The response was extremely tardy that allowed oil to get in the water where it will never be fully recovered," Krop said. "Waves were washing oil off the beach and off the rocks and nothing was being done."

Earlier Thursday, officials said the ruptured section of pipeline had been removed for analysis. Artealia Gilliard of the Pipeline and Hazardous Materials Safety Administration said the section will be wrapped in protective insulation before it is sent to a laboratory in Ohio for metallurgical testing.

Coast Guard Capt. Jennifer Williams said the effectiveness of the response will be evaluated as part of the investigation. She said it took a while to get the cleanup ramped up because people had to come from out of town.

"During the early stages, people didn't even know how much was on the beach. People were getting to the scene and trying to ascertain how big a problem it was," she said.

The spill marred the same stretch of shoreline as a 1969 oil platform blowout that helped spawn the modern environmental movement. That spill spewed more than 3 million gallons of crude oil into the ocean, spoiled miles of beaches and killed thousands of birds and other wildlife.