Why Bill Nye really pissed off the Ted Cruz right: It's no longer possible to avoid talking about climate change 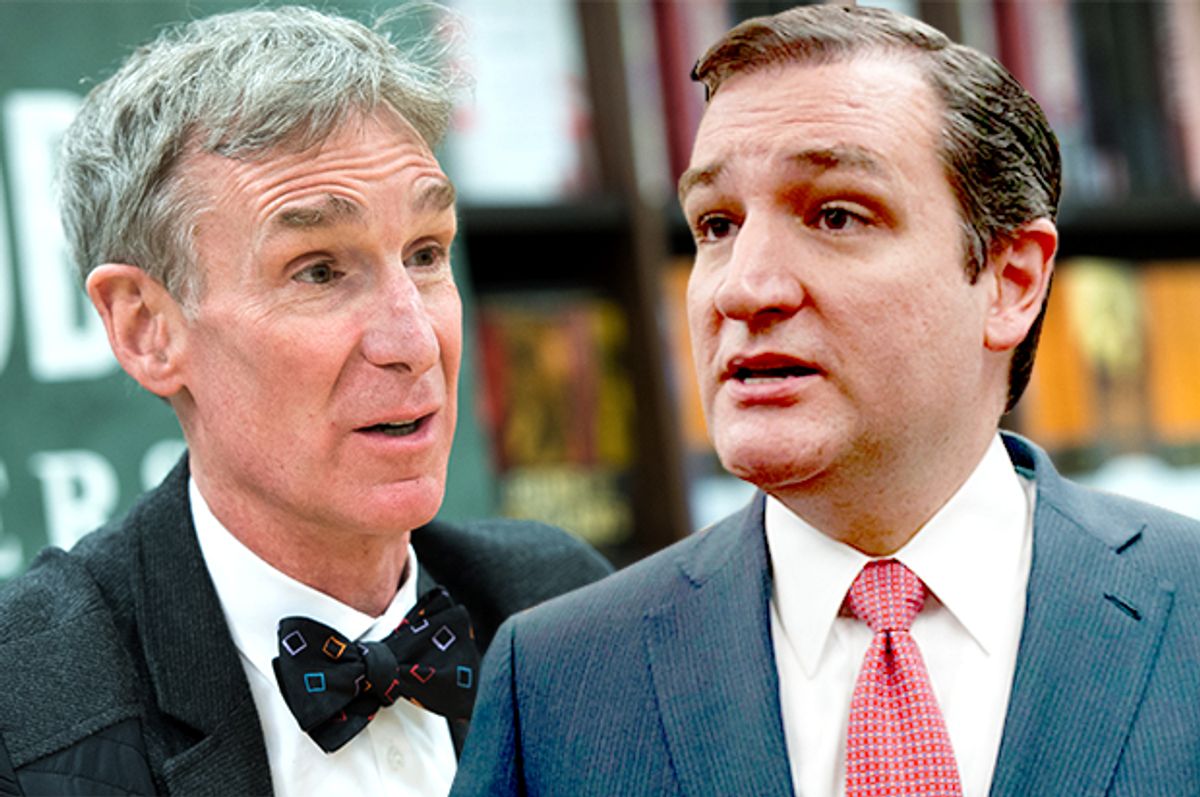 Bill Nye, who is not a scientist but who often plays one on TV, has attracted a fair share of notoriety for debating topics that shouldn't need to be debated. That tendency has turned him into a spokesperson for the battle against anti-scientific thinking, but it's also made him an easy target for said (non)thinkers -- which explains why the climate-denying right collectively lost its shit this week when Nye suggested that weathercasters might want to bring a discussion of climate change into their coverage of Texas' deadly flooding.

Alright, he put it a bit less delicately than that:

But the frenzied right seems to believe that Nye was suggesting that the floods were directly caused by climate change, or that the scary images coming out of Texas can somehow be offered as "proof" that climate change is happening.

That's an uncharitable interpretation of what Nye was going for, to say the least. We don't need natural disasters to validate the theory of climate change, because we already have enough studies and analyses and direct observations to convince 97 percent of scientists that climate change is real, and primarily driven by human activity. And if you read his tweet, Nye never suggested that the flooding was caused by global warming -- he merely pointed out that climate change, which experts say is exacerbating extreme weather events like this, should be part of the conversation.

Seeing as how it's well understood that "extreme precipitation events" are already becoming more extreme, and more common, that this trend is expected to intensify with human-caused warming, and that the choices we make today, from the amount of greenhouse gases we emit to how we build our cities, will impact our ability to weather such changes, Nye's absolutely right -- it'd be negligent not to talk about the connection.

And Nye's detractors are going to have a lot harder of a time arguing with that, which surely explains why they're really upset: If they had their way, we wouldn't be talking about climate change at all.

Texas Sen. Ted Cruz, as a prime example, couldn't have been pleased that the floods gave reporters an opportunity to put him on the spot about his climate-change denial. The question came up during each of the press conferences Cruz held on the government's response to the disaster; both times, CNN reports, he managed to dodge it. "In a time of tragedy, I think it's wrong to try to politicize a natural disaster," the senator told reporters Wednesday. "I think the focus now is on caring for those who have lost their lives and lost their homes."

Cruz appeared to realize that it was also the wrong time to accuse "global warming alarmists" of being "flat-Earthers," as he's done in the past. But it's obvious that Cruz doesn't think there's a right time to be talking about climate change, and his insistence that bringing it up now politicizes an otherwise "natural" disaster shows just how firmly entrenched he remains in denial.

In a Facebook comment, Michael Wehner, a computational climate scientist at Lawrence Berkeley National Labs who Hayhoe called "THE MAN when it comes to understanding the relationship between natural variability, human influence, and climate extremes," confirmed that the recent floods were significantly more severe than they would have been in a pre-industrial climate, and that human-driven warming also doubled the likelihood of Texas' 2011 drought. And he expressed his concern that the general conversation still hasn't seemed to grasp these realities, let alone the severity of the situation.

"I fear that as a community, we have very severely understated the present dangers," Wehner wrote. "To say nothing of the future."

When should it be appropriate to talk about climate change? All the time. We should talk about it when floods cause death and devastation, because it's as good a representation as we can ask for of what we can expect in the future. We should talk about it when droughts provoke crises of a different sort, because those too are and will continue to be made more likely by climate change. We should talk about it even when there is no crisis to peg headlines to or scary photo galleries to share, because, as President Obama recently reiterated to graduates at the Coast Guard Academy, climate change is a real and pressing threat to our national security. As a clown car of climate deniers vie to become the next president of the United States, we should be talking about it constantly, lest they keep trying to avoid engaging with the science.

And until everyone fully grasps the urgency with which we need to address the causes of climate change and prepare for its unavoidable impacts, we shouldn't shut up about it.