Love "Game of Thrones?" Thank "unfashionable" Tolkien and C.S. Lewis, who went against the grain and conquered pop culture 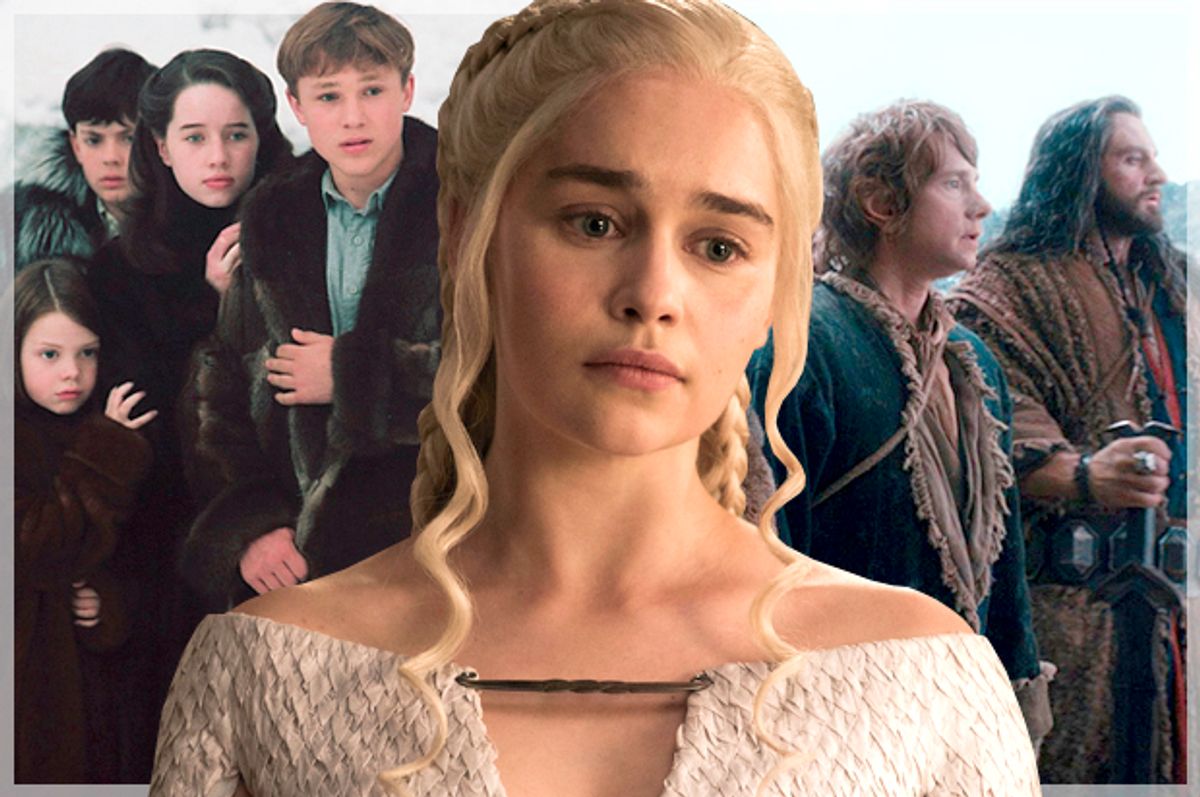 For nearly 20 years in the middle of the 20th century, a small group of men met twice a week in the British university town of Oxford. They drank, they smoked, they told the occasional off-color joke and they sang a lot of very old songs. They also read aloud to each other from works they’d written, stories and papers that they believed to be radically out-of-step with their time. Everything about the greater world around them conspired to persuade them that what they valued and enjoyed was either doomed or already obsolete. One of them happily described himself as a “dinosaur.” Yet they would go on to shape global culture in ways we still feel today.

These men were of course the Inklings, the two most famous members of which were J.R.R. Tolkien and C.S. Lewis. Tolkien wrote two books — one for children and the other for adults — that would found a booming new genre of fiction, serve as the basis for a gazillion-dollar film franchise and extend their tendrils into every human creation from “Game of Thrones” to videogames to literary novels like Junot Diaz’s “The Brief, Wondrous Life of Oscar Wao.” Lewis became a famous lay writer and broadcaster on the subject of Christianity, a role that landed him on the cover of Time magazine in 1947. Although his own children’s fantasy novels, “The Chronicles of Narnia,” were less strikingly innovative than Tolkien’s fiction, they’ve influenced writers ranging from Neil Gaiman to Jonathan Franzen.

Most literary and artistic movements aim to change the world, or at least to change whatever medium their members work in. From the Surrealists to the Abstract Expressionists to the Oulipo movement, they boast that they’ve devised a brand-new way of writing or painting that offers a truer portrait of how we live now or that strips off the empty conventions of the past to reveal the bedrock of reality.

The Inklings were different. They clung by their fingernails to the past, to old languages and old books and old-school habits and values. They could be cranky geezers — beer drinkers who wore tweed, refused to admit women to their ranks and recited Anglo-Saxon poetry for fun. They expected to be ever-more marginalized and sneered at, although they did fight like hell to keep Oxford from updating its syllabus to included such new-fangled entertainments as Victorian novels. Still, they assumed that they’d lose eventually. They were so unfashionable! So how did they end up taking over popular culture?

Many books have been written about the individual members of the Inklings, and there are two major group biographies: Humphrey Carpenter’s 1978 book, “The Inklings,” and now “The Fellowship: The Literary Lives of the Inklings” by Philip Zaleski and Carol Zaleski, a husband and wife team. The new book is thicker than Carpenter’s, more erudite and more fluently written, but in most respects it tells the same story. One of the peculiarities of Tolkien and Lewis scholarship is that, for all their influence, neither writer is seen as a fitting subject for serious study, so most of the criticism and research work on them has been done by partisans. In the case of Tolkien, those partisans tend to be fans, and with Lewis, it’s Christians.

Now, if it weren’t for the devotees who gather up scattered papers, organize archives and preserve the Great One’s former home for posterity, then other, later, more skeptical critics and biographers wouldn’t have any source material to work with. (The Marion Wade Center at Wheaton College in Illinois, a Christian liberal arts school, for example, is a lavish research facility dedicated to Lewis, Tolkien and several other writers who were either in or associated with the Inklings.) At a certain point, however, you want a broader, more objective point-of-view.

That’s not really on offer in “The Inklings,” for the Zaleskis specialize in matters of faith: She’s a professor of religion at Smith and he edits the annual “Best Spiritual Writing” series. They’re primarily interested in the Inklings’ Christianity, which was indeed shared by the members of that loosely affiliated group. Tolkien was an devout Catholic who attended mass every morning. Lewis, who for many years was Tolkien’s closest friend, famously converted (to the Anglican Church) in 1930, under the persuasive influence of Tolkien and another Inkling. Lewis’ Christianity was very public, but Tolkien’s was lifelong and possibly even more deeply felt. “Tolkien’s best argument that it is impossible to disentangle great art from religion,” the Zaleskis write, “is ‘The Lord of the Rings’ itself.” To fellow believers, it seems obvious what it is that makes “The Lord of the Rings” or “The Lion, the Witch and the Wardrobe” so enthralling to readers: it’s the Christianity, folks!

But that doesn’t explain why these books appeal to so many people who aren’t Christians — either because they belong to another religion or because they choose no religion at all. Some Christians may believe that, say what we will, what we respond to in “The Lord of the Rings” is its Christian essence. But in that case, why aren’t we converted once the truth is revealed to us? If anything, discovering the Christian subtext of Tolkien and Lewis’ fiction can be alienating to a young reader. When, in my early teens, someone clued me into the religious symbolism of “The Lion, the Witch and the Wardrobe” — the great, cherished book of my childhood — the revelation made me reject Lewis, not embrace his God.

Although both Lewis and Tolkien were considered serious scholars by their peers at Oxford, their extracurricular activities — Tolkien’s “fairy tales” and Lewis’ popular proselytizing — were viewed as de trop: childish and vulgar, respectively. They seem to have embarrassed the whole town. As recently as the late 2000s, you could browse the postcard racks in Oxford’s bookshops and souvenir stands in vain seeking images of either man, while photos of Lewis Carroll and Oscar Wilde abounded. As for walking tours, that most genteel form of cultural tourism: No joy for Inkling buffs, although Inspector Morse fans had an embarrassment of options to choose from. Only the Eagle and Child, the pub where the Inklings met, had mounted any kind of commemoration, in the form of a few framed photos and a placard hung over the fireplace.

Yet Tolkien, and to a lesser degree Lewis, arguably have a bigger foothold in the early 21st-century imagination than Carroll, Wilde or some fictional police inspector. Why should that be? Surely one of the best explanations so far has been advanced by the academic and Tolkien scholar T.A. Shippey, who believes that Tolkien drew forth the long-submerged mythic past of the Anglophone world by means of his deep, historical knowledge of the English language. It’s a pretty wonky argument, but given how much Tolkien’s place names and other coinages seem to resonate with his fans, it’s also a plausible one.

As a child, what I liked best about the Narnia books wasn’t the passion and resurrection of Aslan, but the talking animals and, above all, the creatures from classical, Norse and Germanic mythology. And, in fact, Lewis’ own interlude of unbelief — from his teens through his late 20s — was, he wrote, motivated by his love of pagan cultures, imagery and stories. It wasn’t until Tolkien convinced him he didn’t have to give up these delights, that there was a way to reconceive of them as premonitions of the Christian truth, that Lewis was finally able to convert. When critics dismiss “The Chronicles of Narnia” as no more than crypto-Christian parables, they miss what’s right in front of their faces: that the materials the series is built from are almost entirely non-Christian, in fact pre-date Christianity. Christianity may be old, but that stuff is older.

Both Lewis and Tolkien — whose lives are recounted with those of two other Inklings, Owen Barfield and Charles Williams, in the Zaleskis’ book — had insecure childhoods; Lewis’ mother died before his tenth birthday and Tolkien was orphaned at 12. Both endured the horrors of the trenches. Tolkien fought at the Battle of the Somme, in which 20,000 men were killed on the first day alone. Lewis became distraught when, years later, Barfield merely attempted to talk to him about his experiences on the front lines. Both men lost several close friends to the war. As a rule, the Inklings rejected modernism, the literary and artistic movement that arose in response to World War I, that regarded it as an invalidation of the old order and the occasion to create something new. Instead, Tolkien, Lewis and company craved something even older than the old order, a stable, pastoral, English idyll epitomized by Tolkien’s Shire and a culture that told tales of magic, heroes and quests.

The standard sophisticated take on this fantasy is that it’s childish and escapist, that it posits a past that never existed. And that’s true — Tolkien, who regarded the modern, industrialized world as a hellscape ravened by soulless machines (he hated cars), happily copped to the escapism bit. “Why should a man be scorned if, finding himself in prison, he tries to get out and go home?” he retorted. The “home” both Lewis and Tolkien envisioned had any number of serious flaws by contemporary standards, but what mattered most to the men who embraced it was that it felt like just that: home, a place where they had roots.

Most contemporary Westerners aren’t as traumatized as Lewis and Tolkien were, but we live in a world of far more accelerated change. We adopt and abandon technologies, relocate miles away from the places where we grew up, seek purchase in an unforgiving economic system, realize that we are rapidly transforming the planet into something far less livable. We still have self-appointed prophets who exhort us to embrace and revel in this perpetual revolution, but “disruption” is a buzzword that is rapidly losing its appeal.

Is it any wonder, then, that it isn’t the modernists, those poets of disintegration and speed and fleeting solitary experience, that readers keep returning to, but these fusty holdouts and abstainers, the guys who said, “We’d prefer not to”? Being Christian was just one of their ways of putting on the brakes, and it’s far from obligatory — let alone the central secret to their appeal. None of us gets to live in the Shire, but we haven’t lost our appetite for the kind to stories that are told there. Those stories are still the ones that feel the most like home.

Books C.s. Lewis Editor's Picks J.r.r. Tolkien Science Fiction And Fantasy The Chronicles Of Narnia The Lord Of The Rings