How Bobby Jindal lost everything: A one-time GOP hope, gutted by Grover Norquist worship and his own ambition

The Rhodes scholar seemed bound for big things. Now even Republicans have turned on him -- and his state's a mess 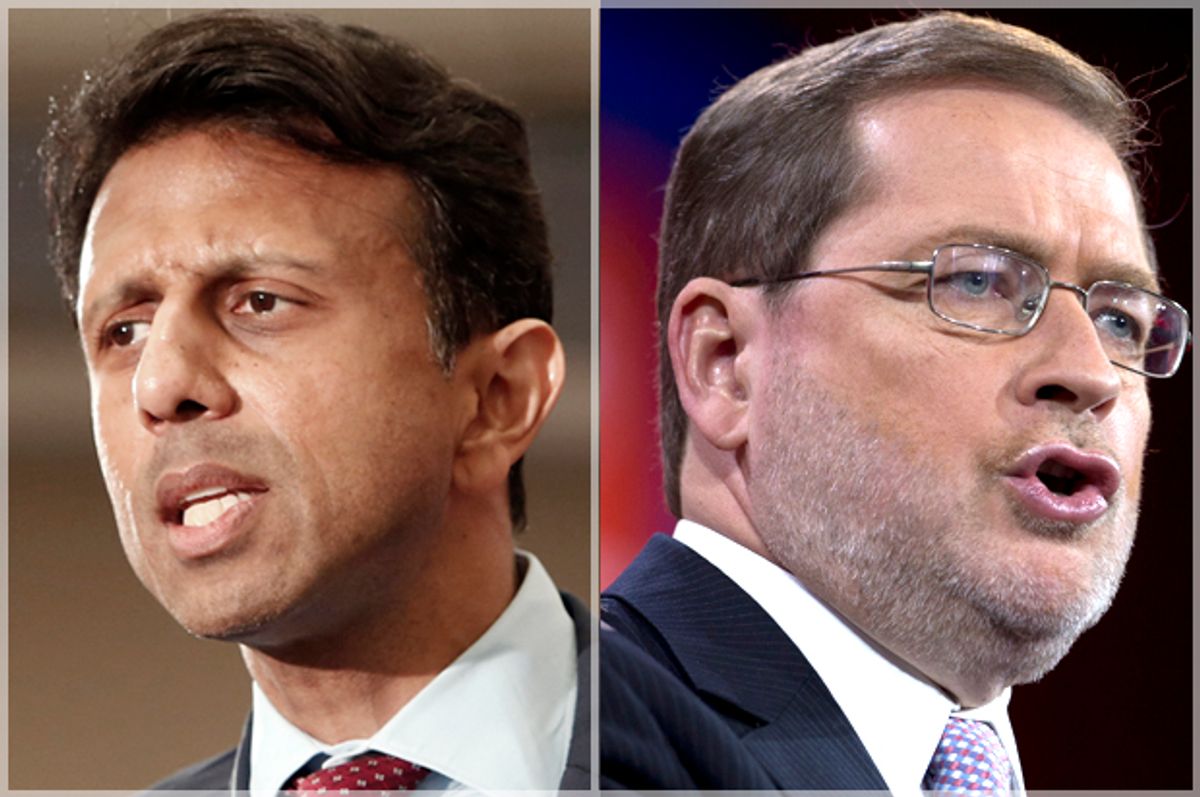 These are not happy times in Baton Rouge, where government officials are desperately trying to plug a $1.6 billion budget shortfall. But even by that standard, Wednesday, April 22, was particularly fraught.

In the imposing state capitol that Huey Long built, the Senate Finance Committee was wrestling with a complicated cost-cutting scheme to repeal an inventory tax that businesses pay to local governments and that the state rebates to the businesses, all while promising to somehow make stressed-out local leaders whole.

Just down the road, Louisiana State University President and Chancellor F. King Alexander said that the state’s flagship university, which could lose 80 percent of state funding after years of already deep cuts, was developing a worst-case scenario plan for financial exigency—basically the academic equivalent of bankruptcy.

In the midst of it all came a message from Republican Governor Bobby Jindal, whose policies and priorities have contributed mightily to the state’s fiscal mess.

“Help wish my friends Willie, Phil and Si a happy birthday,” said the tweet, which was accompanied by a photo of Willie Robertson, whose family is featured on the popular homegrown reality TV show Duck Dynasty. It then directed readers to the website for the American Future Project, a 527 issue advocacy group that Jindal has set up in advance of his anticipated presidential run.

If the tweet suggests a stunning disconnect from the dire budget situation that’s unfolding on his watch, well, that’s how it is these days.

A Pure Record on Taxes

Jindal, a hard-charging former Rhodes Scholar, has always nursed grander ambitions, and voters generally gave him a pass. That was when things were going well.

These days they’re not, and Jindal’s focus on the upcoming presidential primaries has taken a toll back home. While he was popular and powerful enough to avoid a reelection fight in 2011, by 2015 his approval rating had sunk to 27 percent, according to one poll; a friendly survey by his own consulting firm pegged the number at 46 percent, hardly a resounding vote of confidence.

It’s not just his frequent trips to places like Iowa, New Hampshire, and Washington, D.C., that have angered his constituents. (He spent 165 days out of state in 2014, according to The Advocate newspaper.) Nor is it only his odd forays into international and national affairs, from the tall tales in London about Muslim no-go zones, to his op-ed in The New York Times accusing companies that oppose religious freedom laws inspired by the spread of gay marriage of forming an unholy alliance with the “radical liberals.” It’s not even his need to bask in the Robertsons’ reflected glory.

More than any of that, his constituents are frustrated that their governor can’t be bothered to do his day job—and when he does, that his actions are often transparently designed to build a national profile rather than meet Louisiana’s needs.

That’s clear in his refusal to take federal money to expand Medicaid—which, of course, would mean acknowledging there are benefits to Obama’s health care law. But nowhere is it more obvious, or more damaging, than in Jindal’s stewardship of fiscal affairs.

Jindal chalks up the current budget shortfall to the drop in oil prices, and that’s definitely contributed. A larger piece of the puzzle has been his determination to maintain a pure record on taxes.

Jindal hasn’t always been reckless about taxation. In the midst of a budget surplus early in his first term, Jindal tried to quietly head off the Legislature’s move to roll back a big income tax increase that had been enacted several years earlier. It was only after lawmakers seemed like they might eliminate the income tax entirely that he got on board with the rollback, and he soon was boasting that he’d signed the biggest tax cut in state history.

The first real glimpse of the future came in 2011 when Jindal fought tooth and nail against extending a temporary four-cent levy on the state’s cigarette tax—at 36 cents, including the levy, the third lowest in the nation. His reasoning? If the tax rate is scheduled to automatically drop and the state acts to prevent that from happening, it amounts to an effective tax increase.

The stance left his constituents cold, but impressed Grover Norquist of Americans for Tax Reform (ATR), who would endorse Jindal as Mitt Romney’s running mate the following year.

Even Republicans Are Bristling

These days it’s hard to think of anyone who has as much influence over what Jindal’s willing to do than Norquist, whose rigid rules for what constitutes a tax increase line up perfectly with Jindal’s. In practice, that means the governor has insisted that the budget be balanced without tax increases, despite the prospect of devastating cuts to higher education and health care, the two main areas that don’t enjoy constitutional or statutory protection.

And it means some revenue-enhancing ideas the Republican-dominated Legislature might support, specifically a reexamination of giveaways to specific industries, are off limits—because eliminating a tax exemption without an offset that reduces another tax or cuts spending, according to ATR, is raising a tax.

That’s how the inventory tax wound up in everyone’s crosshairs, despite the fact that eliminating the rebate but not the underlying tax would hurt businesses, and getting rid of the tax would devastate some parishes (that’s Louisiana for county). Many companies, it turns out, receive rebate checks that exceed their state tax liability, and in Jindal’s view that makes eliminating the payouts a spending cut, not a tax increase. “Corporate welfare,” he labeled it in his opening address to the Legislature, prompting chuckles from those who’ve watched him promote business incentives for years.

In fact, perhaps the most remarkable aspect of the frustration with Jindal is that it transcends partisanship.

It’s not just the Democrats who are bristling. It’s many a Republican.

Nothing Left to Cut

Republicans who belong to an informal group dubbed the “fiscal hawks” have been sharply critical of Jindal’s reliance over the years on one-time money transfers and accounting gimmicks to balance the budget without making even deeper cuts.

One reason everything’s hitting the fan is there’s not much left. Gone are $800 million from the Medicaid Trust Fund for the Elderly and $450 million for providing development incentives, and the rainy day fund has dropped from $730 million to $460 million on his watch.

Republicans like state Rep. Jay Morris, who, after hearing Jindal’s vow to veto any measure that didn’t have Grover Norquist’s blessing, declared the approach “insane.” And like state Sen. Jack Donahue, who chairs the Finance Committee and who passed a bill last year seeking to determine how much the state spends on tax exemptions, only to watch Jindal veto it.

And perhaps most tellingly, the Republicans running to replace Jindal in this fall’s election. All three—Lt. Governor Jay Dardenne, U.S. Senator David Vitter and Public Service Commissioner (and former Jindal aide) Scott Angelle—say they will look for a way to accept the Medicaid money and take a open-minded approach to examining tax exemptions.

“What this state needs right now is a leader solely focused on Louisiana,” Dardenne said in a recent speech. And in a clear swipe at Norquist, he added that, “I represent the people of Louisiana; I don’t represent someone who lives in D.C.”

And Vitter said he’d take a good, hard look at tax incentives and other giveaways, even if it means raising revenue.

“Gov. Jindal should be doing this now,” he pointedly said. “I’ll do it the minute I’m sworn in.”

This story was originally published by the Washington Spectator