Save us from GOP businessmen! Donald Trump, Carly Fiorina, Mitt Romney and the big lie about big business

W and Hoover wrecked the economy. FDR, Clinton and Obama rescued it. Let's stop pretending we need an MBA president 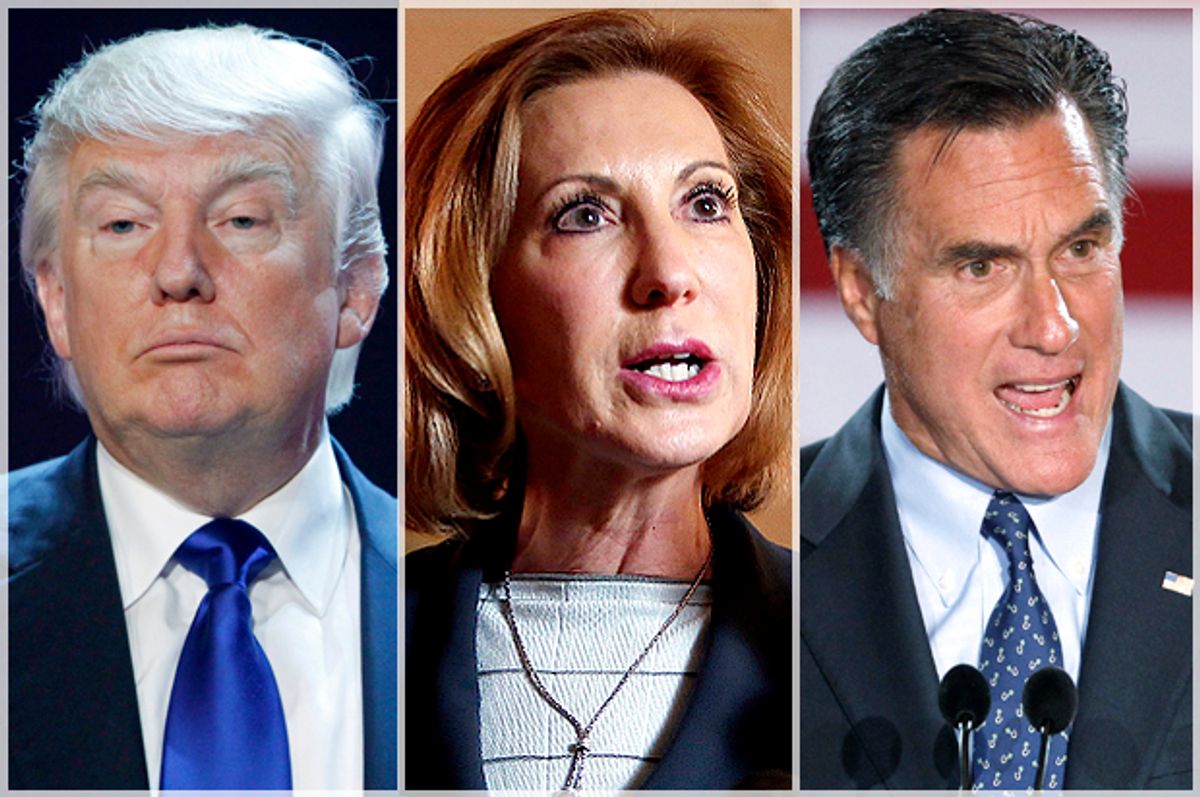 There’s a popular trope on the right which argues that businessmen make good presidents. In addition to being untrue, this view perpetuates a host of misconceptions about government. As the presidential race kicks into gear, it’s worth dismantling this dangerous fallacy.

First, America isn’t a business. Businesses exist to turn a profit, to create wealth for shareholders; that’s their only reason for being. Countries exist to preserve a cultural identity, a way of life, of which the economy is a part. Conservatives often argue that this is an abstract distinction; that, practically speaking, overseeing a corporation and deciding national economic policy are fundamentally the same. The GOP’s last presidential nominee, Mitt Romney, exemplified this line of thinking:

I don’t know if Romney was serious when he said this, but let’s assume he was. In that case, he’s an idiot. As Timothy Egan noted, this immediately rules out several of our most successful presidents, such as Teddy Roosevelt, FDR, Eisenhower, JFK and Bill Clinton – none of these men qualify by Romney’s standards. Neither, incidentally, does Ronald Reagan, a numinous hero for nostalgic conservatives.

More importantly, though, Romney was articulating a kind of truism for Republicans, which is that maximizing profits in the private sector is comparable to managing a prosperous economy. Well, it’s not. Such confusion is born of the belief that the country is, essentially, a corporation. There’s no point in correcting this misconception, as Paul Krugman has already done so. But even if you deny Krugman’s point that economies are more complex and contingent than private companies, and thus operate according to different rules, there are other reasons to not elect a businessman as president.

To begin with, two of the twentieth century’s worst presidents, Herbert Hoover and George W. Bush, were former businessmen; their legacies are the Great Depression and the Iraq War, respectively. Recently, moreover, presidential historians were asked to rank America’s presidents; the results were revealing. Of the top 10, only one, Harry Truman, had any meaningful business experience, and what experience he did have was disastrous. At the bottom of the list, however, are people like Warren Harding, Andrew Johnson, Franklin Pierce and John Tyler, all of whom were successful businessmen. None of this proves definitively that a businessman can’t be a good president, but it’s certainly instructive.

Despite the historical record, Republicans continue to look to the business world for leaders. From Donald Trump to the pizza guy Herman Cain to the private equity vulture Mitt Romney, the GOP is constantly seeking a corporate titan to help rescue the nation. The latest example is Carly Fiorina, the former Hewlett-Packard CEO. Fiorina is the most recent Republican to flaunt her corporate credentials as proof of her political potential. Fiorina, it has to be said, is a punch line; she’ll never be president. But the point is that she’s only welcomed in the GOP on account of her business background (which is actually terrible). And that’s the problem.

Business acumen is a terrible indicator of political ability, and for obvious reasons. Business and politics are separate spheres; they require different skill sets. CEOs are despots; they don’t persuade so much as dictate and they’re more inclined to fire those with whom they disagree. Presidents live in a non-zero-sum context, where cooperation is crucial and consensus is critical. Good presidents also tend to care about different things than successful CEOs. The only metric that matters in private industry is profit; this attracts a certain kind of person and cultivates a certain kind of disposition. There are no rewards for compassion and empathy in the corporate world. But compassion and empathy are precisely what we need in a president.

Recall how mercilessly Obama’s background as a community organizer was mocked by Republicans. Obama was derided as a neophyte with no experience as an executive or a leader. The implication was that helping to organize people was in no way a qualification to be president. Not true at all. Community organizing requires an ability to persuade people, to incite collective action. What could be more useful for a president? But Obama’s community organizing also reflected a concern for justice, for the disadvantaged; Republicans hate that. New Gingrich and others called it un-American, radical and socialist. What they really meant was that Obama cared more about poor people than profits — that’s an unpardonable sin in the GOP and in corporate America.

It can’t be said enough: the president is a public servant, not a private executive; only Republicans are confused about that. America isn’t a business, but the GOP treats it like one. They confuse capitalist virtues with civic virtues and the result is exactly what you’d expect: a government by and for Big Business. Perhaps the next Republican nominee won’t tout his or her business experience as triumphantly as Romney did, but this trope will doubtless reemerge in one form or another on the right. When it does, Democrats should push back. We’ve had enough profit-based policy; such thinking gave us neoliberalism, a global recession, and record inequality. We need a president with a sense of civic virtue, who cares about something other than the bottom line; corporate America is the last place we ought to look for that.