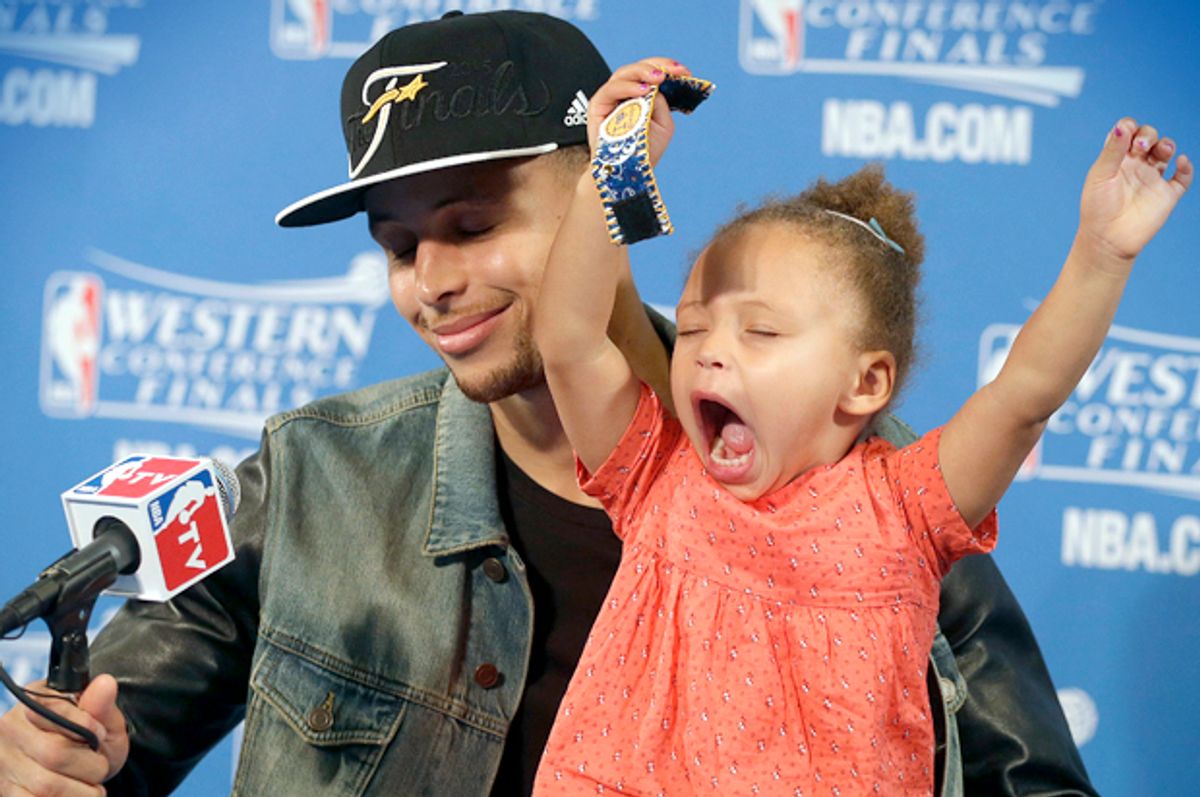 It is hard to explain to casual basketball fans just how astonishing it is that Golden State Warriors point guard Stephen Curry won the NBA’s MVP award this season. The guy is barely six-three and 190 pounds soaking wet. He’s not especially fast or strong. He couldn’t even get recruited to a major college program.

What Curry has done, through sheer dogged determination (and preternatural hand-eye coordination) is to invent entirely new ways to dribble, shoot, and pass a basketball. He’s half baller, half Harry Potter.

But Wednesday, on perhaps the biggest night of his career, Curry was something else equally remarkable: the patient and loving father of a rambunctious toddler.

For those of you who have not been tracking the NBA playoffs, the scene in question took place just after the Warriors beat the Houston Rockets, to punch their ticket to the Finals, where—starting Thursday night—they will face the Cleveland LeBrons, er, Cavaliers.

Having led all scorers with 26 points, Curry was obliged to meet the press. And, for the second time in a week, he brought along his two-year-old, Riley.

As she did in her first appearance before the media, Riley behaved … like a two-year-old. She tried to get her dad’s attention. She mugged for the assembled reporters. She sang into his mic. She played hide-and-go-seek. She handed her gum to a team official.

Predictably, a bunch of sports pundits have raised objections to Curry’s decision to bring his daughter to the podium, a practice that has become increasingly common, especially in the NBA.

“As a member of the media who wants to ask the players about the game in a business setting, it is counterproductive and it sometimes takes away from being able to ask questions,” whined Brian Windhorst, on ESPN’s "First Take."

"First Take" host and professional skeleton Skip Bayless naturally agreed, bleating about the need to “preserve the sanctity” of post-game press conferences, so that “very important quotes” can be reported.

You may now vomit.

For this reason alone, I applaud Stephen Curry.

From the standpoint of a parental scold, I guess you could make an argument that it was too late at night for a kid her age to be up, and that the spotlight might have overstimulated her. But Stephen Curry himself grew up with a dad who was an NBA star. He was often surrounded by such hoopla as a kid. His wife, child, and parents come to pretty much every Warriors game. It’s how their family operates, and I’m reluctant to question their judgment.

To be sure, there are situations in which famous people clearly seek to advance their agenda by cynically parading their children in front of the media.

But there’s really nothing Stephen Curry had to “gain” by sharing the spotlight with Riley. He’s already the reigning MVP. He makes more in endorsement deals than he’ll ever be able to spend. Any success he enjoys in his career will be a product of his physical gifts and his indomitable work ethic, not his press clippings.

Besides which, what clearly emerges if you watch the press conferences is how incredibly attuned Curry is to his daughter. He’s patient and loving without being indulgent. He pulls her onto his lap when she needs it, and lets her roam when she can’t contain herself. He gives her positive attention when called for, but doesn’t allow her to stop him from answering the questions he needs to answer. As the father of three, including a toddler, I was blown away by his skills.

Yes, sure, it’s only a brief clip. But Curry struck me as a fine example for those of us who struggle daily to balance our desire to be with our children (and share our world with them) against the need to, you know, get adult shit done.

Watching Curry tend to his daughter with such poise actually helped put the larger situation into perspective.

I mean by this that what really and truly matters in Stephen Curry’s life isn’t feeding reporters a bunch of stale quotes for them to regurgitate to fans like me. What matters is that he’s a father who cherishes his daughter and who (after a long night at work) wanted to spend time with her, even if that meant exposing her to the absurd mock gravitas of a post-game media scrum.

The ultimate message Curry was sending is that parenting—unlike being a sports hero—isn’t a performance. It’s a full-time job. After all, Curry could have easily hired a nanny. Or asked his wife to take Riley while he took questions. But it’s clear that Riley (as a natural extrovert) wanted to be with her dad.

In this sense, what Curry did, in a small but vital way, was to take parenting out of the shadows. And that matters a great deal, because—as any parent will tell you—most of the hard work of raising kids goes on behind the scenes, with no witnesses, let alone cameras.

Because this work is kept out sight, as a society, we tend to downplay or even denigrate parenting—especially the work of stay-at-home moms and dads.

This is much of the reason the United States has such a disgraceful legislative record when it comes to laws designed to support parents, especially compared with most European countries. We expect moms and dads to work a “real job” in public, and ignore the fact that they have another real job at home.

Curry’s decision feels especially apt given the NBA’s longstanding reputation as a haven for deadbeat dads. Because of our abject worship of male professional athletes, we tend to judge them by a set of standards that are profoundly myopic.

Not surprisingly, these athletes often live lives of protracted adolescence, in which their feats of derring do earn them the right to father many children without actually doing much fathering.

Amid all the righteous blather we hear about athletes as “role models” it seems curious, then, that we wouldn’t praise an athlete for being an attentive parent in such a public way.

Think, for a moment, about the impact Curry’s presser might have on all the men (and women) who admire him. On the young players trying to figure out whether it’s possible to be a committed father and a world-class athlete. On all the absentee dads who’ve turned away from their paternal obligations. And on guys like me, who need a reminder that being a dad and having a career is inconvenient, but not impossible.

After all, the basic reason Riley Curry seemed so “out of place” at that podium is because our culture treats sports as a kind of patriarchal refuge, a place where men can go that is designated as largely off-limits to women and children.

In my own life, I have spent thousands of hours rooting for one team or another. Fandom can be a beautiful form of devotion, a means of connecting to other fans, and even to our own kids. (Over the course of this season, for instance, my daughter Josie has become an insane Warriors fan.)

But if I’m being brutally honest, far more often my allegiance to sports has turned me away from my wife and children. It has allowed me to retreat into a kind of regressed thinking in which all that matters is who won the game.

Surely the more important question in the life of any fan is how well we love our children.

This, I suspect, is the real reason those sports reporters were so bent out of shape by Riley’s appearance: because it underlined the fact that what they’re doing isn’t, in the grand scheme of things, deeply meaningful.

The real question we should be asking as a culture is why Stephen Curry’s ability to perform brilliant feats with a leather ball matters so much to us, while his role as a father matters so little.