Like Cumberbatch as Khan and ScarJo in "Ghost in the Shell," Emma Stone isn't Asian, just playing one on film 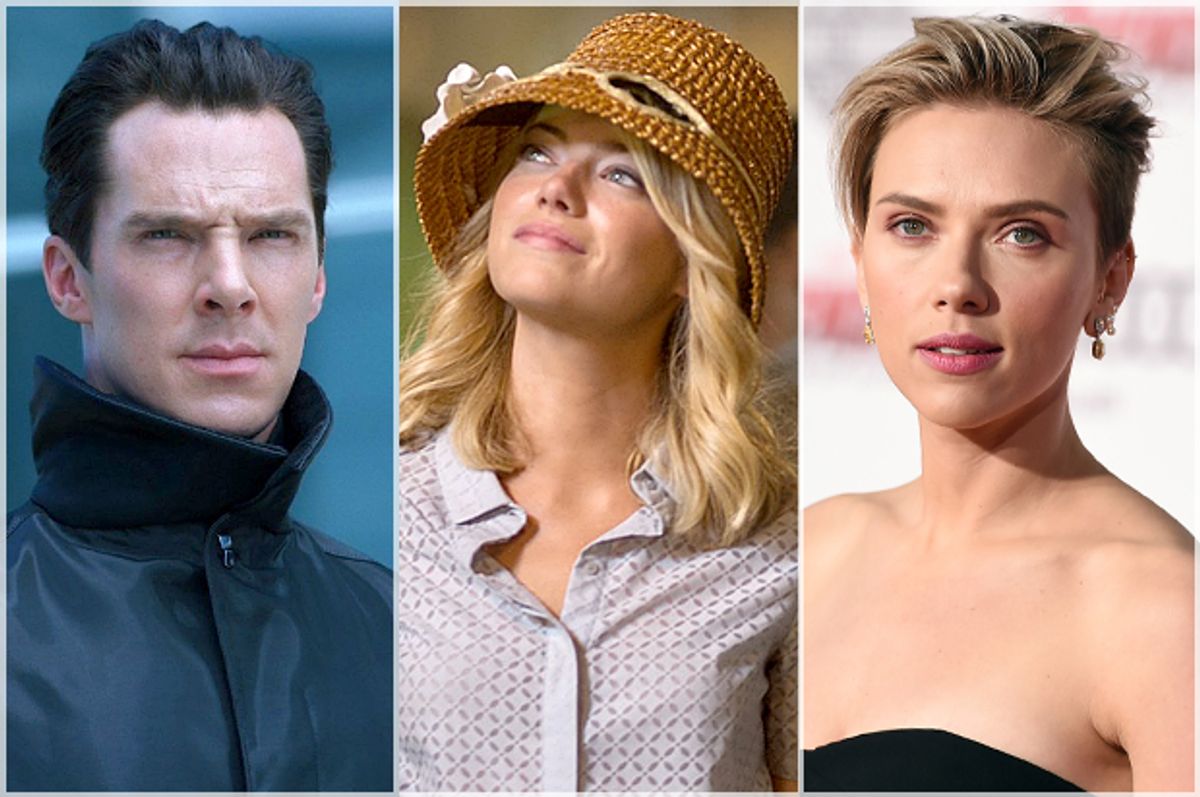 During the ‘00s – the aughts -- it used to be that blockbuster summer films popped an Asian guy into its cast (“we ought to have an Asian guy”) and made sure he was dead before the final credits. (“We ought to have a Meaningful Death here. Let’s kill him off!”) I called this guy the Expendable Asian Crewmember, in reference to the security officer in the ‘60s television version of "Star Trek," the red-shirted extra fans referred to as the “Expendable Crewmember” because he was sure to get phasered into oblivion after beaming down onto the hostile planet. Now that we’re halfway through the teen years of our 21st century, Hollywood has developed a kinder, gentler way of making sure that only white heroes are left standing by the end: it tells you the character is Asian, but casts a blindingly white actor to play him/her/them.

Apparently, when film producers are presented with the problem of casting a bankable Asian male, the first actor that springs to mind is Benedict Cumberbatch. When he is unavailable, the next best option is ... Tilda Swinton? A woman who did a very good job playing an archangel named Gabriel and even better job playing a vampire  is now in talks to play a male Tibetan mystic to round out her “androgynous immortal” portfolio.

This latest batch of white actors playing Asian characters is different from the (formerly heinous, insultingly clumsy) attempts at yellowface, blackface, and redface that used to plague Hollywood, because no attempt has been made to change the appearance of their features. The history of the most racist yellowface castings is well-trodden ground: Mickey Rooney as a Japanese neighbor, Marlon Brando as a Japanese interpreter, John Wayne as Genghis Khan — that kind of obvious yellowface makes Millennial eyeballs burn from the cinematic Sriracha being squirted into them. Nowadays, pancake makeup and cheap prosthetics are far too crude. Today's sophisticated viewers are postmodern, and the burn is far more subtle. Polite people are not supposed to notice that the radiant white actor playing a person of color is, in fact, not a person of color. And if you do notice? Well, making a big deal out that actor’s blonde whiteness means you’re bigot. (Heck, you might even be a thug.) If Tilda tells you earnestly that she is playing an Asian male and you respond in confusion, “You don’t look Tibetan,” then you’re the troll unable to accept all forms of identity, race and gender included, as a cri de coeur of self-determination.

In its own weird way, this casting strategy performs a brilliant sleight-of-hand, allowing “diversity” to be trumpeted while hiring no minority actors whatsoever! (Well, maybe just a few. There are sidekicks, but never leads. It’s a drinking game to find them.) Certain re-casting disasters have become well known. "Avatar: The Last Airbender" and "Dragonball: Evolution" spring to mind. Yet the substitutions not only keep on happening, but the white actors now being cast to play Asian roles are not just white but often posh Anglo, too, as if to reaffirm super-whiteness by bypassing the commoner soup springing from the loins of the unwashed American masses.

A look at some recent and upcoming examples:

"Aloha," 2015. Putting aside the fact that this film tells you it’s taking place in Hawai’i but is actually set in the same Wonder-bread universe where too much "Sex and the City" spawned “Girls” and "Boyhood," "Aloha" asks you to believe that Emma Stone – sweet, sparkly, Maybelline Emma -- is “one-quarter Chinese, one-quarter Hawaiian, and one-quarter Swedish, making 'Aloha' the first major studio movie to explain to white folks how you pronounce the name “Ng” (like ‘ring,’ without the R).” Well. That’s, like, totally mean. Who are you to say that Emma Stone couldn’t have a bio Chinese dad even though blonde hair and green eyes are recessive traits and did it never occur to you that she could be bleaching her hair and wearing contact lenses to fit in with white kids making fun of her for being Hapa? Your racist attitude is just like what happens to adopted kids being asked who their “real” parents are. Umm, yeah. Emma Stone as a fighter jet pilot Asian chick is verging into the parodic territory of Steve Martin playing Navin Johnson, the banjo-playing son of “poor black sharecroppers” in "The Jerk." Unfortunately, "Aloha" isn’t supposed to be a comedy.

"Star Trek into Darkness," 2013. In the original televised episode, “Space Seed,” from “Star Trek,” 1967, Khan Noonien Singh is a genetically-enhanced superman whose family name (Singh) indicates he is Sikh, whereas his title (Khan), invokes Genghis Khan, who was Mongol. Although the precise ethnic mixtures are endlessly debatable, the character was definitely Asian. Ricardo (“Mr. Roarke”) Montalbán played him on the televised episode as well as in "Star Trek II: The Wrath of Khan," which was a bit weird but plausible because Khan was always supposed to be a genetic mixture of the best of Europe and Asia. Then came "Star Trek into Darkness," beginning Benedict Cumberbatch’s reign. Now running around the future as “John Harrison,” Khan Noonien Singh is (like Gustav Graves, see "Die Another Day" below) fully good-White on the outside but bad-Asian on the inside. According to the co-screenwriter, Benedict was cast in order to avoid “demonizing” people of color. ("That logic is…illogical," I say, in my best Mr. Spock voice.)

"Die Another Day," 2002. This James Bond film pits 007 against North Koreans who literally morph into white guys. Their characters are so white that one North Korean/Chinese villain has diamond whiteheads sprouting on his bleached face as he dreams electric dreams in German, a language that he hopes his genetically altered, blue-eyed features will soon match in Aryan perfection. Naturally, the head villain’s lair is an ice palace in snowy Iceland. Played by British actor Toby Stephens, the villain, “Gustav Graves,” is so British that he gets knighted by the Queen, takes fencing lessons from fake-British-accent Madonna, and his trophy British girlfriend is lady named “Frost.” But inside, Graves is really, truly North Korean and hell bent on destroying all things good and British using his ill-gotten billions. When he appears for two minutes as his authentic, pre-op self, he’s played by Will Yun Lee, a Korean-American actor.

Another possible entry: "Doctor Strange," in production. I will admit this one is idiosyncratic, but when I was a little kid, I always assumed that Doctor Strange was Asian, same as Mr. Spock. In any case, Cumberbatch has been cast to play the good doctor and will doubtless remain fully himself, i.e. Sherlock Holmes/Alan Turing/British guy supreme, while playing the most powerful master of Eastern mysticism who ever lived. Doctor Strange is so strange there’s multiple versions of the character, so it’s hard to argue with that casting. It’s his mentor, Yao the Ancient One, who just might affirm the peculiar practice of White Actor playing Asian Guy. This practice has become so acceptable (read: profitable) that it even trumps Hollywood misogyny, with Tilda Swinton in talks to star as Doctor Strange’s Tibetan male mentor. Yay for Tilda, if it is so! Sad face for Asian actors everywhere.

All of this raises the question: are there really no Asian actors capable of playing Asian characters? Let’s see. Jackie Chan, Gong Li, Maggie Q, Sandra Oh, Lucy Liu, and, oh yeah, Keanu Reeves (who in real life has a Hawai’ian/Chinese/Portuguese dad) are already household names with considerable star power and semi-obvious to be cast playing Asian roles. I mean, who wouldn’t want to see Neo playing Yao? Arguably, there are lots of established Asian and Asian-American actors whose careers are ripe for megastardom. Some, like Rain, are already huge box office draws unknown to all but American audiences. Daniel (“Agent Zero”) Henney, one of the hottest guys on the planet, could easily hold the lead playing an international spy or mysterious assassin, but it really doesn’t matter as long as women get to stare at his stubble. Min-Sik Choi is instantly recognizable as the weary protagonist of "Oldboy," a 2003 cult film so influential that Spike Lee remade it in 2013 with a white lead (it bombed). Choi would be perfect for any action flick calling for gravitas combined with murderous efficiency in the manner of Liam (“I-have-a-very-particular-set-of- skills”) Neeson. Daniel Dae Kim, that Korean guy from “Lost,” now co-starring on “Hawaii Five- O,” practically has a blinking billboard over his head saying CAST ME AS A SUPERHERO. John Cho wants to be the next Bruce Wayne/Batman. He ought to be.

In other words, when Benedict and Tilda get to play everyone — men, women, aliens, angels, Asians — it’s not so much an affirmation of their considerable charisma and acting skills, but confirmation that the entertainment business is giving a big fat F-U to large chunks of talented artists who happen to belong to the wrong ethnic group. The trouble is that films are also cultural mirrors of our collective psyches, and acting is a particular kind of job. When whole swaths of moviegoers don’t see themselves in the stars dangling before their eyes, that’s a problem of self-reflection in the making.

In concrete terms, when certain actors aren’t given starring roles, they don’t eat. It's mighty peculiar when talented professionals aren't hired because having the right looks and all the moves means they are wrong for the part. Hollywood is a brutal business for everyone, but it's hard to overlook the fact that this planet is very hostile to Asian actors, who are getting bloodlessly blasted into oblivion with every mission to explore strange new worlds. What about all that money being made? Hollywood will tell you that it's all a number's game; they'll start casting nonwhite actors when audiences line up to see them. For the time being, today’s audiences seem content with being taken for a ride, just as long as they get snack food and really good air conditioning. Just like the Starship Enterprise.