AMERICA SURVIVES with Joanna Rothkopf pt. 4: How to survive a parachute malfunction 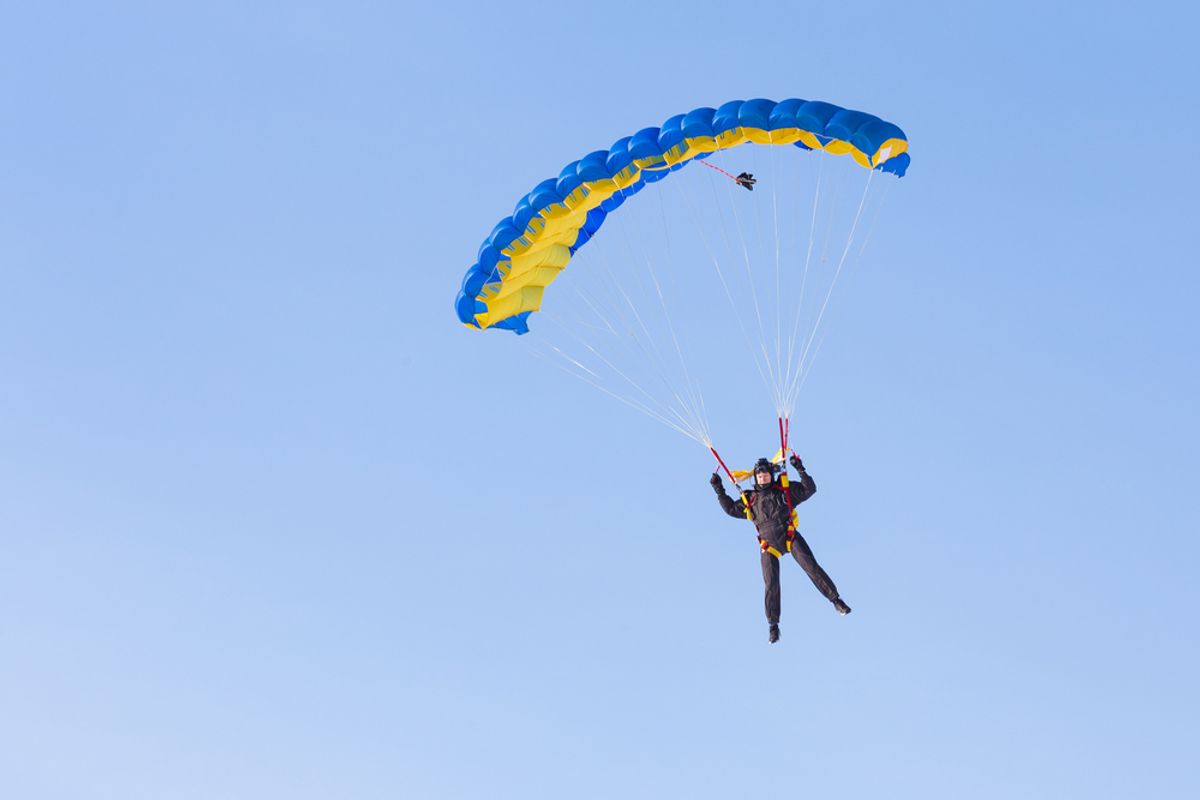 Sometimes, when we are reverse psychologizing the Grim Reaper, our man-made safety nets fail. But, as I said, we are Americans and we are stronger than physics and an idiot piece of fabric should not be the deciding factor in whether we live or die. We are the ones who knock (on death's door, get it?).

That said, here is how to survive after jumping out of a plane and realizing your parachute has malfunctioned:

Let's say you have just hopped out of your private jet airplane and are descending into an upstate New York corn field designed for catching people. You pull the cord triggering the parachute's release and nothing happens. The first thing you must do is stay calm. I know, I know, Americans don't know how to stay calm. I will deal with "how to stay calm" in a future column.

It is very hard to stay calm when it seems like your chute has failed. Mikey Holmes, a skydiver who actually survived a fall without any chute at all said in an interview with Esquire:  "It was like something had a hold of me from my lower back and I was being twirled from that point. The more I tried to get on my back, the faster I would spin. My arms, legs, and head felt like they were being pulled away from me."

The second thing you must do is figure out what exactly is the problem: is your parachute a crumpled ball of cloth that will never turn into anything? (WikiHow tells me that this is a thing that can happen.) Or are your wires tangled up? If your wires are tangled up, you can just untangle them. Congrats, you've survived!

But if your wires aren't tangled, you're going to have to cut away your main chute and deploy the reserve chute (unless you are under 1,000 feet away from the ground, in which case say screw it to the first step and just deploy your reserve chute). To detach the main chute, grab the cutaway handle which is usually located on the right side of your chest, then, grab you reserve parachute deployment handle located on the left side of your chest (usually). Arch your back, pull the cutaway handle and then pull the reserve handle with all your sturdy American strength!

Also, remember, you should only be in free fall for around 90 seconds before opening your chute -- once you open it, it'll take up to 7 minutes to reach the ground. If your chute fails, however, you can assume you'll reach the ground much, much more quickly. According to one account, it will only take 30 seconds to hit earth.

If you are reasonably lucky, the chute will deploy. If it doesn't deploy, you need to find a fellow jumper and link your arms through his/her harness before he/she deploys. When your fellow diver finally does deploy his/her chute, the g-forces will send you spinning around and will make it very hard to hold on, but, like, you have to.

If there is no one diving with you, there is nothing left to do except suddenly become religious and pray, attempt to solve a very hard math problem and shout the results into your video camera in hopes your existence should not end up fruitless, or try really belting out a song from Wicked the musical because no one can hear you and those are ideal conditions for belting.

Holmes is a rare example of someone who actually survived with both chutes failing.

But he didn't die. He landed in a blackberry bush, the impact of which immediately knocked him out. He made it out of the ordeal with a collapsed and punctured lung, a broken ankle and swelling pretty much everywhere.

"There wasn't really terror," Holmes said of the moments before he hit the ground. "It was more just helplessness. It's like if you were driving  a car, and you went into a tunnel, and it was a dead end. Then your brakes failed. What are you going to do? There's nothing left to do besides brace yourself for impact and possible death."