"Condescending Hillary": Wingnuts come up with their dumbest 2016 "controversy" yet

A right-wing PAC manufactured a Hillary "gaffe" on social media, and it went viral because politics is terrible 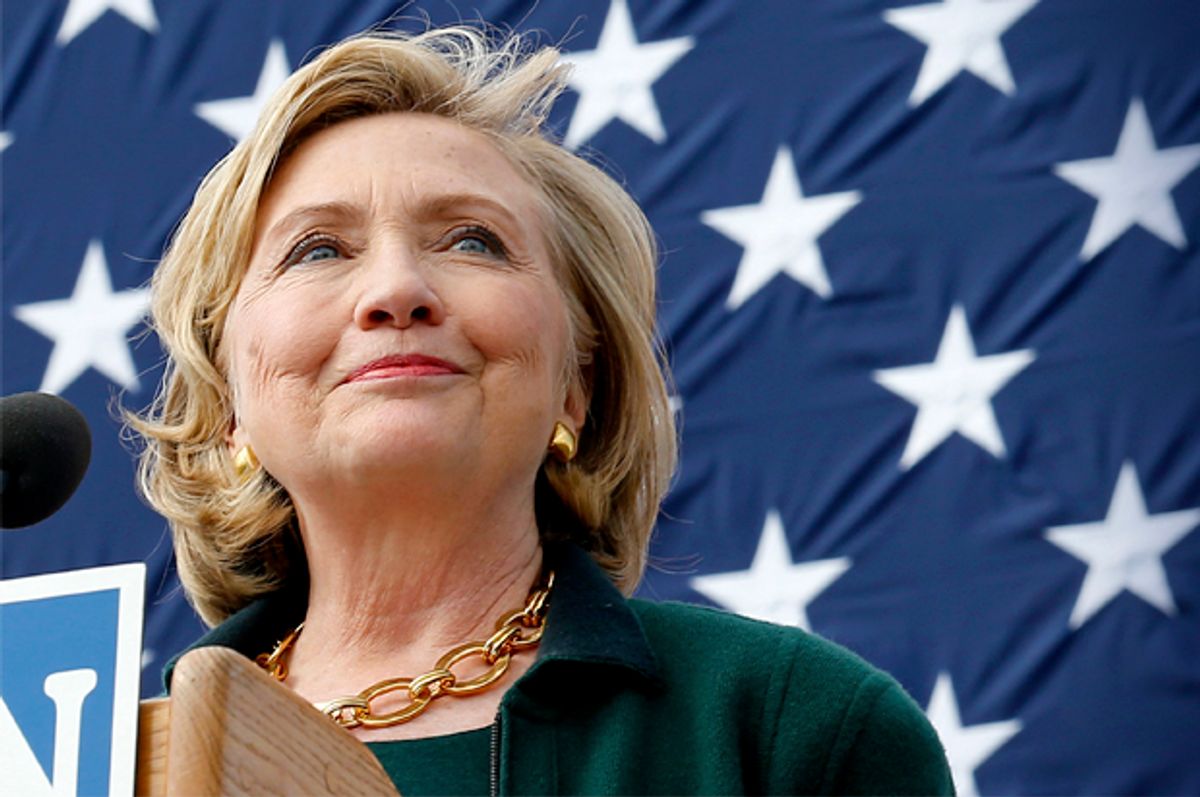 We are, sadly, now in the age of the opposition-research Vine. For those of you who don't waste the precious and irreplaceable moments of your lives on social media, Vine is a service that lets you create short videos – six seconds, maximum – that loop indefinitely, which can then be posted on Twitter. The very nature of Vine makes it perhaps the worst possible medium through which one can cover a political campaign: it allows no room for context as it repeats the same short burst of information over and over. These same qualities, however, make it very attractive to opposition research groups and the campaigns themselves, who rarely give a damn about context as they pursue strict message discipline.

That brings us to America Rising, a conservative political action committee that sends trackers to follow Hillary Clinton and record her every movement and utterance. Yesterday a staffer for the group tweeted a “painful” Vine of Hillary talking with a group supporters. One of them asks for an autograph, and Hillary says to her: “Go to the end of the line, why don’t you go to the end of the line.” The same America Rising staffer tweeted out the Vine again explaining that Hillary “says it like 5 more times after in her condescending tone, couldn't fit it all in.”

Now, here’s where the red flags start springing up and the sirens start blaring. America Rising is telling us it “couldn’t fit it all in” as if it had no choice but to distribute this information using a medium that puts a hard six-second limit on videos. The group chose this medium precisely because Vine doesn’t allow for more information or any context whatsoever. America Rising has a message it wants to promulgate – Hillary Clinton is “condescending” – and a short, looping video of the candidate telling a supporter to “go to the end of the line,” in its view, helps reinforce that message.

But, of course, there’s more to the story than can be conveyed by a six-second video. Townhall’s Guy Benson asked America Rising for the full video of Hillary working the line of supporters, and – surprise, surprise – “the added context casts the awkward exchange in a far less damaging light.” As Benson describes it, when people started asking Clinton to autograph their books and baseballs and stuff, Hillary “seems to make a snap decision that she'll accommodate their requests, but not until she's made it all the way through the crowd.” And I’m not entirely sure what was supposed to be “condescending” about Hillary’s interaction with that voter anyway – she asked just asked her to wait her turn.

So America Rising’s Vine is, by all indications, a sloppy and transparent attempt to manufacture a Hillary “gaffe.” As you would expect in such a situation, the conservative media went completely bonkers for it. “Queen Hillary To Adoring Subject: ‘Go To The End Of The Line,” read the headline at the Daily Caller. “Condescending Hillary Clinton tells autograph-seeker to 'go to the back of the line' on campaign trail in New Hampshire,” blared the Daily Mail, with the hilariously forced sub-hed: “Repeatedly told supporter to go to go to back of line in blunt tone.” And, my personal favorite, from the always entertaining Fox Nation: “’Go To The End Of The Line,’ Hillary Tells American.” How dare you, Hillary. Being an AMERICAN means never having to go to the end of a line.

Even the less derpy conservative news outlets strained to turn America Rising’s Vine into a real and genuine problem for Hillary. Hot Air’s Ed Morrisey was skeptical of the idea that it showed Hillary was “condescending” or “haughty,” but "it’s still Amateur Hour nonetheless. Where were Hillary’s campaign aides? It’s their job to deal with this precisely because a campaign wants to avoid this kind of moment at all costs.” Up to this point the conservative media – and the political media in general – have been lambasting Hillary’s campaign for its scripted and carefully coordinated interactions with voters. But the split second she comes into live contact with a regular person, her campaign gets blasted as “amateurs” for not carefully coordinating her interactions with voters.

Unfortunately, garbage like the America Rising Vine is what we have to deal with now that campaigns and the organizations that orbit them are constantly looking to isolate and amplify “gaffes” that can dominate a news cycle. Those “gaffes” rarely, if ever, have an impact on the actual race, but they’re easy to cover and capably fill the cable news content hole, which means we tend to hear about them a lot even though they're essentially meaningless. Barack Obama said “you didn’t build that,” Mitt Romney said he likes to fire people, and now Hillary cruelly banished an innocent voter to the gulag at the end of the line. We're only a few months into the 2016 cycle, so brace yourselves for much more of this nonsense.