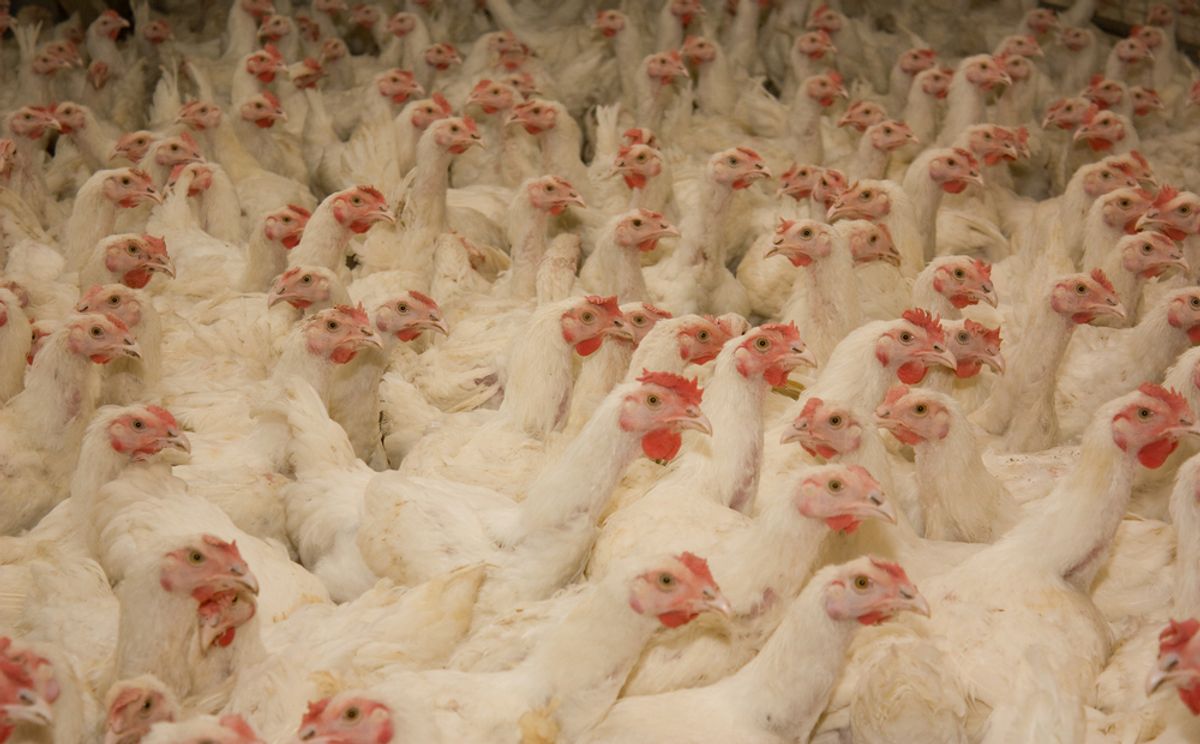 Speaking of the urgent need for Congress to start regulating the way Big Poultry does business, reporter Christopher Leonard is out with a fascinating, horrific piece for Bloomberg Business that brings new insight into the toll the industry's tournament system is having on contract farmers.

It involves the country's second-largest poultry company, a corporate policy that pits farmers against one another, and hundreds of thousands of dead chickens, killed by someone who "had to have inside knowledge" of poultry farms.

The murders took place over the course of a week across Clarendon County, South Carolina. Someone was going from farm to farm, sabotaging the control systems of chicken houses to disable the fans, and therefore killing all of the birds inside. By the spree's end, 320,000 birds had died. They were worth about $1.7 million to Pilgrim's Pride, the company that owned the chickens, but -- as a consequence of the way Pilgrim's contracts out its chicks -- their loss was potentially ruinous to the farmers targeted.

“We knew from the start that it had to be somebody that was disgruntled, mad, upset with Pilgrim’s,” Sheriff Randy Garrett recalled of the investigation. And sure enough, the man they ended up arresting, a farmer named James Lowery, fit the bill: he'd lost his contract with Pilgrim's, a situation akin to getting fired.

Lowry's yet to be indicted in the killings, and it appears that he lost his contract with Pilgrim's because he was neglecting his chickens to the point of abuse. But the case, Garrett speculates, suggests the tournament system could have contributed to the killing spree. Here's Leonard's quick overview of that system works:

The tournament, like so much in the chicken business, is controlled by the integrators. When a group of farms delivers birds to a Pilgrim’s slaughterhouse, the company gathers them into a tournament pool. Then it tallies how fat each farmer’s birds got and how much feed the animals ate. Pilgrim’s crunches those numbers to arrive at a figure that measures “feed conversion,” or how much weight the birds were able to gain based on the feed rations Pilgrim’s provided. The company ranks each farm’s feed conversion against the others. Farmers who rank at the top get a bonus; farmers at the bottom get a pay cut.

The farmers, however, don’t control the main factors that determine success in the tournament, which are the health of the baby chicks and the quality of feed the integrator delivers. For this reason, the tournament feels more like a lottery, with farmers praying for healthy birds. And it’s a zero-sum game: The bonus for the top farmer is taken from the paycheck of the bottom one. The feed conversion gap between top- and bottom-performing farms is often small, but the penalty can be large. A recent tournament sheet for a Pilgrim’s farmer in the Sumter area shows a difference in feed conversion between the top and bottom farm of just 3.6 percent, but the pay difference between them was 10.2 percent. Placing at the top or the bottom of the tournament can mean the difference between profit and bankruptcy.

It's a problem, in other words, created from the top. But it's experienced differently by the farmers, who are set up to see one another as the competition. Leonard puts it this way: if you get a bonus, it means your neighbor's getting a pay cut. And regardless of how it plays out, Big Poultry always ends up on top.