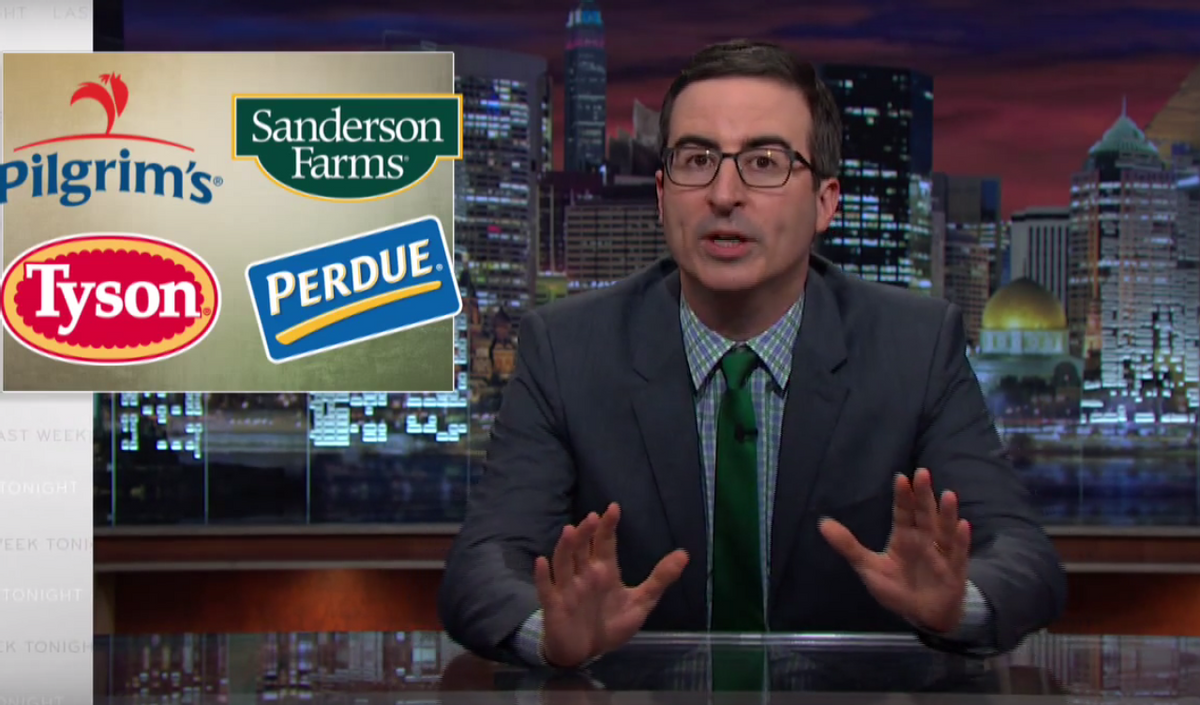 The other night over dinner, a friend told me she was thinking about cutting chicken out of her diet.

"Oh," I replied right away. "So you saw the John Oliver clip."

John Oliver is far from the first person to call out the messed-up system through which America's giant, consolidated poultry companies are able to exploit their contract farmers -- Christopher Leonard published a must-read exposé on the topic last year; Craig Watts, a farmer whose story was referenced in Oliver's segment, risked his career by speaking out against Perdue -- but he's the master at reaching people who might not otherwise hear about issues like these.

Just the fact that more people may be thinking about where their meat comes from could definitely count as a victory. But according to Politico, some are hoping that the attention Oliver's brought to the plight of chicken farmers may result in actual reform. The idea, explains reporter Nathaniel Haas, is that the anticipated public pressure could help end the Congressional stalemate over adding USDA grower protections, also known as GIPSA (Grain Inspection, Packers and Stockyards Administration) changes, to the 2008 farm bill -- a process Oliver exposed as being stymied by poultry industry lobbying.

At the very least, the industry’s next attacks on the department might meet a chillier reception in Congress, Rep. Chellie Pingree (D-Maine) said. “Last time we had a vote on it, we only lost by about six votes,” she said. “If it comes up for a vote in the committee, we’ll be more likely to prevail.”

Rep. Marcy Kaptur, an Ohio Democrat who has challenged the way the poultry industry treats its growers, also believes the HBO show could make a dent on future policy. “We’ve never had publicity like this in the 16 years I’ve been working on this issue,” she said.

...Both lawmakers believe Oliver’s show has given them a fighting chance of beating back the GIPSA rider.

“I think it is perhaps the single best opportunity the U.S. livestock and poultry sector has had in many, many years to show how the meat packers are exploiting U.S. farmers and ranchers, and how they are capturing from them the livestock and poultry supply chains through vertical integration,” said Bullard, whose group represents close to 5,000 U.S. cattle ranchers.

Oliver's crusade is coming only after years of inaction, meaning the agency probably wouldn't be able to move forward with its original 2010 proposal. “We would have to start over entirely with the rule-making process, in essence, because the previous legislation rescinded and struck down a lot of what was already done," explained USDA spokesperson Cullen Schwartz. "Rules that were previously proposed were halted -- and, at this point, they’re years old." But now, while Americans are still looking, is a great time to get the ball rolling.