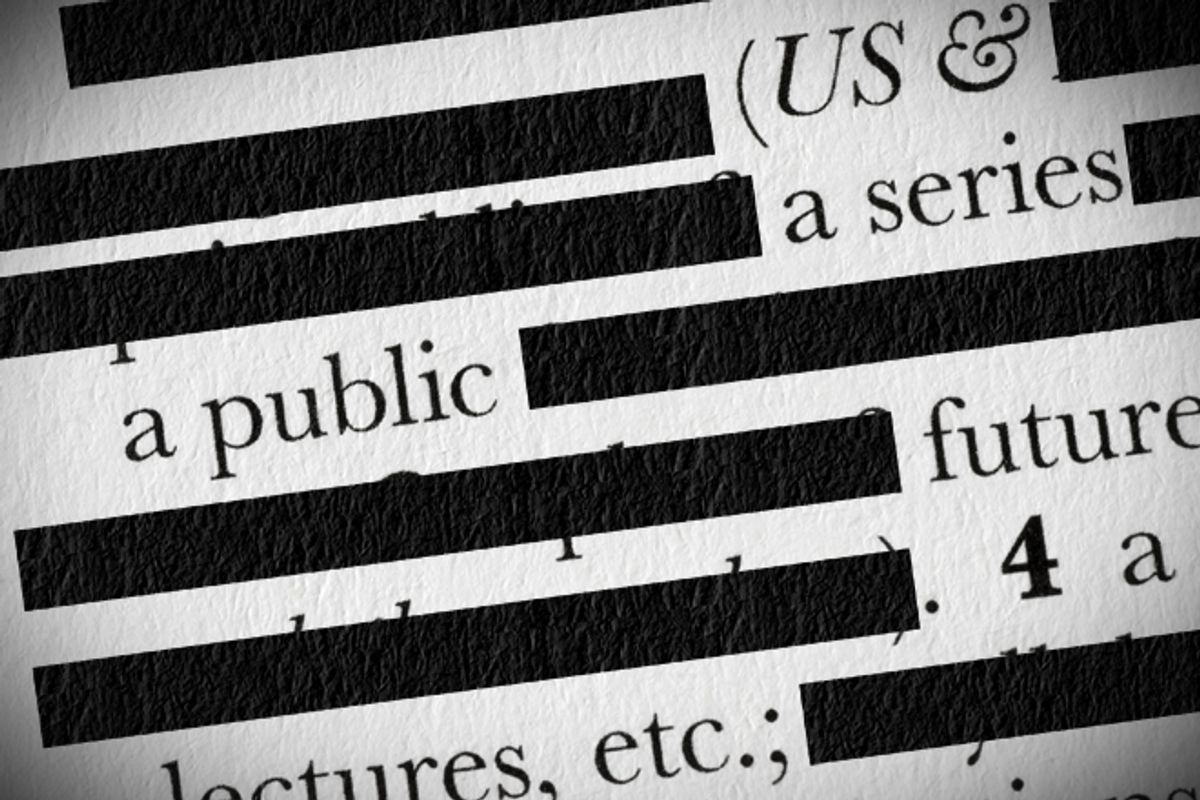 The House Committee on Oversight and Government Reform is holding hearings this week called “Ensuring Transparency through the Freedom of Information Act.”

Now, before you doze off from reading that sentence, let me rephrase it: The House Oversight Committee is holding hearings on a law that delivers info on drones, the force-feeding of prisoners at Guantanamo Bay, grenade launchers delivered to small-town cops, and a nearly endless variety of other matters that federal agencies won't voluntarily tell us about. If you’re curious about the 55,000 pages of emails Hillary Clinton sent while she was Secretary of State, you’re interested in FOIA. If you want to know why it took so long for veterans to get answers about the mysterious, possibly-cancer-inducing barrels they handled while deployed in Iraq, you’re interested in FOIA.

In short, if you’re interested in American democracy, you’re interested in FOIA. And -- spoiler alert -- the House Oversight hearings are not going to be a celebration. Invitations to the hearings reported how Fiscal Year 2014 was a record-breaking year for FOIA failure: “Agencies processed fewer requests, invoked exemptions more often, spent more federal dollars on FOIA processing and litigation, and experienced an increase in the backlog of FOIA requests of 55 percent.” This is scary news considering that, as the U.S. becomes more of a surveillance state, FOIA is one of the few ways citizens can turn the microscope back on Uncle Sam.

Let’s rewind for a second.

The Freedom of Information Act was signed by President Lyndon Johnson on July 4, 1966. As the Associated Press reported at the time, “The law provides that any citizen may see any government document in the files – but lists nine categories of material that are exempt from this stipulation. These range from defense secrets to interagency memos to files that, if made public, would invade an individual’s privacy.” In other words, Congress and LBJ established a mechanism that compels agencies to answer citizens’ questions, unless they have a damn good reason not to.

If it sounds like this would have big implications, it did. George Washington University’s National Security Archive -- which boasts of having filed more than 50,000 FOIA/declassification requests and 50 FOIA lawsuits since 1985 -- has pages full of news stories based off FOIA requests: "Anthrax Slip-Ups Raise Fears About Planned Biolabs," from USA Today; "More Army Recruits Have Records: Number Allowed in With Misdemeanors More than Doubles," from the Chicago Sun Times; “FBI Keeps Watch on Activists," from the L.A. Times; and on and on.

There’s a good reason journalists talk about FOIA with religious reverence. And there’s an equally good reason why, given the Obama administration’s abysmal FOIA performance, those same reporters mock the president’s claim of being “most transparent administration in history.”

As the FOIA nears middle age -- it turns 50 next year -- the law’s wrinkles are showing. Although President Obama issued a memo on his first day in office encouraging a “presumption in favor of disclosure,” requesters are routinely pestered by delays, denials, unreasonable redactions, and excessive fees. The U.S. Navy’s recent accidental release of plans to thwart a reporter’s FOIA request was a microcosm of the entire system. These problems are widespread and widely acknowledged, and yet last year’s bill to strengthen FOIA was “defeated at the 11th hour by Wall Street lobbyists and a speaker of the House using a technical ploy,” as the New York Times described.

Before I go any further, I should disclose that I’m currently suing the Department of Justice for its handling of a FOIA request I filed in February of 2012. And when House Oversight recently put out an open call for FOIA feedback, I submitted a three-page letter describing the events that followed as “the single most disillusioning experience of my life.”

My request was simple and straightforward: Months after a federal jury in Cincinnati convicted Dr. Paul Volkman, a man the DOJ calls the “largest physician dispenser of oxycodone in the U.S. from 2003-2005,” I asked to see the evidence shown during his eight-week trial. (Volkman went to college and med school with my father, and I’m working on a book about his case.) After acknowledging my request, the Executive Office for U.S. Attorneys sat on it for nine months, charged me a $154 “review fee,” then transferred it to the Drug Enforcement Administration. DEA then took an additional two years and two months -- 813 days, to be exact -- to process my request; which, to be clear, asked only for materials that had already been shown in an open courtroom.

I use the term “fulfill” loosely. DEA withheld 87 percent of the pages it processed for my request, and the vast majority of the documents it “released” -- slides and photographs with big white boxes obscuring their substance; hundreds of pain-clinic sign-in sheets with all info but the date redacted; Xeroxes of the front, back, and spine of notebooks from which the contents were withheld -- bore little resemblance to what Volkman’s jurors saw. And so, in March, with the help of two pro-bono attorneys and the ACLU (which has a representative speaking at the House Oversight hearings), I sued the DEA, demanding the release of the evidence and an admission that the documents had been wrongfully withheld. I’m currently awaiting the agency’s official response.

My experiences, unfortunately, are not unique. It turns out the DEA -- famous for cartel-funded sex parties, leaving innocent detainees to almost die in forgotten cells, and belligerently continuing the War on Drugs despite widespread disapproval -- has a less-than-sparkling transparency reputation. This is an agency that increased FOIA rejections 114 percent between 2009 and 2012, and recently gave a FOIA requester a $1.4 million fee estimate. In 2011, a judge on the Fourth Circuit U.S. Court of Appeals excoriated the agency for its “maintenance of complete and utter silence for periods vastly exceeding at every juncture the statute’s requirement of a prompt response.”

But I’m straying from my main topic: this week’s hearings. Whether House Oversight’s FOIA sessions are a sign of political grandstanding or a genuine step toward reform is a matter of legitimate debate. But FOIA fans have long had June 2, 2015, circled on their calendars. At the very least, it will give lawmakers a chance to hear from a Transparency Dream Team that includes VICE’s legendarily dogged FOIA wiz, Jason Leopold; the director of the National Security Archive’s FOIA Project; the New York Times’ assistant general counsel; and various other journalists and transparency advocates.

Mind you, not everyone will be there voluntarily. After the IRS declined two invitations to send its Director of Privacy, Governmental Liaison, and Disclosure to the hearings, the head of the Oversight Committee subpoenaed her. Think about that: One of the IRS’s top transparency officers had to be legally ordered to talk to Congress about transparency.

These hearings, admittedly, will be a bit wonky. And if you don’t want to dive straight into the FOIA deep end, there are other options. You can FOIA yourself to see if the FBI maintains a file on you. You can browse Amtrak customer cafeteria-car complaints, which are some of the funnier docs FOIA requesters have knocked loose. You can dip a toe into the ever-lively #FOIA stream, on Twitter. And you can check out some of the worst responses to public records requests, via the “Golden Padlock” award and the Electronic Frontier Foundation’s “Foilies.”

Whatever you do, when July 4th rolls around, remember that it’s not just the 239th birthday of the Declaration of Independence we’re celebrating. It’s the 49th anniversary of a historic swish of LBJ’s pen, which he followed by saying, “A democracy works best when the people have all the information that the security of the Nation permits.”