Scalia penned a majority opinion this week in favor of a Muslim woman claiming discrimination. Here's why 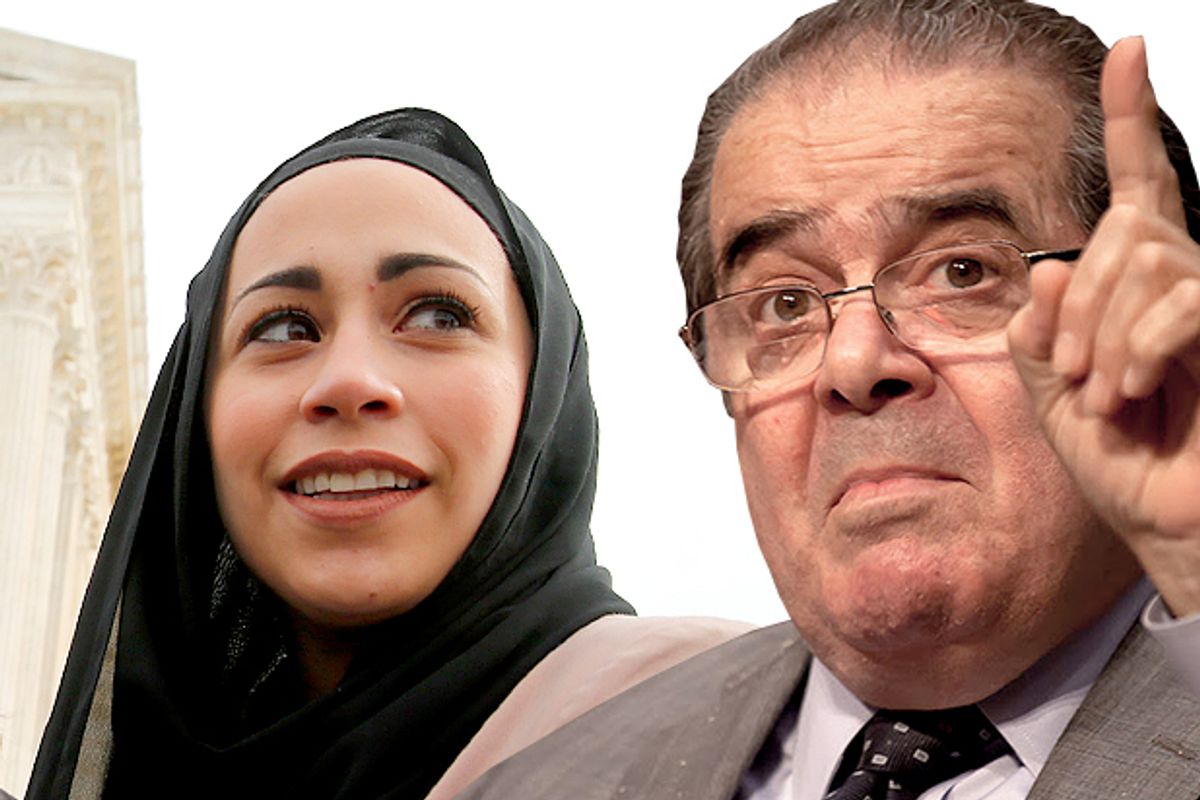 In a noteworthy ruling, Justice Antonin Scalia, who once called a key provision of the Voting Rights Act “a perpetuation of entitlement,” penned the majority opinion earlier this week that determined a young Muslim woman was unjustly discriminated against when she didn’t get a job because she was wearing a headscarf. Why would Justice Scalia, who often opposes civil rights claims, find this case to be “easy?” The answer points to an emerging trend in the Roberts Court, one that might have larger implications.

In 2008, Samantha Elauf, 17 years old and living in Tulsa, Oklahoma, applied for a sales job at an Abercrombie and Fitch store that specialized in selling children’s clothes. She aced her interview but didn’t get the job. Abercrombie has what’s called a “look policy” which bans hats for all sales employees of the company. With the help of the U.S. Equal Employment Opportunity Commission, Samantha Elauf sued the company and on Monday won, with an 8-1 ruling of the U.S. Supreme Court. In the case of EEOC v. Abercrombie & Fitch Stores, Justice Scalia wrote the opinion for the majority, with Justice Clarence Thomas concurring in part and dissenting in part.

This case hinged on whether Abercrombie was required to provide Elauf accommodation for her headscarf, a religious practice, even though she didn’t request such accommodation.

The 1964 Civil Rights Act “prohibits a prospective employer from refusing to hire an applicant because of the applicant’s religious practice when the practice could be accommodated without undue hardship.” Title VII of the Act prohibits employers from refusing to hire an applicant “because of such individual’s race, color, religion, sex, or national origin.” Another provision specifies the word “religion” to include “all aspects of religious observance and practice, as well as belief, unless an employer demonstrates that he is unable to reasonably accommodate to" a "religious observance or practice without undue hardship on the conduct of the employer’s business.” Given that, the Civil Rights Act requires that employers accommodate workers' religious beliefs in the workplace, by prohibiting them from firing, or not hiring, a person due to their religious beliefs. Abercrombie and Fitch argued that it couldn't have known to accommodate her religious beliefs, because Samantha Elauf never requested any such accommodation.

Eight of the nine justices did not find Abercrombie’s argument compelling, and reversed an earlier appeals ruling in the retailer’s favor. They found that what matters is not whether she requested any religious accommodation, but whether the manager at Abercrombie assumed that Elauf was Muslim and would regularly wear her headscarf while working at their store.

In this case, the headscarf was a "motivating factor" in their decision not to hire. Justice Antonin Scalia wrote for the majority that"[A]n employer who acts with the motive of avoiding accommodation may violate [the law] even if he has no more than an unsubstantiated suspicion that accommodation would be needed.” Scalia asserted in the opinion that "motive and knowledge are separate concepts."

Thus, the justices sent the case back to the appeals court to reconsider Samantha Elauf’s claim of that she was discriminated against.

Having been embroiled in this case for the past seven years, Abercrombie has changed its "look policy" and now claims to grants requests for religious accommodations, including the wearing of hijabs. That it took all these years and a Supreme Court ruling for the company to make such a determination is quite remarkable, given that the situation could have been prevented simply by having asked Ms. Elauf whether the store’s policy would be a problem for her, and made any accommodations accordingly.

But the question remains: Why would Scalia, such a noted opponent of civil rights protections, leverage the Civil Rights Act which he has challenged in many of the opinions he’s penned? In fact, this kind of ruling is of a piece with other recent decisions within the Roberts Court, in which the conservative judges are more open to civil rights claims in which religious discrimination is alleged. In January, the Supreme Court ruled, unanimously, in favor of a Muslim prisoner in Arkansas who wanted to grow a beard in accordance with his religious practice, but in violation of prison policy against such facial hair.  The Roberts Court has protected religious practice, but also religious institutions, at staggering rates; ruling, for example, in Burwell v. Hobby Lobby that for-profit institutions run by religious citizens would not be required to pay for contraceptives that they believe are responsible for the death of a fetus in accordance with the Religious Freedom Restoration Act (RFRA).

Particularly interesting here is the burden of protection: If employers like Abercrombie are required to make accommodations for a person’s religious expression, then how can they be allowed to dictate their employee’s access to health care (like birth control) at the behest of the employer’s religious beliefs? How might Justice Scalia, who notes that it was Abercrombie’s responsibility to ensure that Samantha Elauf could practice her religious expression, find that it was acceptable for Hobby Lobby’s owners to foist their values on employees? While some might argue that Hobby Lobby doesn’t discriminate against it’s employees because they are free to pay for their reproductive health care out of pocket, it seems an inordinate burden for employees who don’t earn enough to afford such care when they need it.

These rulings on religion from the Roberts Court merit, at the very least, curiosity about its understanding of protected religious expression and speech, for individuals, organizations and corporations alike.