Our governor's latest political bid, along with a local race scandal, has left the Big Easy feeling awful troubled 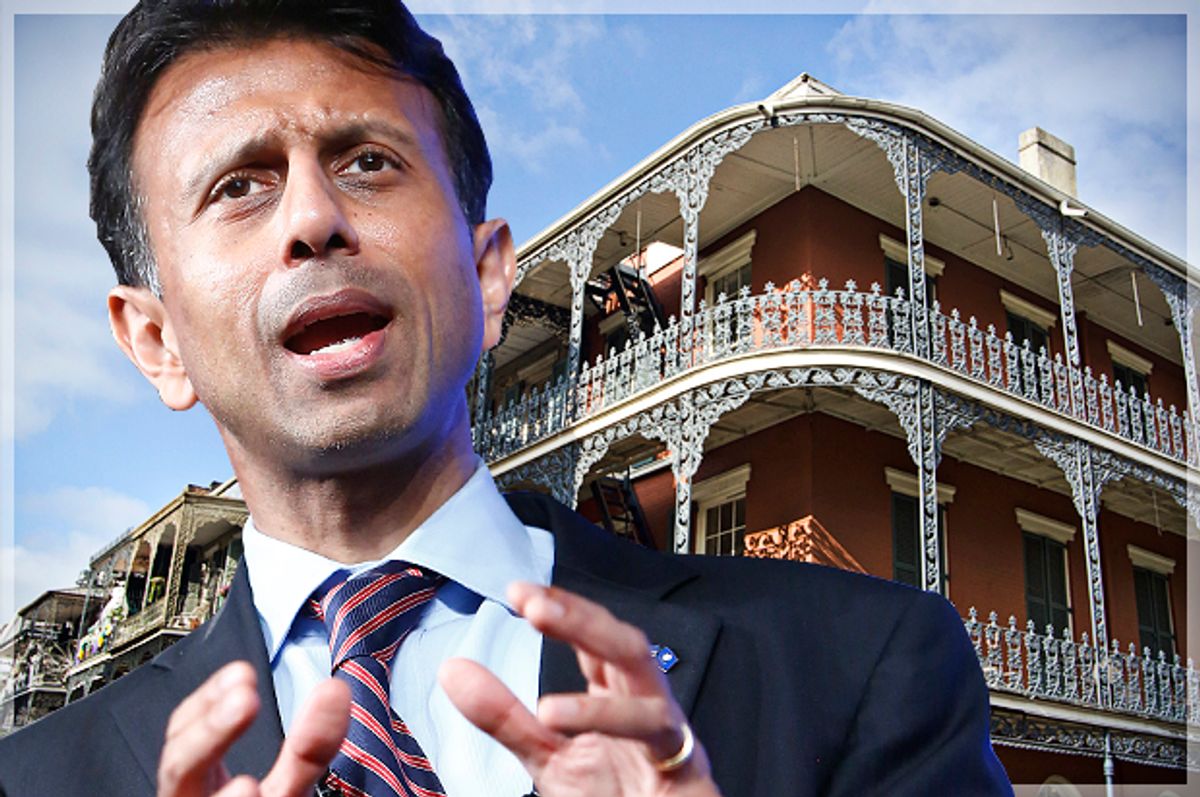 In a place with nicknames like the Big Easy and The City That Care Forgot, you can expect a certain laconic approach to almost everything in New Orleans. But one thing we take seriously is our hospitality.

New Orleans has always been a place where you can feel comfortable in your own skin, where pretense is nearly non-existent and where eccentricity is not only tolerated – it is celebrated.

New Orleanians are by turns unaware, unconcerned or unconvinced of the modern conceits of “personal space” and “too much information.” We talk too much, laugh too loud and live to large for some folks’ tastes.

We continue to carry out our daily affairs in quaint and antiquated ways. We still go to the post office and the bank, and many here still pay utility bills in person. We hold family cook-outs on the front sidewalk – never in the back yard.

We chat up everyone at the grocery store. We’re the last people in America who invite strangers home for supper. And we call you baby, even if we’ve never met.

I’m no doctor nor academician, but it seems to me there is something about the emotional intensity of life here coupled with our geographical vulnerability that creates a craving for human interaction that borders on the pathological.

And that’s why recent events have a lot of us here feeling, well – sick.

Right now, New Orleans feels neither big nor easy as we navigate through an image crisis and public relations meltdown that not only provokes civic self-reflection, but poses a serious threat to our economic well being.

For a city whose economy is tied almost entirely to the tourism and convention industries, New Orleans is, to quote one of our greatest writers, “dependent upon the kindness of strangers.”

But we’re not looking so kind ourselves after two recent acts of grave intolerance and bigotry set off a storm of bad press and public backlash.

First, our intensely ambitious governor issued the dubiously titled “Marriage and Conscience Order” on May 20 which – though its language is shaded with more nuance -- essentially makes it legal to discriminate against members of the gay, lesbian and LBGT communities.

In his efforts to find solid footing among contenders for the next Republican Presidential nomination, Bobby Jindal has made a calculated effort to secure the farthest right position among the candidates. This pandering effort may serve well with the Duck Dynasty constituency, but not so much in more moderate quarters.

The howls of protest were just starting when, the next day, a much quieter yet more intimately degrading act went down in New Orleans, in a French Quarter restaurant.

A waiter at a casual family eatery called Huck Finn’s inserted the following words onto the printed receipt of a customer: “Nigger 100% Dislike.”

Let me pause here for to let the volume and power of that terse statement to sink in.

Sometimes, there just are no words.

The Huck Finn’s incident was apparently an act of revenge upon a customer who had sent a dish back to the kitchen and received a discount for her meal. The waiter was fired on the spot but by that night a photo of the receipt went full viral; if you spend any appreciable amount of time online, you likely saw it.

And so, with the call for intolerance issued from our state capital and the flash-branding of racism cast over its restaurant industry, New Orleans has been crouched in defensive posturing ever since, waiting to see just how hard the hammer might fall.

IBM, which is building a large tech-services center in Baton Rouge, was the first among many businesses and corporations to decry Jindal’s order, pointing out what the Governor – in his blind ambition – perhaps could not see: That not only gay folks don’t want to live and work in a place where hatred and intolerance have the official imprimatur of government and the full protection of the law.

Jindal’s timing was sublime; he issued the order the same week that the NFL invited New Orleans to submit proposals to host the next two Super Bowls that are coming up for bid.

If the order lasts, it is unlikely the NFL’s gracious disposition towards New Orleans will.

As far as the Huck Finn debacle, the rage it incited on the Internet is still smoldering. The restaurant critic at the Times-Picayune wrote a column last week saying the implications are dire and the economic threat is real, though there’s no real way to measure the effects just yet.

As for Huck Finn’s itself, well – it doesn’t look good. Though the restaurant fired the waiter, it is the target of numerous boycott efforts launched both in the city an online.

There is a term originally employed by the famous Mardi Gras Indian Tribes of New Orleans which was appropriated by the population at large after the federal levees collapsed and nearly drowned this city 10 years ago: Won’t bow down/Don’t know how.

As the 10th anniversary of Hurricane Katrina approaches this summer, there is much reflection – and celebration -- about what this city has become since. It has been a decade of rebuilding, repopulating and reimagining New Orleans.

The flood washed away much of what we had but did not change who we are. The egregious offenses of two men have stained our pride and stoked our prejudice, but not diminished our capacity to embody the triumph of the human spirit in both its grand gestures and subtle manifestations.

Last month we celebrated the most significant cultural and economic event on our city’s very busy social calendar – the New Orleans Jazz and Heritage Festival. In addition to the hundreds of local musicians laying down the city beat, the festival features an eye-popping array of indigenous foods.

Many of them are impossible to pronounce and their ingredients are alien to the palettes of most folks visiting from north of Interstate 10.

Crowds get thick around the food booths and passage can be difficult as everyone strains to try and figure out what all these unfamiliar dishes are. And the best way to tell visitors apart from locals is to by asking someone what they’re eating.

Folks from out of town will answer your question. Folks from New Orleans will likely offer you a bite.

That’s just the weird wonderful way we are. We’re still the most diverse and welcoming city in the South. And we still call you baby.

And the best things about us will never change.

Watch this colorful video on street performers in the French Quarter:

Chris Rose is a freelance writer living in New Orleans. His New York Times Bestseller, "1 Dead in Attic," about the struggles and absurdities of life in New Orleans after Katrina, will be reissued by Simon & Schuster this summer to mark the 10th anniversary of the storm.