If you're looking for a sensitive dissection of a family in crisis, you're in the wrong place 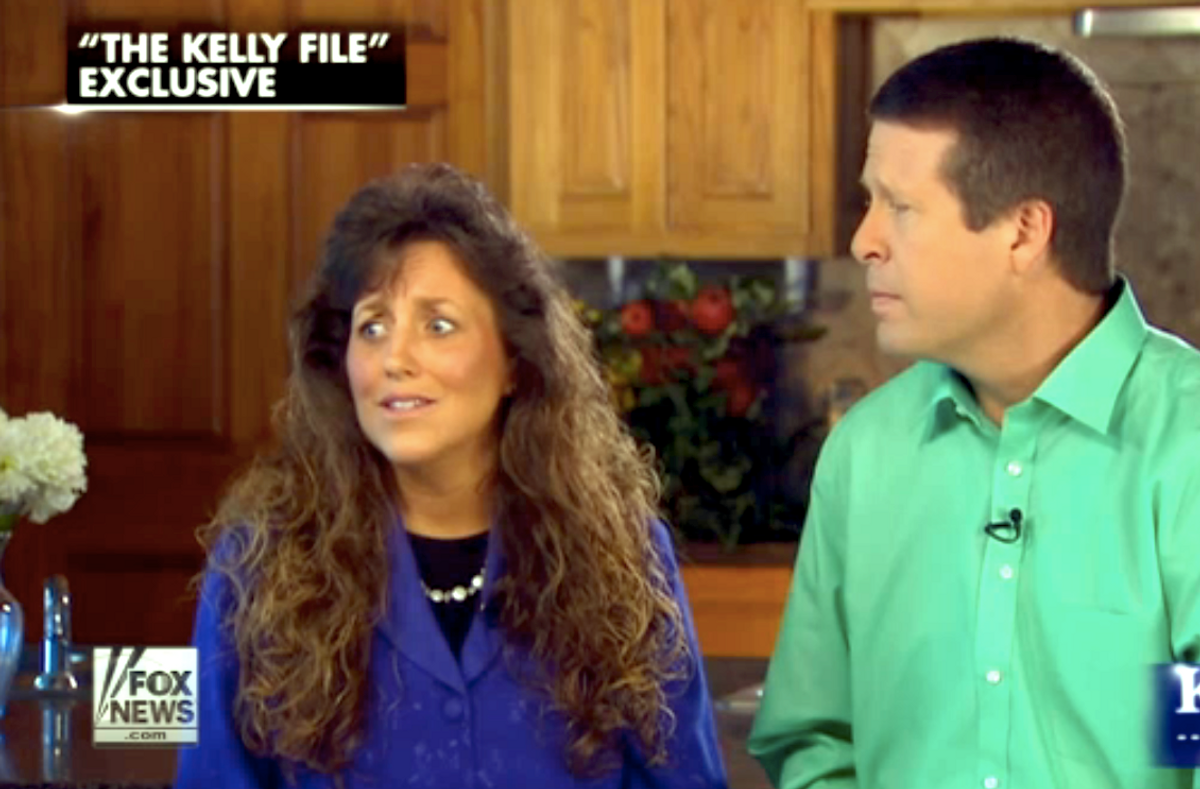 Welcome, readers, welcome. In just a few short minutes, I, Your Fearless News Editor, will be tuning into Fox News' "The Kelly File" for the first time in my life. Once there, I will bear witness to the first big stop on the Duggar family's Please Don't Stop Loving Us and Cancel Our TLC Show Tour 2015.

I feel that before we go any further, gentle reader, you and I should have a word. Come, sit down.

The crimes that occurred in the Duggar household before they became Reality TV superstars were of a very grave and serious nature. Young children were harmed and -- so far as we can tell -- no reasonable effort has been made to get those victims treatment outside of their rigid, God-bothering, faith-obsessed family environment. We are not here tonight to make light of those children's pain or to in any way condone what has been done to them by their own family.

However, what we are about to witness in this interview is not a sincere, good-faith effort by a pair of concerned parents to do what is best for their daughters. Whatever we see tonight, we are virtually assured that it will not be that.

In truth, we have front-row seats for a pair of millionaire political operatives' attempts to minimize their potato-headed, neckbearded sociopath of a son's crimes against their own children and to furiously try to pull their media empire out of its tailspin. They will deny their own complicity in enabling and covering up these crimes. They will insist that their family has suffered enough and those of us who might be tuned in tonight to point and laugh at their hypocrisy are just mean-spirited, godless, hard-hearted liberals.

And they will be right. But only on that last bit.

As my mother -- god rest her soul -- used to say, if you can't say anything nice, speak up so everybody here can hear you, honey!

GET SNACKS. GET DRINKS.

What are we going to drink on? Because obviously we're going to make this a drinking game. Obviously when Jim Bob and Michelle they say that Jesus has forgiven Josh, you have to take a shot.

When they say that this experience has only brought them closer (ew) as a family, take a shot.

When they shift the blame to Michelle or some other woman, or the intractable power of the Pussy Radiation which women emit that turns men's mind to jelly and makes them act out on their basest, filthy instincts, take two shots. And a Percocet. It's going to be a long night.

When they say how much they love America, take a shot.

Hmmm. What else? Tweet at me (@TRexstasy) if you have good suggestions. See you when the show starts!

9:01 p.m.: Megyn looks nice. The mullet fall she's wearing may be an effort to reach the Duggars on their own level? She could also consider rolling a pack of Kools into her shirt sleeve.

9:10 p.m.: Jim Bob insists that other families have had these same kinds of problems. Josh was just a kid. And the girls were never conscious! Did we mention that? The girls never knew until we told them!

"As parents, we're not mandatory reporters," says Jim Bob. Someone's been reading up on his legal loopholes.

9:15 p.m.: Nota bene: It should be noted that Your Fearless News Editor is not imbibing. I am merely encouraging you all to indulge yourselves. I am at work and relegated to humble seltzer water. But I am your drinking cheerleader. Your BEERLEADER, as it were!

9:20 p.m.: There are so many things that we could say about Michelle Duggar's hair, how it is actually her twentieth child, Jehosephat, how it is tangible proof that she has never been within a hundred yards of an actual gay person, how it is amazing that she has that much collagen left in her system after pooping out two basketball teams, but just for a moment, let us sit back and marvel at it just as it is.

9:25 p.m.: They keep talking about these "other families" where "even worse" things went on. You know, Duggar family, what's normal in your weirdo snake-handling backwoods clique might not be all that normal among those of us who don't believe that Adam and Eve rode dinosaurs to church.

9:29 p.m.: Break. Take your black, evil hearts to your kitchens for more snacks and drinks.

9:32 p.m.: And we're back. And of course that cop who says Josh lied to him about how many times he touched little girls is lying. Who knows why he would do that, Duggar family? That's just weird, isn't it?

I rolled my eyes so hard I think I pulled a muscle in my forehead. Like, it really hurts.

9:39 p.m.: These cutaways are so weird, they just pull out while Michelle is still talking. I wonder what ended up on the editing room floor. I bet that's a better TV special than this.

It's just so deeply creepy to me how they keep talking about how Josh's "heart was still soft" because he came to them all:

Then, he went on to work for hate group the Family Research Council, where he preached to other people that LGBT people are dangerous sexual predators. Was his heart still soft then?

"It was resolved, we were forgiven," insists Michelle. DRIIIIIIIIINK!!

And nooooo, Josh couldn't be a pedophile. He had two more whole years before he was legally a pedophile.

9:48 p.m.: Could I just insert here on behalf of myself and all LGBT people, Michelle Duggar, please go fuck yourself with a dead cat. You people are a lot more dangerous to children than we are. Denny Hastert, anyone? Mark Foley?

9:52 p.m.: "We are fine whether they film us or not," insists Jim Bob. LIE LIE LIE. Everybody take a big drink. Then hit yourself in the face with a cast-iron skillet. Hard.

9:55 p.m.: "An unprecedented attack on our family," says Jim Bob. Why isn't anyone going after the people who punctured our bubble of hypocrisy? Hm? HMMMM??!!

Oh, god, I hate when people call themselves "a mama." I just had a huge, full-body shudder.

And here come the waterworks. Our girls are getting victimized afresh by the light being shone on the slimy underside of our rock.

Oh, so, by all means, let's PULL THEM OUT IN FRONT OF THE CAMERAS!

Do you think the cognitive dissonance ever makes these people's ears bleed? Or does it all just go into the whirling vacuum of Chick tracts and extreme coupon-ing tips between their ears and disappear forever?

9:59 p.m.: It is only just now dawning on Your Fearless News Editor that this might be a two-hour TV event. And I am sore afraid.

10:09 p.m.: Oh, look, there’s Sean Hannity. I guess that we will be back for more Duggery tomorrow night. Oh, praise Jesus, it isn’t two hours after all. Now I can order some takeout and watch something that doesn’t involve completely insane people in pastel cult-suicide-colored outfits talking utter rot out of their sanctimonious blowholes.