Is it really any surprise the GOP's outreach to Black voters is failing? 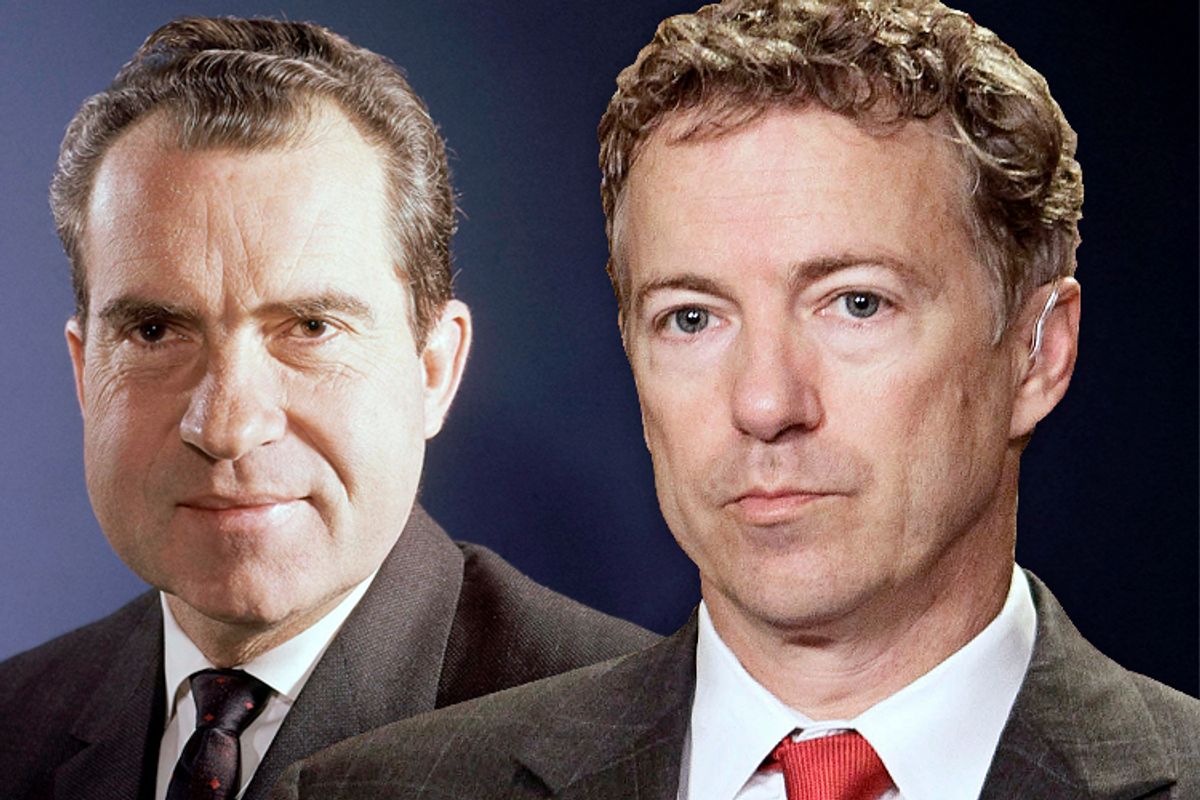 It has often been my observation that every African American Republican must be on cable TV. There aren't very many but that's only because there are almost no African American Republicans at all. This is not to say that black conservatives aren't sincere in their political beliefs. It's just that they represent a vanishingly small minority of the African American constituency: According to Gallup, only 2 percent identify as Republican. That is a major hill to climb for the GOP and it makes you wonder why they would even try to present themselves as an integrated party.

Historically, African Americans were Republican, of course. Abraham Lincoln was a Republican and you can imagine that that was as strong a validator for them as you can get. GOP hacks love to dredge this up as some sort of proof that black Americans are more naturally Republican but that's just as ludicrous as saying that Martin Luther King was a conservative. The fact is that African Americans were Republicans from the post-Civil War period until the turn of the century. After all, the Democratic Party's stronghold was in the South, where most blacks lived. It was white supremacist and didn't allow black people to vote at all.

Franklin Roosevelt attracted a lot of black votes, although his deals with the the Southern Democrat devils often excluded them from his programs. But they liked his philosophy, as most of America did, and by 1936 he was getting 70 percent of the black vote. It wasn't until the late 40s that a majority called themselves Democrats, though, and that was tied to a particular set of policies: in 1948, Harry Truman integrated the military and the federal civil service. But Republicans still got 30% of the African American vote until the mid-60s when Lyndon Johnson got civil rights legislation passed.

Now, Republicans could have greeted that migration to the Democratic Party a number of different ways, perhaps most logically by trying to beat the Democrats at their own game. But they let their African American constituency go slowly at first and then all at once by making a fateful decision. In 1964 Barry Goldwater's campaign decided to oppose civil rights legislation. And by 1968, the party fully committed to a Southern Strategy to appeal to white southerners and their brethren in the north who were hostile to civil rights and African Americans in general. And that strategy led to decades of race baiting and dog-whistling and "law and order" campaigns designed to divide white America from black America.

This recent history is all disputed by conservatives, of course, who think they're being clever by pointing out that it was Southern Democrats who instituted and fought for Jim Crow so African Americans should by all rights be Republicans even today. Let's just say they aren't as clever as they think they are and African Americans certainly aren't that dumb.

But the Republican party isn't really trying to get black votes (or at least they're not willing to make any concessions in their basic policies to make that happen.) However, they have a problem with a constituency they do need to vote for them: decent white people. And decent white people don't want to be complicit in racism. (Granted, most decent white people are complicit in racism in a thousand different ways even if they don't fully realize it, but voting for a party that is overtly racist is so obviously wrong that many of them will balk at such an association.) And since the Republicans have alienated virtually all Americans of color, they must get a large percentage of whites in order to win political power.

This may be why we see so many of the few African American Republicans out there in public roles, especially as conservative commentators on television. The Party isn't trying to attract African American votes or even engage in crass tokenism. It's trying to soothe enough whites' discomfort with voting for a racist party that they can get across the finish line on election day with a winning margin.

That's not their only game in town, however. They've got Paul Ryan's poverty tour which ended up insulting African Americans again. And there's Rand Paul's lugubrious paeans to solidarity with his black brothers and sisters (despite his strange history of consorting with neo-confederates). And just this week there was this rather sad display as related by Dana Milbank in the Washington Post:

The event was called “A Republican Salute to Black Music Month” and, according to organizer Raynard Jackson, a black Republican consultant, was to include R&amp;B legend Sam Moore (“Soul Man”), Marlon Jackson of the Jackson 5 and others.

The Republican chairman, a Greek-German Wisconsinite, sharing a stage with legends of soul and funk? Pure gold! But somebody missed his cue.

Moore, Marlon Jackson and the others showed up. But among the “confirmed participants,” Priebus was the sole man missing. And there was nobody from the RNC to take his place.

“Reince Priebus was scheduled to be here,” Raynard Jackson explained to guests at the posh University Club. The host said Priebus sent regrets because he’d had surgery on Friday and was having difficulty talking. “He’s sore as heck,” Jackson explained. Jackson told me Priebus had confirmed his attendance Friday but wasn’t feeling as well as he’d hoped on Monday — and by then it was too late for the RNC to find a stand-in.

But an RNC official told me that Priebus’s surgery Friday had been scheduled, elective and outpatient and that the chairman was doing fine. The official said Priebus had never formally committed to attend the black-music event.

Whatever the cause of the chairman’s absence, it would be unfair to say there was widespread disappointment, because attendance itself was not widespread. The organizers had warned of the “limited number of seats available to the general public,” but half of the 50-odd place settings in the room were unused. Rather than a Republican salute to black music, this was a limp handshake.

Milbank goes on to discuss all the recent "outreach" events announced by the former head of the RNC, Michael Steele (who was pretty much run out of office on a rail but now appears regularly on TV, of course). And Reince Priebus himself has made numerous promises to engage the black community and fight for its votes. And yet the party continues to cut a swathe through state legislatures all over the country with a well financed effort to suppress the votes of African Americans and Hispanics. Indeed, just this week, a conservative legal team succeeded in getting the Supreme Court to take up the case against "one person, one vote," a concept so deeply embedded in the African American experience it almost defies common sense that anyone would have the temerity to argue against it in those terms in the year 2015. But they did.

Talking Points Memo wrote about the man who spearheaded this challenge:

Edward Blum has been trying to take down “one person, one vote” -- a tenet of modern voting rights law -- since 1997. Last week brought him his biggest breakthrough yet, with the Supreme Court surprising many election law experts by taking up a redistricting case that has the potential to redefine "one person, one vote" and fundamentally alter how electoral districts are drawn nationwide.

“That’s the bulk of the reason I pursued this,” Blum told TPM last week after the Supreme Court announced it was taking the case. “The effect that this policy has on race is surely one of the reasons I’ve been interested in it and many others have. But also a question of fairness in our democracy drove the filing of the suit.”

It doesn't get any clearer than that. Is it really a surprise that Republican efforts at African American "outreach" are failing? African Americans understand very well that they're still getting the short end of the stick in America. But there's little doubt that one of the political parties is more likely to value their votes than the other. The best the Republicans can hope for is to soothe enough oblivious white people into thinking the GOP isn't employing racist strategies anymore. And yet every time they introduce another vote suppression law or take another case to the Supreme Court that obviously designed to disadvantage African Americans at the voting booth they prove what they really are --- what they've been for over 40 years. And the numbers of Americans of all races who will go along with that are shrinking every year.