Stunning, bloody "Hannibal" challenges our senses of beauty and revulsion 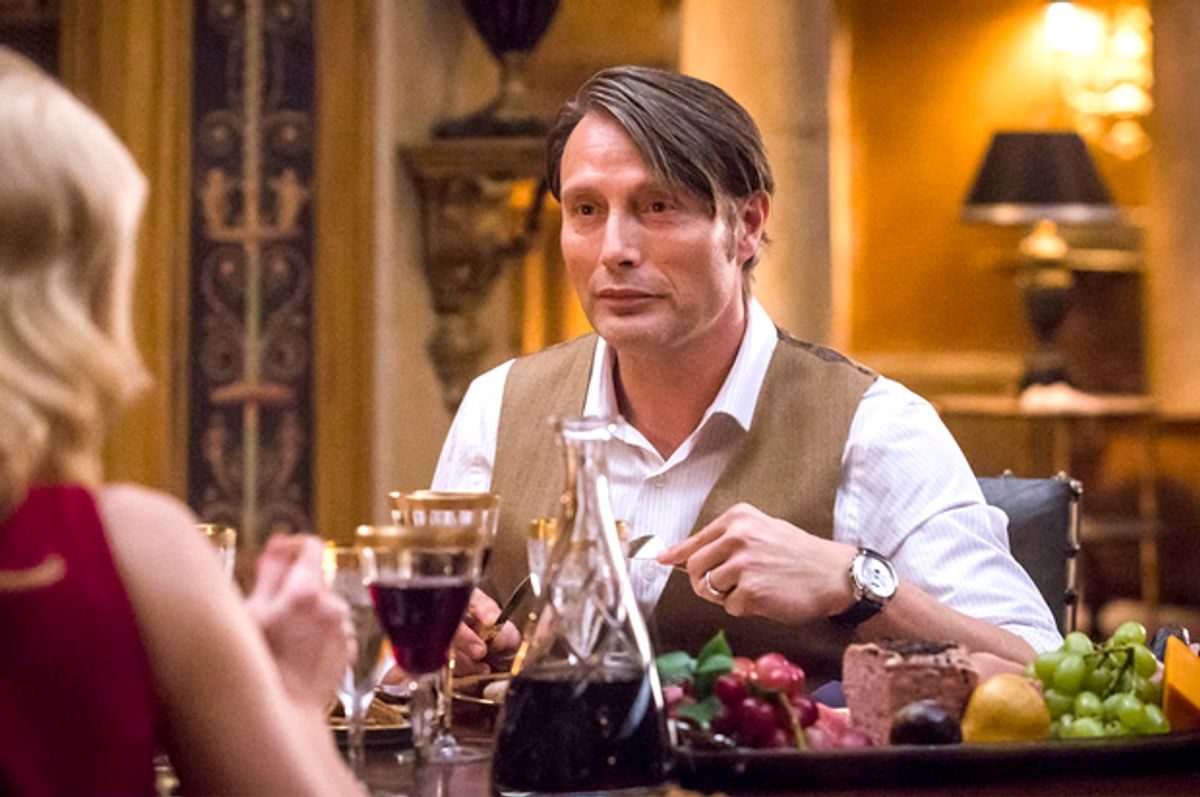 I have only read half of “Lolita.” The Vladimir Nabokov novel is widely considered a masterpiece, and when I was assigned to read it during a writing class, I looked forward to finally understanding what all the fuss was about. I did my best. I met Humbert Humbert. I met Lolita, whose given name was in fact Dolores. I read as Humbert married Lolita’s mother and then, after she died, went to pick up the girl from summer camp. But that was it. I could not read further. In class, I didn’t know what people were talking about, both when other students discussed the ending and how much they enjoyed it. All I had in my head was a strong desire to not know, anymore, what it was like to be inside the mind of a pedophile.

Something similar is in my mind while watching NBC’s “Hannibal,” the horror-crime drama based on Thomas Harris’ Hannibal Lecter books that is returning for its third season Thursday night. Those books have already influenced cinema indelibly—“The Silence Of The Lambs,” most notably, starring Anthony Hopkins as the cannibal in prison and Jodie Foster as the investigator trying to best him. “Hannibal” attempts to tell some of the interstitial stories of the mythically evil man. I cannot fault the show’s artfulness—creator Bryan Fuller has made, in “Hannibal,” one of the most aesthetically stunning shows on television—but I recoil at how familiar the show has made me with the mindset of a monster.

To its credit, “Hannibal” gets that. I’m not entirely on board with all of Fuller’s operatic, bloody vision, but if it’s hard to watch, well, that’s the point. Hannibal Lecter in the show—played with almost campy enthusiasm by Mads Mikkelsen—is so absurdly all-powerful and coolly destructive that he is less a character than the physical embodiment of murder. Not only is he unequivocally evil—if evil is what we call something that produces just suffering for other people, instead of mitigating it—but he’s also essentially unstoppable, wreaking a path of violence that is as much about emphasizing the beauty of gore as it is about harvesting people for their component parts of flesh, bone, and organs. Almost everyone who shows up on-screen in “Hannibal”’s first two seasons ends up bleeding by his hand. For those who have yet to be touched by his violence, the audience knows: It is just a matter of time.

That’s a lot of creeping dread for anyone to handle—even audience members who managed to get through all of “Lolita.” Weirdly, though, even as the show is suffused with blood and death and the voices of the suffering, Hannibal himself is so devoid of feeling that the show becomes curiously divorced from feeling for the victims. It’s a story told best in the visuals: Fuller’s drama features gorgeously stylized visions of blood spreading across slick surfaces, ice picks entering skulls, antlers sprouting from contorted flesh, and skin peeling away from muscle with the grace of unfolding petals. But because we are in Hannibal’s head—and because we are reveling in the aesthetics of horrible death—the gore becomes terribly beautiful, the blood, strangely appetizing. “Hannibal” employs one of the best food stylists in the business, precisely for this reason—to confound our sense of what is repulsive and what is appetizing, what is grotesque and what is beautiful.

The result, to be frank, is a mind-fuck. It’s the kind of mind-fuck that a lot of fans are really into, and more power to them. Maybe, to be honest, it would be entirely too hard to watch if we felt the bitter taste of panic that Hannibal’s victims must feel, suspended as they are in brutal animation.

Held in contrast to the theater of gore is the show’s delicacy with the relationship between investigator Will Graham (Hugh Dancy) and Dr. Lecter himself. In the first season, Will was being ensnared; in the second, he is snared. Both are grueling processes to watch, partly because Dancy infuses Will with such unmitigated goodness, expressed mostly through those puppy-dog eyes. What really makes “Hannibal” a horror show is not the blood, the dismemberment, the cannibalism—it’s the torture Hannibal inflicts on Will’s mind, the commingling of violence and affection, of love and disinterested murder. And just as we, the viewer, are experiencing mental doublespeak, so too we watch Will experience it—as his respect and admiration for his friend becomes his permission and enablement of a monster. (As yet, Fuller has not gone so far as to put Hannibal and Will in a sexual relationship, to either the chagrin or satisfaction of the show’s enthusiastic fans. From my point of view, a romance is not exactly necessary, but god, it would make a lot more sense.)

My feelings on “Hannibal” changed almost completely when I discovered that according to the lore established in the books (lore that the show has cleaved to so far), Will Graham is not just Hannibal’s favorite, beloved victim; he’s also the man that eventually puts the monster in prison. That’s a fact that makes the show watchable in a way I have not felt up till now. For all of the show’s visual flair, it has a tendency to stray too far into “pretentious art film”—a phrase Fuller himself used—and there are vast stretches of the show that are empty of any story device save atmosphere, which is especially tedious when we’re watching Hannibal ensnare yet another hapless victim. It’s beautiful, but this level of violence cannot possibly exist in a world without further implications, and at times the show loses sight of that in the name of artistry.

But knowing that we can safely root for Will makes it so much easier to plug into “Hannibal”—especially in this third season, where, following the bloodbath that ended season two, Will leaves the hospital and begins to stalk his prey in gorgeous, sensual Italy, with perhaps the most knowledge and agency he’s had in the series to date. Gillian Anderson’s Bedelia is a lovely addition to the story, but ultimately a sideshow; this story is about what Will and Hannibal will do to each other when they see each other next. Episode two, “Primavera,” which will air next week, offered to me an indication that at least when it comes to the fractured psyche of onetime victim Will Graham, “Hannibal” knows exactly what its doing. Whether or not I will be able to soldier through the gore to appreciate that storytelling remains to be seen.