The "Entourage" gang returns: A power ranking of the 5 bros, from best bro to worst

Four years later, we check in with Ari, Vince and the boys from Queens to see how the movie treats them 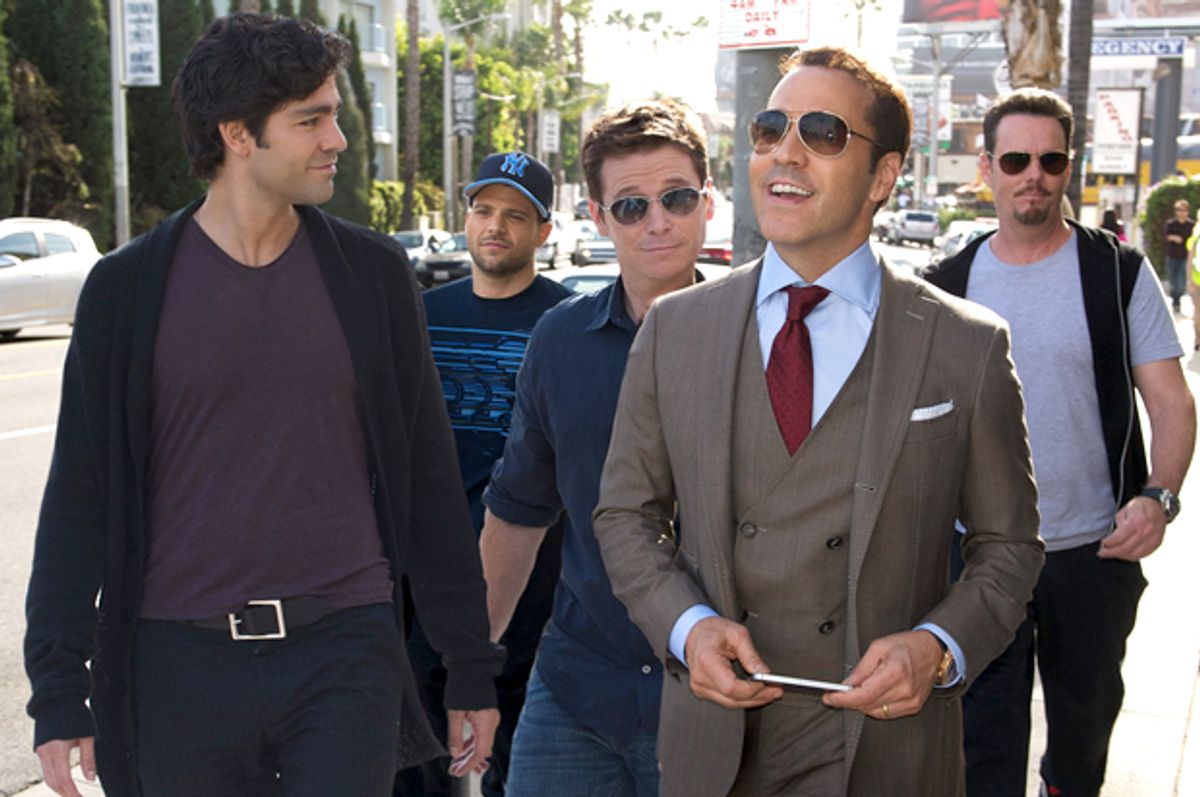 Let’s get this straight right off the bat: "Entourage" is not a movie with high stakes. Our four bros (plus Ari G!) are already rich, successful, and constantly hosting topless pool parties full of women way out of their league, so there really aren't that many mountains left to climb. Basically, the narrative revolves around the fact that Vince decides he wants to be a film director, but he and Ari, now a studio head, run in to trouble when Texan financier Billy Bob Thornton and his douchey son Haley Joel Osment refuse to release more money for the project. Cue Jane's Addiction (I wanna be your superheeeeero, eeeeven if I tumble fall!)

But of course, "Entourage" has never really been about the plot -- it's about the bros, and the real basis for the film's existence is the joy of reuniting with the gang we know and love, as we get nostalgically reacquainted with Ari's foul mouth, Drama's casual misogyny, Vince's womanizing, E's relatable nice guy shtick, and the fact that Turtle can drive. Here's a ranking of how our dudes hold up four years later, from best to worst.

5. Character: Ari Gold (Jeremy Piven)
New shtick: Promoted to studio head, trying to manage his anger with couple's therapy
Narrative conflict: Has to save Vinnie's movie but the Texan financiers won't release more money, gets angry in the process
Verdict: Ari has always the best character on the show, and he’s still probably the best character in the film, although neither are quite what they used to be. He has now been promoted from agent to studio head, but his role in the drama is basically the same, which is to cruise around facilitating celebrity cameos (of which there are many!) and cursing at people in innovative ways. We get some good explosive Ari insult moments out of it — although I can't recall any off the top of my head, which is a bad sign — but we also get a bunch of not-so-funny gay and racist gags that make the character a lot less lovable than he was back on HBO in the mid 2000s. Frankly, his whole shtick feels a little tired, especially since there are plenty of others (see “Veep”) doing the whole rapid-fire-insult-tirade game so much better right now. (Can we get Julia Louis-Dreyfus in "En2ourage"?)

4. Character: Johnny "Drama" Chase (Kevin Dillon)
New shtick: n/a (still livin' with baby bro)
Narrative conflict: Still trying to emerge from baby bro's shadow
Verdict: If Ari is the franchise’s comic relief, Drama is its (unwitting) emotional heart, largely because he’s the only one of the gang who still has anything left to strive for. Turtle is svelte and rich in tequila money, boring E is boringly having a boring baby, Vince is a successful movie star with successful movie star problems, yadda yadda. Drama is the only one who is really still remains fully in his brother’s shadow, so his redemption arc, which involves him getting caught in an embarrassing sex tape, having a breakdown that causes someone to ask if he’s suicidal (seriously, it gets dark) and then redeeming himself through the power of ~acting~, is sort of the only time I actually care about any of the characters. Plus, Kevin Dillon is the most expressive actor of the bunch and it's still fun to watch him mug, although he remains a gross misogynist whose first line in the whole film is “I may have to jerk it before I even get there," so it’s still a pretty low bar we’re talking here.

3. Character: Salvatore "Turtle" Assante (Jerry Ferrara)
New shtick: Now rich and skinny
Narrative conflict: Has to woo MMA fighter Ronda Rousey for romantic purposes
Verdict: In the interim between the series and the movie. Turtle somehow lost a bunch of weight and made a bunch of money — the joke about nobody knowing exactly how much money he made is one of the film’s few funny recurring gags — and yet now that he has no reason for his scrappy underdog persona, he’s also way less fun to watch. His subplot involves him attempting to woo Rousey, having a fake argument with her to add some semblance of conflict into an otherwise pointless subplot, and then fighting her in the ring in order to ask her out on a date, because that’s how dating works (haven’t you guys ever seen “The Bachelorette?”). In conclusion, Turtle remains the most medium character on Entourage.

2. Character: Vincent Chase (Adrian Grenier)
New shtick: Wants to be a director
Narrative conflict: Needs to get Ari to get enough money to help him finish the film (which could be either or a success or a disaster!)
Verdict: Vinnie always rather implausible as a movie star (because he has no natural charisma) and an acclaimed actor (because he can’t act). The notion that he might also be a Golden Globe-worthy director is, well, possibly the most laughable part of a film with many laughable moments. But this isn’t real life, kids -- this is the "Entourage" movie, where all nipples are freed, where Turtles stand nobly alongside men, and where dreams really do come true, if only your bros believe in you. So wouldn’t you know: it turns out Vinny is a god-damned directorial virtuoso, sort of like Scorsese, Tarantino and the Coen brothers rolled into one, only way more awesome. The scene we get to see from movie itself, “Hyde,” about an alien DJ with white walker eyes who shoots magical golden droplets into the crowd that somehow initiate a police riot (I have no idea but this is my best guess?) is literally too bizarre to describe, but Ari says its a goddamned masterpiece, so I guess that's what's up.

1. Character: Eric "E" Murphy (Kevin Connolly)
New shtick: Having a baby with long-term love interest Sloan (Emmanuelle Chriqui) even though they aren't together anymore
Narrative conflict:  Getting in trouble for sleeping with too many women while said baby is on the way
Verdict: E is still the worst character on “Entourage.” He has less charisma than a cardboard cut-out of Vincent Chase, and I have almost as much trouble with the lovely Sloane deciding to have a baby with him as I do with the not-quite-as-lovely Doug Ellin deciding that E having a baby should be the main emotional anchor of the film. Seriously, I would rather watch Turtle have a food baby (RIP Fat Turtle) than see E have a real baby. Hard pass.