It doesn't get much more crazy than this... 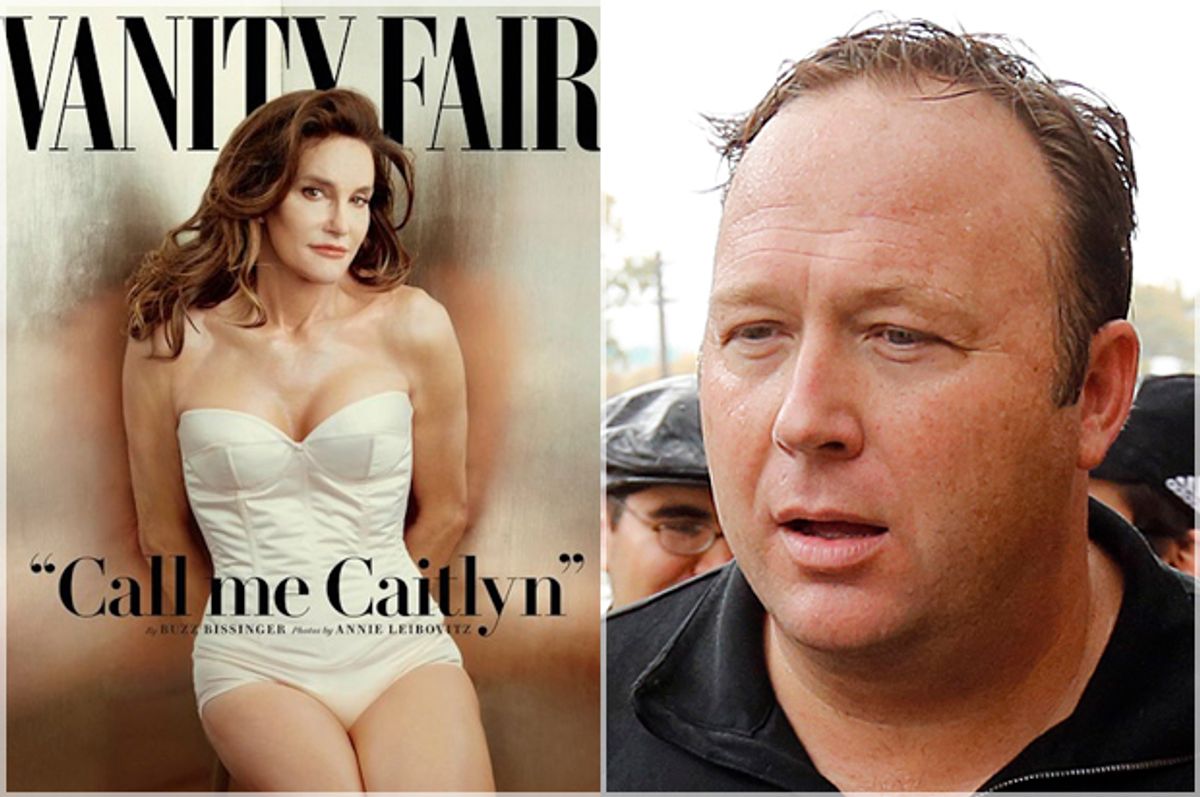 It didn't take long for conservatives all along the right side of the political spectrum to pile onto Caitlyn Jenner and her "Vanity Fair" photo spread this week. Most remarks were hilariously naïve; some were typically paleoconservative; while too many were outright cruel, bigoted and transphobic. But, predictably enough, far-right conspiracy theorist and talk radio mogul Alex Jones managed to be all of those things and a lot more.

Before we dive into Jones' latest unhinged rant, let's recap one of his most ludicrous conspiracy theories, which also happens to be germane to his reaction to Jenner. Several years ago on his show, Jones ripped apart a juice box -- one of many brands of juice marketed for children and packaged inside a handheld box and featuring an accompanying mini-straw. The purpose of his juice box vivisection was to illustrate how the government is deliberately tainting juice boxes with "estrogen mimickers" in order to somehow, and for some reason, create more gay people. Jones made the hilarious claim that the reason why there are "so many gay people" in America is because the U.S. government is attempting to reduce the birthrate with estrogen-mimicking chemicals in our juice boxes. Jones' calculus: more gay people equals fewer heterosexual pregnancies equals reduced birthrate.

Here’s exactly what Jones said back in 2010:

"The reason there’s so many gay people now is because it’s a chemical warfare operation! I have the government documents where they said they’re going to encourage homosexuality with chemicals so that people don’t have children. […]

Hey, let’s stop drinking out of estrogen-mimicking containers. And again, I even catch myself drinking out of these estrogen mimickers because it’s everywhere. I mean, take this [holds up juice box]. I don’t know, but I should check. This is probably lined with the type of plastic that has it. But I still grabbed this off the shelf this morning. Even though it says it’s organic, that’s not enough. In fact, let me — guys, give me a knife so I can tear into this. Let’s see if it’s lined with it. In fact, it’ll probably say it if it’s lined with it inside the plastic packaging. […]

Jones, once again, is both out of his gourd and horrendously misinforming his listeners.

On his Tuesday broadcast, Jones discussed Jenner at length and folded her into his "estrogen-mimickers" conspiracy theory, and then added a new layer to it. He began by acknowledging "studies that some people have a woman's brain inside a man's body, or a man's brain inside a woman's body." Fine. But then he added that it's "especially because of all the chemicals in utero early on in the development -- I mean some of that's going on. And the hormones in the food. It's on the record that it confuses every other advanced form of life." So, basically, some people are transgender because of "hormones in the food" and in-utero chemicals. Uh huh.

"The agenda behind all of this," Jones continued, "Is to confuse society and break everything down and make the natural systems -- the set default systems basically anathema." Again, Jones' ongoing buggaboo is that LGBT people are the unwitting consequence of a sinister agenda by the government, and possibly the Illuminati, to upend the so-called norms of society for a variety of reasons, including population control. Evidently.

"People go and they chop fingers off, arms off, but also the big thing is they'll get molten lead, pour it on their backs to have big scarification." So, now, transgender people are the same as the, perhaps, comparatively small cross-section of people every year who chop off their own limbs, which is an obvious and hamfisted attempt by Jones to suggest that transgender people are in the same category and are therefor mentally ill.

Jones reported that he got his information from an article about "transabled" people in the conservative Canadian news paper The National Post. And sure enough, the paper and the article exist. Reporter Sarah Boesveld described an extremely rare psychiatric disorder known as "transabled" (a portmanteau of "trans" and "disabled") recognized by the Diagnostic and Statistical Manual of Mental Disorders. The article also happens to mention that transabled people, who intentionally damage their otherwise healthy bodies with amputations and the like, absolutely want their disorder to be categorized as a mental illness. (The trangender community, by the way, does not.) The article also notes how the transgender community doesn't wish to be conflated with transabled people. And finally, it goes without saying that there's nothing in the article about any sort of government agenda behind it all.

And yet we're still not to the really bizarre partL

"Or they like to get shot," Jones said, "With .357 magnums through up under the chest, but missing the heart to blow a huge shrapnel hole in the back, and those are real sexy supposedly... This is the new big push and you're not cool enough to understand how wonderful it is to be shot with a .357 magnum or how cool the bullet holes are... It'll become sanctified. It'll become a religion."

As Jones moved along to a commercial break, he tagged the discussion with a few words about pedophiles and the NAMBLA organization, noting that if it's already wrong to be transphobic, then how long will it be before it's also wrong to be "pedophobic" or intolerant of pedophiles. Clever.

Let's swing back to Jones' theory that estrogen-mimicking chemicals are responsible for more gay or transgender people, and that it's all part of a population-control conspiracy: First, yes, there are in fact certain chemicals called "endocrine disruptors" that could be dangerous if ingested in heavy doses by young children or transferred to a fetus through the umbilical cord. These chemicals are best known to sometimes leach into bottled water from the plastic container material. You might see water bottles in stores with labels that say "Bisphenol-A (or BPA) Free." Many towns in the U.S. and Canada have already banned the use of packaging materials that contain it and other known disruptor chemicals. The FDA and other agencies under the Obama administration have been studying the negative effects of BPA since 2010.

Jones might've also been talking about phytoestrogens, which are natural chemicals found in plants and most commonly associated with soy. In fact, gynecologists sometimes recommend that pre-menopausal women drink soy milk to ease the hot flashes and so forth, but it really hasn’t been verified as an effective treatment. And there’s no evidence whatsoever showing that phytoestrogens reduce testosterone levels or turn people gay, or transgendered for that matter.

And, yes, testosterone levels have been slowly declining recently due to numerous factors, including obesity and, strangely, decline in smoking. (Smoking increases testosterone.) It's also possible that endocrine disruptors could be one of the multiple factors in the decline, but not the sole factor.

But the idea that the government is deliberately exposing Americans to these chemicals as a means of turning straight people into gay people is absurd on its face. It's ultimately nothing more than the psychotic, paranoid delusions of a homophobic, ignorant scare-monger. Why? Because the chemicals Alex Jones is talking about don't and can’t do what he’s claiming.

In spite of what he said, there’s no correlation between low testosterone levels and being gay. This is a myth that was thoroughly disproved long ago. Simply put: Gay men have just as much testosterone as straight men, and men with lower testosterone aren’t any more likely to be gay, while men with high testosterone aren't less likely to be gay. Testosterone, contrary to Jones' twisted theory, determines how much energy men have; it determines our level of libido; and it generates masculine physical traits. Not sexual attraction or even personality. Homosexuality has nothing to do with adult testosterone levels, and, furthermore, "government-induced homosexuality" is nothing more than an Alex Jones fever dream.

Come to think of it, if these chemicals reduce adult male testosterone and therefore turn straight men into gay men, thus somehow lowering the birth rate, wouldn’t the chemicals also decrease testosterone in women, thus increasing estrogen and therefor making women more fertile, which would improve the birth rate? Jones clearly didn't think this through. But what he's done, once again, is he's taken actual information and extrapolated it into the realms of the absurd. That's how he sells it, and that's one of the reasons why his paranoid listeners will absolutely buy into the crazy notion that Caitlyn Jenner mutilated herself as part of a diabolical government plot to overturn social norms.