Governor "Oops" is back: Rick Perry returns for another wild goose chase

Perry has no support, no expectations, and a reputation to salvage in 2016. This should be amusing 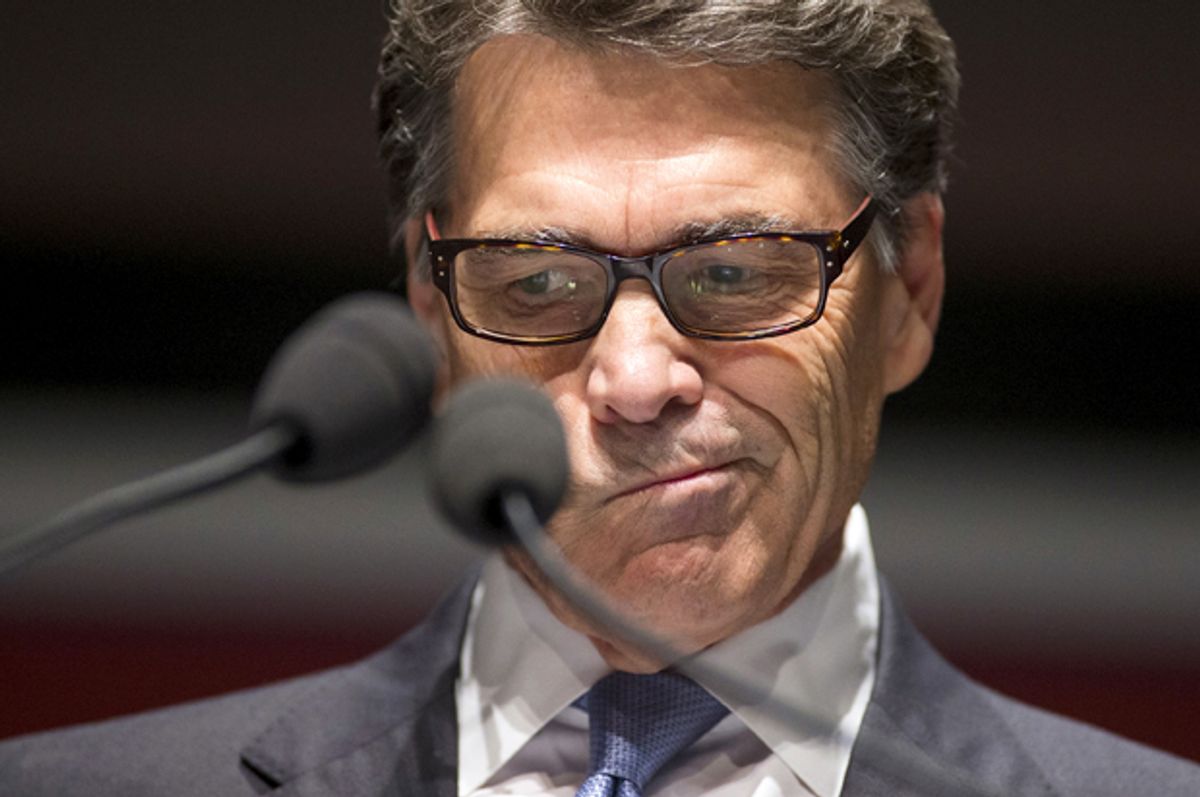 Get hyped, people. Former Texas governor Rick Perry is (according to press reports) officially becoming a candidate for the presidency today. Yee haw! Whoa cowboy! Other stereotypical Texas saying! He’s going to make the big announcement in Dallas (not at the Alamo, which is a gaffe) flanked by his wife and several Navy SEALs. So strap on your favorite jogging gun and grab yourself a corn dog – it’s time for Rick Perry 2016.

This is, of course, Perry’s second run for the presidency in as many cycles, and this time around he’s looking for a little redemption. Perry got into the 2012 race because of bunch of dummies in the Republican establishment told him he’d be a great president and he believed them. So he announced that he was running and then embarked on a gaffe-laden and strategically disastrous campaign that methodically destroyed his image as a popular, competent public servant. This time there are no establishment dummies telling him to run – it’s just Rick Perry.

In a weird twist, the transcendent badness of Perry’s first White House run actually helps provide a rationale for this latest campaign. He’s facing the lowest possible expectations a candidate can face, so unless he stumbles out onto the debate stage with his head stuck in a utility bucket, he’ll earn credit for not being the perpetually semi-confused ninny he was during his last White House bid. And Perry works to capitalize on the fact that the bar for competence he must clear is insanely low. He emerged from the 2012 race with a reputation as an incurious lunkhead, so now he makes a big deal of how he’s “learning the issues” and “talking to policy experts” – just like a real big-boy candidate would! Reporters and pundits eat this crap up because they love a good “comeback” story, and Perry’s feeding them as much as they can handle.

That being said, the primary difference between Perry’s 2012 and 2016 campaigns seems to be that literally no one is overestimating his chances this time around. Perry is polling nationally at just north of two percent, which ordinarily wouldn’t matter so much at this point except that the crowded GOP field has forced the party to place restrictions on who they invite to participate in the primary debates. If Perry’s numbers don’t improve, he may not have a debate stage to stumble out onto, bucket or no.

Also, the Rick Perry of 2011 was, at the outset, a fundraising juggernaut. Rich people, many of them from Texas, threw money at him when he got into the race, and he outraised all the other Republican contenders in the first fundraising quarter for which he was a candidate. The Rick Perry of 2015, however, is approaching fundraising with a much more modest aim: scraping together enough to get by. As the Texas Tribune notes, he’s operating in a field with many more candidates this time around, including two others with Texas roots – Jeb Bush and Ted Cruz – who are competing for the same home-state donors he leaned on in 2011. And none of them are, like Perry, currently under indictment. As such, Perry is (in keeping with the broader campaign theme) carefully managing expectations: “Are we going to raise more than anybody? No. But the presidency's not something that's for sale.”

Faced with those limitations, Perry is doing what every longshot candidate for the White House does: he’s making one early-voting state the MOST IMPORTANT STATE and pouring everything he can into convincing its elderly white population to gamble on an underdog. In Perry’s case, it’s Iowa. Rick Perry spends a lot of time in Iowa – more than any other presumptive 2016 Republican, according to people who count such things. Not only does Rick Perry go to Iowa a lot, he also releases ads highlighting how much time Rick Perry has spent within the territorial boundaries of the state.

And has this obsessive focus on Iowa done him any good? Nope. Not at all. Right now he’s drawing roughly three percent in Iowa, and that number hasn’t budged all year.

Another big difference between 2012 and 2016 is that Perry looks like he’ll be much more aggressively anti-immigrant. Four years ago, Perry dismissed the idea of building a border wall and proudly defended a law he’d passed allowing in-state tuitions for undocumented immigrants. For 2015, we’re going to see Rick Perry the tough-guy governor who sent the Texas National Guard to secure the border last summer against malnourished and frightened Central American children. That’s all nonsense – the migrant crisis was largely over by the time the Perry’s National Guard troops arrived. But Perry is eager to take credit for saving America from undocumented immigrants and the terrorists who sneak into the country with them. (You probably won’t hear anything about Perry’s efforts to protect America from Ebola, since he kind of screwed that one up.)

So will Rick Perry be president? Probably not, no. But that’s no reason not to get excited about Perry 2016. He’s a man with something to prove and no incentive (or demonstrated ability) to evince anything more than the barest minimum of political intelligence. It should be entertaining.