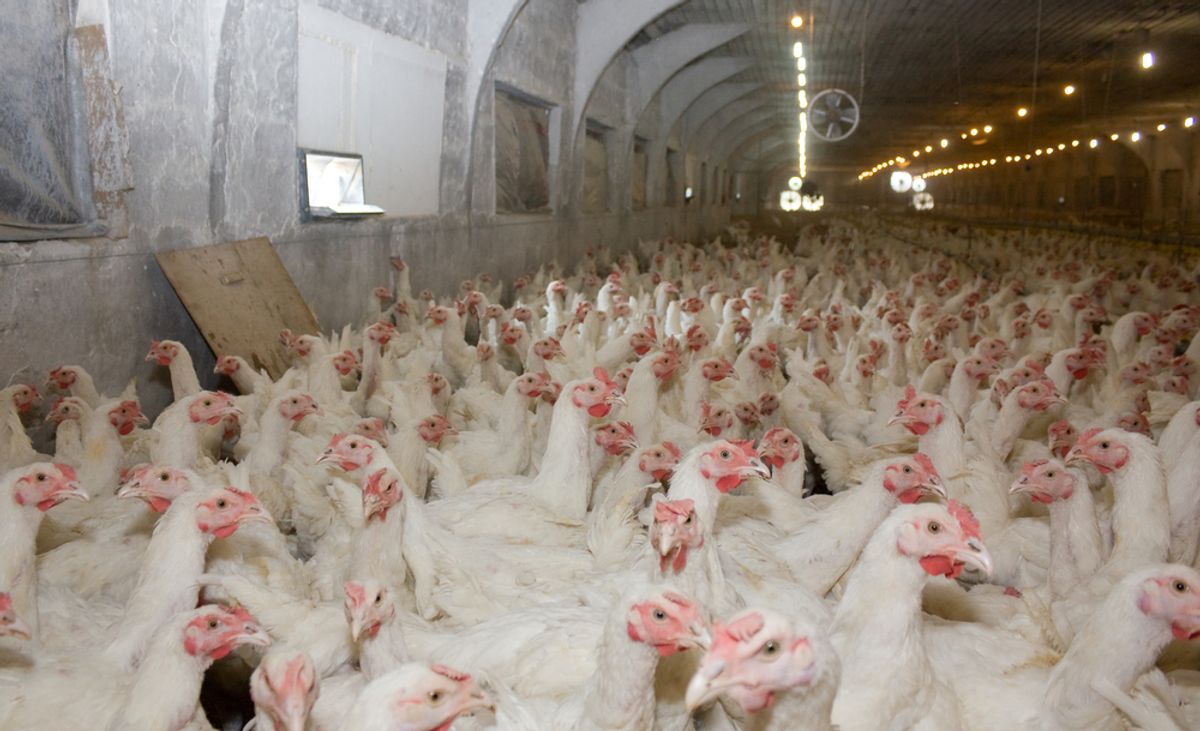 Up until now, there have been three main ways that states have tried -- in some instances successfully -- to keep the truth about what happens on factory farms hidden. In some, like Idaho, Kansas, Montana and North Dakota, it's illegal to take photos or video inside agricultural facilities. In others, like Iowa and Utah, it's illegal to lie on a job application: an undercover activist, for example, wouldn't be able to hide the fact that they're affiliated with an animal welfare group. And in Missouri, whistleblowers with evidence of abuse or illegal practices have to immediately turn that information over to authorities, effectively preventing activists from being able to build a case against a facility.

The bill that passed in North Carolina Wednesday when Senate Republicans overrode the governor's veto presents a fresh twist on that old standard: technically, it doesn't criminalize whistleblowers. But it does allow employers to pursue civil charges against any employees who take photographs, shoots video or steals data or documents, holding them responsible for any damages incurred -- including damages caused by the exposure of abuse -- as well as up to $5,000 per day in punitive damages. It is, Paul Shapiro, the vice president of farm animal protection at the Humane Society of the United States, told Salon, "a new type of ag-gag.”

It's a type that hands the power directly to the industry, a formidable force in North Carolina: there are some 50,000 farms in North Carolina, home to 800,000 cows, 8.6 million hogs (it's the country's second-largest hog producer) and nearly 800 million broiler chickens, and they have an influential, aggressive lobbying presence in the state. The bill's most prominent backer, the North Carolina Chamber of Commerce, represents industry giants like Tyson, Smithfield Foods, Pilgrim’s and Cargill, to name a few. Its supporters argued that its true intention is to prevent things like corporate espionage, organized retail theft and internal data breaches. But even if that were the case, it throws whistleblowers under the bus in the process.

"It really demonstrates just how much the meat industry has to hide," Shapiro said -- undercover videos have, in the past, exposed horrific abuses at factories within the state. Yet the response from lawmakers, he said, "isn't to crack down on the cruelty, it's to crack down on the whistle-blowing."

"It has a chilling effect," Shapiro added -- not least because its implications extend far beyond that of the factory farm. The AARP, for one, came out against the bill because it "extends to all industries including nursing homes, hospitals, group homes, medical practices, charter and private schools, daycare centers, and so forth." The Wounded Warrior Project spoke out against it as well: "As an organization dedicated to honoring and empowering injured service members," CEO Steven Nardizzi wrote in a statement, "we are concerned that this legislation might cause wrongdoing at hospitals and institutions to go unchecked." The N.C. Council for Women and the Domestic Violence Commission, meanwhile, pointed to cases where undercover recordings were used to uncover and prosecute human sex and labor trafficking.

North Carolina Gov. Pat McCrory, a Republican, recognized as much in his surprising decision last week to veto the bill. "While I support the purpose of this bill, I believe it does not adequately protect or give clear guidance to honest employees who uncover criminal activity," he said in a statement. "I am concerned that subjecting these employees to potential civil penalties will create an environment that discourages them from reporting illegal activities."

"It was between people and money, and money won," said Craig Watts, the North Carolina chicken farmer who earlier this year spoke out against abuses he witnessed while under contract for Perdue (and who saw first-hand the industry's propensity for retaliation). And it's going to raise new questions, he told Salon, for anyone who's considering going forward with something they've witnessed. "If you're sitting there with the very likelihood of a multibillion dollar company bringing the rain down on you through a lawsuit, it certainly is a deterrent," he said. "You basically have to ask yourself, 'Is it worth everything I own to do this?'"