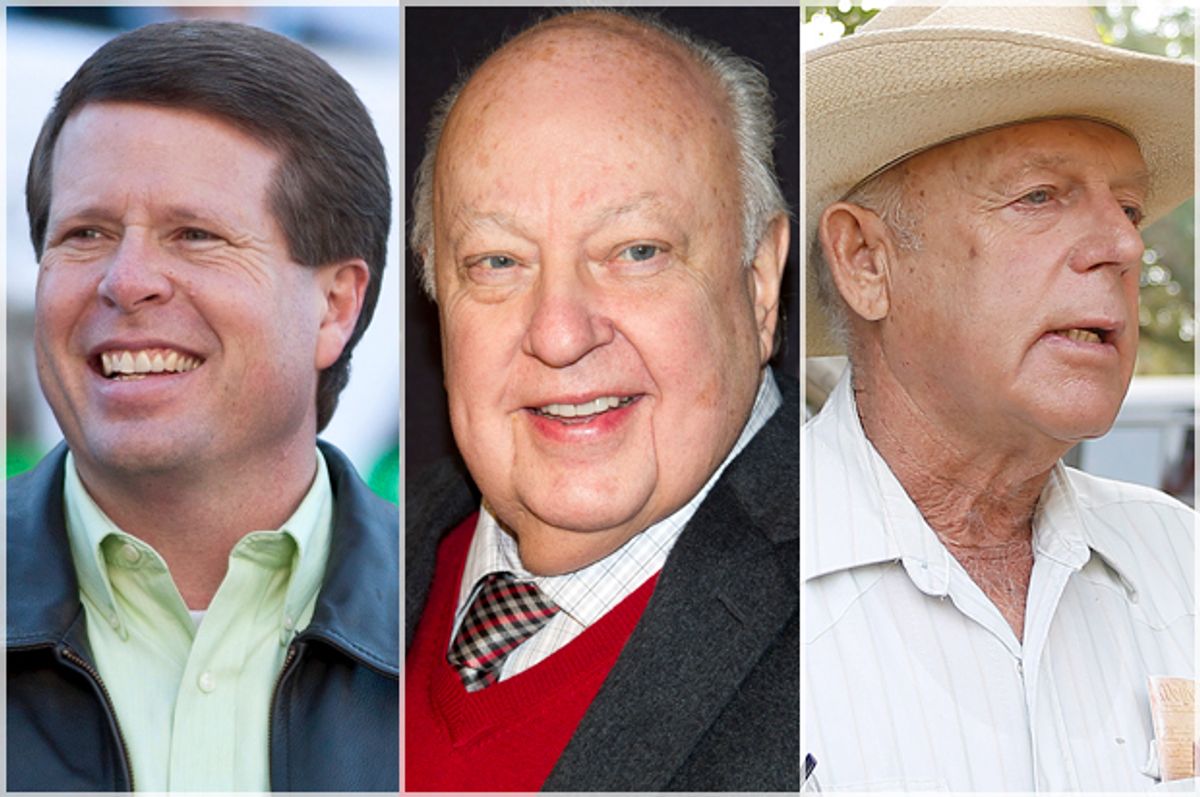 Megyn Kelly and Howard Kurtz are mad at me. Or at least, people like me. They’re angry at the “liberal media,” which they claim turned the sad story of the Duggar family sex abuse scandal into a “red-blue” issue, in the words of Kelly.

That’s hilarious. First of all, the Duggars made themselves a political issue when they became political activists, endorsing ever more right-wing candidates, crusading to deny LGBT people their rights, and accusing transgender folks of being “child predators.” The Duggars’ rights weren’t being infringed. No one tried to stop them from having 19 kids and counting.

I might make the case, now, that they had too many kids to care for properly, given the repeat abuse by son Josh of four of his sisters, including a five-year-old. I might make the case that their fundamentalist patriarchal view of family pathologizes normal sexual urges while making young women the property of their parents and then their husbands. But no one in authority judged them, or tried to stop them, or suggested parenting classes, or made sure their sons were being supervised and their daughters protected.

Now it’s Fox that’s trying to make the Duggars’ troubles a political issue, and it’s more evidence of how badly Roger Ailes has gotten off his own game. Increasingly, Ailes is trying to turn crackpot, fringe figures -- Cliven Bundy, the Duggars – into sympathetic stand-ins for the so-called "silent majority" he targeted, to great political success, in the late 60s and early 70s.  And it’s not working.

At their best/smartest, Ailes and his client Richard Nixon tapped into genuine angst felt by large numbers of Americans in the 1960s. They were never a majority -- although they probably were a majority of older white people, sadly -- nor were they entirely silent.  But this grumpy plurality believed that their values were being challenged and their lives were being changed. That was key to the white backlash that restored Republicans to power after Lyndon Johnson trounced them in 1964.

Leaving out whether it was fair, or overly animated by racism, millions of white people resented busing; believed removing prayer from schools was wrong; and worried about rising crime rates, the prevalence of divorce, and growing drug use. Ailes helped Nixon channel their worries into politics, and they took the white working class away from the Democratic Party, perhaps permanently.

The old magic doesn’t work as well any more politically. Since Ailes launched Fox in October 1996, Republicans have lost the White House in three of five elections (and lost the popular vote in a fourth.) Still, his grumpy plurality is large enough to make big profits for Rupert Murdoch, and trouble for Democrats.

Increasingly, though, Americans are comfortable with the cultural changes of the last 50 years. Fox has to work harder to find culture war heroes it can trumpet to rile up its audience. So they turn to crackpots like gun-toting welfare rancher Cliven Bundy, whom Sean Hannity tried to turn into the 21st century Patrick Henry. Then, of course, Bundy embarrassed Hannity and Ailes when he shared his entirely predictable racism, opening up to reporters with the never-promising line, “Let me tell you something about the Negro.”

Now Hannity’s star is fading, and Kelly’s is rising. That’s why I was disappointed, honestly, that she decided it would be a big career move to go after the Duggar freak show and try to turn the family into culture war martyrs. Many Salon readers will disagree with me, but I still think there’s something decent within Kelly that had to shrivel up sitting across from Jim Bob Duggar, listening to him defend his son’s actions as “not rape,” and play down his daughters’ abuse because most of the time, they were sleeping.

Whatever Fox and the Duggars' intent, I have to think the ratings stunt backfired on the family. The parents turned it into a pity-party. "We went through the most darkest times our family has ever gone through." Michelle Duggar said, "We were shocked, devastated. No parent is prepared for a trauma like that. There was so much grief in our hearts.”

Boo frickin' hoo, Michelle. They came off as irresponsible whiners blaming their troubles on their enemies and the media. I don't think it helped them keep their lucrative TLC show.

Of course, Fox's defenders will hit me with "Look at their ratings!" They’re down, but not as much as other cable channels. And hey, there's still a sizable group of aging white people who want to sit on their couches and hate on Obama. But I don't believe even most of those people are coming to Fox because they're championing the Duggars. Increasingly, the network's leaders are getting tone deaf and missing their own audience.

Which raises the question: When are good white Christian people going to rise up and tell Fox that the Duggars don’t represent them?