The 2016 contender's silly, incoherent, and self-contradictory neocon vision keeps tripping him up 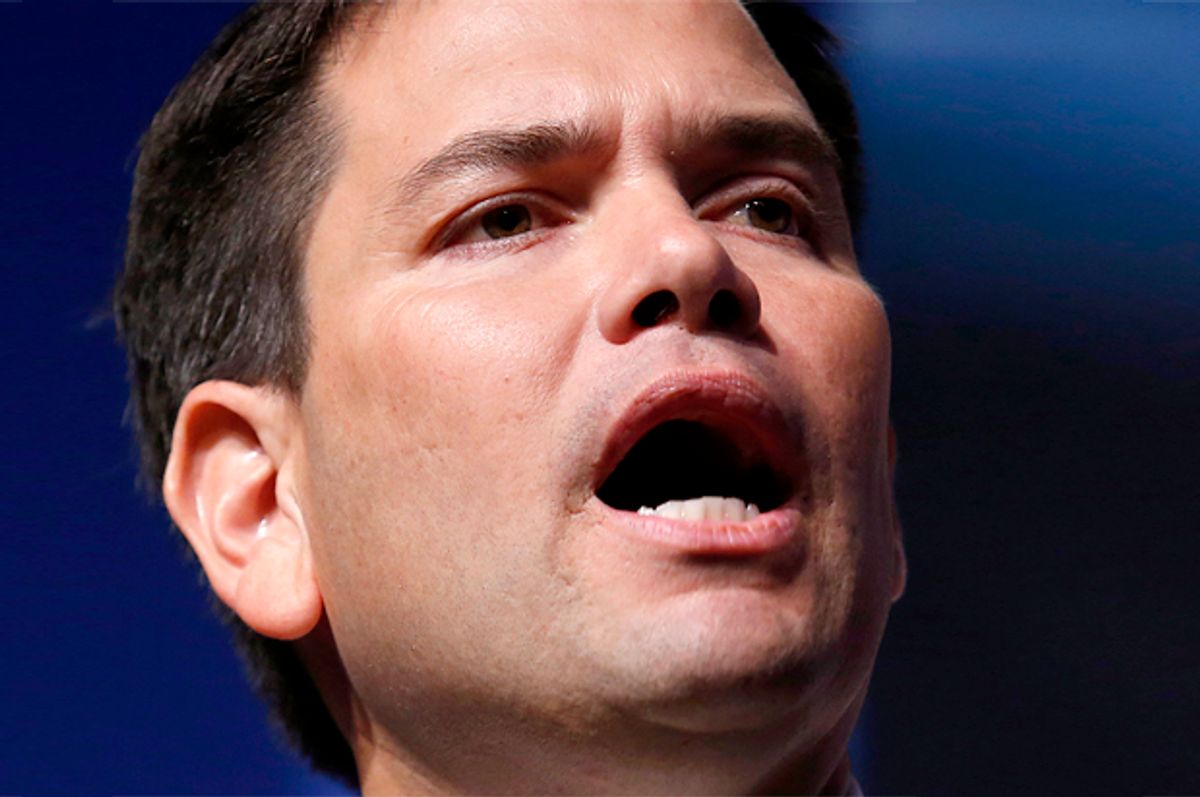 For someone who is running for the White House based on his supposedly sterling foreign policy credentials, Marco Rubio seems to have trouble forming coherent thoughts when it comes to Iraq. A few weeks ago, Rubio offered up a thoroughly nonsensical answer to whether he’d have supported the 2003 invasion of Iraq, explaining that he would have done it, but also that he wouldn’t have done it, but also that the invasion was totally worth it. And just yesterday on Fox News, he served up this beautiful nugget of incoherence on what he’d like to see happen in Iraq (courtesy of Business Insider):

RUBIO: The most immediate responsibility we have is to help them build a functional government that can actually meet the needs of their people in the short and the long term. And then ultimately, from that we would hope it would spring—

RUBIO: Well, it’s not nation-building. We are assisting them in building their nation. We have a vested interest in doing that.

The nice part about this is that you don’t have to go through the trouble of refuting it – Rubio did that himself. He wants the U.S. to help build a functional government in Iraq, but it’s not nation-building, it’s just helping them build a nation. That’s not his Iraq strategy, it’s just the strategy he’s formulated for Iraq. It’s brilliant.

Rubio is a straight-up neocon, but usually he is a bit slippier when it comes to endorsing George W. Bush’s foreign policy without actually copping to its many, many failures. What he said on Fox News yesterday doesn’t make sense on any level, but it does undermine his foreign policy vision. By calling for a renewed commitment to nation-building (or whatever he wants to call it) he’s acknowledging that the many lives, years, and billions of dollars we devoted to our last nation-building effort didn’t work. But President Rubio will do it better this time because he’s not nation-building, he’s “assisting them in building their nation,” or whatever.

So that was bad, but Rubio wasn’t quite done stomping all over his own foreign policy views. Like most Republicans, Rubio believes that we had actually “won” the war in Iraq by the time Bush left office, but then Barack Obama came in and withdrew all the troops and snatched defeat from the jaws of victory. He tried making that argument yesterday on Fox News and said something dumb:

RUBIO: What happened in Iraq under this administration is they rallied around Maliki. Maliki was the Shia leader who used his power to go after Sunnis. And that created the environment that was conducive for ISIS to come back in and create all these problems.

It was actually the Bush administration that first “rallied around” Nouri al-Maliki as prime minister of Iraq and propped him up as the country spiraled out of control. The troop “surge” that Rubio and his allies are so enamored of was implemented so that Maliki would have political space to promote reconciliation between warring factions within the Iraqi government. Maliki squandered that opportunity and instead used it to consolidate his own power and crack down on his rivals.

In the Rubio worldview, however, the fault for Maliki’s abuses lies solely with Obama. He argues that Obama should have left behind a small residual force of U.S. troops (that the Iraqi government refused to accommodate) to intimidate Maliki into not being the corrupt, petty despot that he was. That doesn’t make a whole lot of sense, given that Maliki wouldn’t be brought to heel even when U.S. troop presence in his country was at its height and he was under intense diplomatic pressure from the Bush White House.

But that’s the heart of the Rubio foreign policy position: the neocon dream of nation-building works, just so long as you don’t call it nation-building and completely disregard all the very recent evidence of it not working.