Kelly's interview with the sisters had a much different tone than Wednesday's with the Duggar parents. Here's how 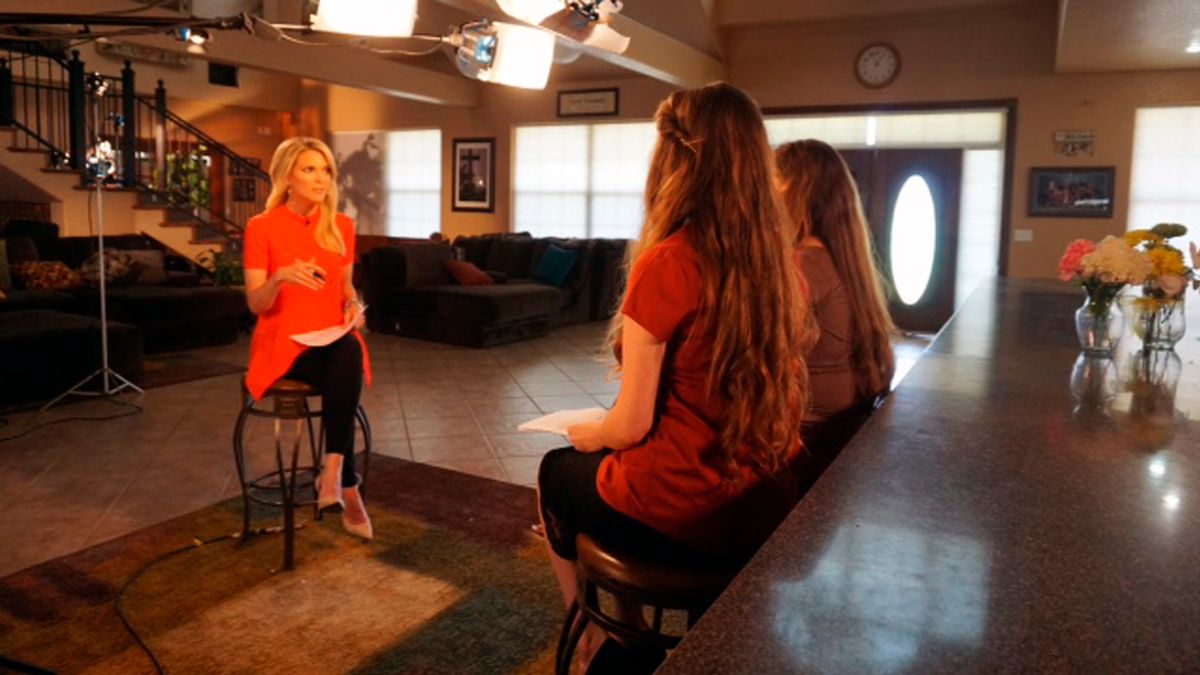 Two of the Duggar sisters who were molested by brother Josh Duggar told their stories to Megyn Kelly last night, in an interview that was often heartbreaking -- but also filled with forgiveness and a strong defense of their brother and the way their parents handled the situation in the home.

The sisters told Kelly that they did not know what was had happened until their parents later told them about. Jessa Duggar said that while her brother's actions were "not permissable," that he was not a child molester or a pedophile. Jill Duggar said they were speaking out to set the record straight. And both were critical of tabloid media coverage and angry about the invasion of their privacy.

Here are the seven most crucial exchanges -- six between the Duggar sisters and Kelly, and then one from Fox's post-interview analysis with "media critic" Howard Kurtz.

1. Josh was "a little too curious about girls"

MEGYN KELLY: You are going on the record as being two of Josh's victims.

KELLY: It feels strange to you, that word?

DILLARD: You know, I think we didn't choose to come out and tell our story. This wouldn't have been our first choice. But now that the story has been brought about, we really feel like as we've been seeing these headlines, as we've been seeing things that people are saying about our family, we feel like as victims we have to come out and speak. This is something like we chose to do. Nobody asked us to do this. Jessa and I were talking and we were like, oh, my goodness, most of the stuff out there is lies, it's not true. And so for truth sake, we want to come out and set the record straight.

KELLY: When I said, you know, "victims," you furrowed your brow a little bit. Do you feel like the victim of a molestation?

JESSA DUGGAR SEEWALD: Well, I think in the case of what Josh did, it was very wrong. I'm not going to justify anything he did or say it was okay. Not permissible. But I do want to speak up in his defense against people who are calling him a child molester or a pedophile or a rapist some people are saying. That is so overboard and a lie really. I mean, people will get mad at me for saying that but I'm like I can say this. You know? I was one of the victims, so I can speak out and I can say this and set the record straight here. Like in Josh's case he was a boy, young boy in puberty and a little too curious about girls and that got him into some trouble. And he made some bad choices but really the extent of it was mild inappropriate touching on fully clothed victims. Most of it while girls were sleeping.

KELLY: You said you were feeling angry. But do you get the chance to express that anger to him? Did you fight?

SEEWALD: No. I think for us our situation is so different than most girls in that he was -- he's very subtle anyway. Like he knew in his mind my actions are wrong and I have bad intentions but he was very sly, like the girls didn't catch on, you know. It was like, okay, if you catch the girl sleeping, you know, like a quick feel or whatever. Or it's like, you know, if you're just not really aware, you know, in the situation that happened when the girls were awake, it's like they weren't aware what was happening. It was very subtle. And so I think that for us it's like, okay, we realize this is serious -- but at the same time it wasn't like a horror story or like this terrible thing.

KELLY: That's one of the headline covers, "House of Horrors."

KELLY: That is not how you view it?

SEEWALD: No. And I think my parents, they acted, I can see looking back as an adult, now they handled the situation very well. They set up safety guards in our house. And, you know, they sent Josh away.

3. "We're not going to do this hide and seek thing where two people go off and hide together"

KELLY: Did you feel scared at all that he might resume?

DILLARD: You know, when this happened, when my dad and mom sat down with us and shared what happened and Josh asked us to forgive him, we had to make that choice that I think everyone has to make and my dad explained to us, he said you know there's a difference between forgiveness and trust. That's not the same thing. You know, you forgive someone and then you have boundaries. Forgiveness with boundaries and so trust comes later. You know, Josh destroyed that trust at the beginning, and so he had to rebuild that. And so I think when he came back, that was his -- that was his point of, okay -- well, actually, when he asked us to forgive him, that was the point of rebuilding.

KELLY: That was the beginning. What were the safeguards that were put into place just to make sure?

DILLARD: I was going to say not, you know, being alone. My parents said, okay, we're not going to do this hide and seek thing where two people go off and hide together -- and not baby-sitting the girls.

KELLY: At night in your room?

DILLARD: Locks on the doors, you know, everybody's in bed, girls in the girls' room, boys in the boys' room. And so, yes. And as a mother now, I look back and I think, you know, my parents did such an amazing job. For me, even when we went through the DHS investigation, they complimented my parents on what an amazing job they did through that process. And so, I think not only taking the legal actions that they did and then going the extra mile and I see as a mom I hope that I can set the same safeguards in my family that they did and, you know, reaching the heart of their children. And not only trying to take care of Josh but us girls.

4. The hypocrisy defense: "People are making this sound like it happened yesterday"

KELLY: What about, you know, some of the family's critics would argue why you put your neck out there because not only did you go on TV but you advocated strong Christian values. And now critics are saying you've essentially waved your right to do that, not you the victims necessarily but the family shouldn't have been out there doing that since they knew what had happened. Is that fair?

DILLARD: With lots of kids, that has 20 times more, you know, people in our family, so.

KELLY: How about Josh? How about Josh though? He's been out there, you know, with the Family Research Council, talking about family values and suggesting that certain lifestyles are not appropriate, in particularly the gay and lesbian lifestyles.

SEEWALD: Right. I mean, it's right to say, here's what I believe, here's my value. Even if you've made stupid mistakes or failures if you've had failures in your past, it doesn't mean you can't be changed. And I think that's where -- I think the real issue is people are making this sound like it happened yesterday.

5. "They're just used to making objects out of women and maybe we just didn't seem any different"

KELLY: hen you found out this was going to be on the cover of "In Touch Weekly," what was your reaction?

SEEWALD: We were not happy.

DILLARD: I called my husband and I was in tears. I couldn't believe what was going on. Whenever I heard the police reports had been released, that I said what -- like they didn't have the right to do this. We're victims. They can't do this to us.

KELLY: And yet they did.

DILLARD: And they did.

SEEWALD: A system that was set up to protect kids, both those who make stupid mistakes or have problems like this in their lives and the ones that are affected by those choices, it's just -- it's greatly failed. And for us it's like go to the store and there's your picture on a magazine or whatever and you're like --

DILLARD: And they're like, you know, whatever thing they might say, you know, legally, we can do this. ...  There may be an agenda. I mean, I know that the tabloids that released it, you know, they're used to exploiting women. They have this parent company --

6. "People that already don't really like our family would be the ones to really spread this around"

KELLY: We've seen so many in this country stand up on behalf of child victims. We've seen very little of that in -- with respect to your case, in your privacy rights and the violation of the hose promises that your record and your testimony would be sealed. Do you think it has something to do with who you are -- who the Duggars are? What your (family) stands for?

SEEWALD: I definitely feel like people that already don't really like our family would be the ones to really spread this around and maliciously do so, slanderously do so. Definitely, they didn't have the victims in mind.

DILLARD: And I feel.

SEEWALD: People that are like -- I feel for the girls and like, "No, you really don't because if you did, you would - you would respect our wish for things to remain private." And that's just - I mean, that's been a violation of trust.

HOWARD KURTZ: I have to ask the moral question. Why is it OK for "In Touch Weekly" and then every other media outlet on the planet to violate an ironclad rule of journalism and essentially identify these young women?

KELLY: They did because they revealed that it was the sisters. And it doesn't take a lot of math to figure out who was, what age at the time, and who is in that police report. And we're supposed to follow this code where we don't do that. And what happened to the code? Is it that this is a Christian outspoken family that does pass judgment on certain people's lifestyles? I get it. But I didn't see that exception in the ethics book.

KURTZ: Yeah, absolutely. And I think that, you know, maybe there was a sense that this is a reality show, these people put themselves out there, there they preach Christian values, they're hypocrites, they're fair game. But, you know, it all seemed very abstract when the media were kind of lapping up this admittedly, you know, riveting story about Josh Duggar and family and the show and the -- and the molestation. But when you look at those two young women, who as you say, one a new mother, one about to be a mother, you know, it's almost like they were collateral damage, nobody thought of them.

Fox News has video from the show here.