Social media still gets too much credit for the Arab Spring and social change. Change needs people, not just tech 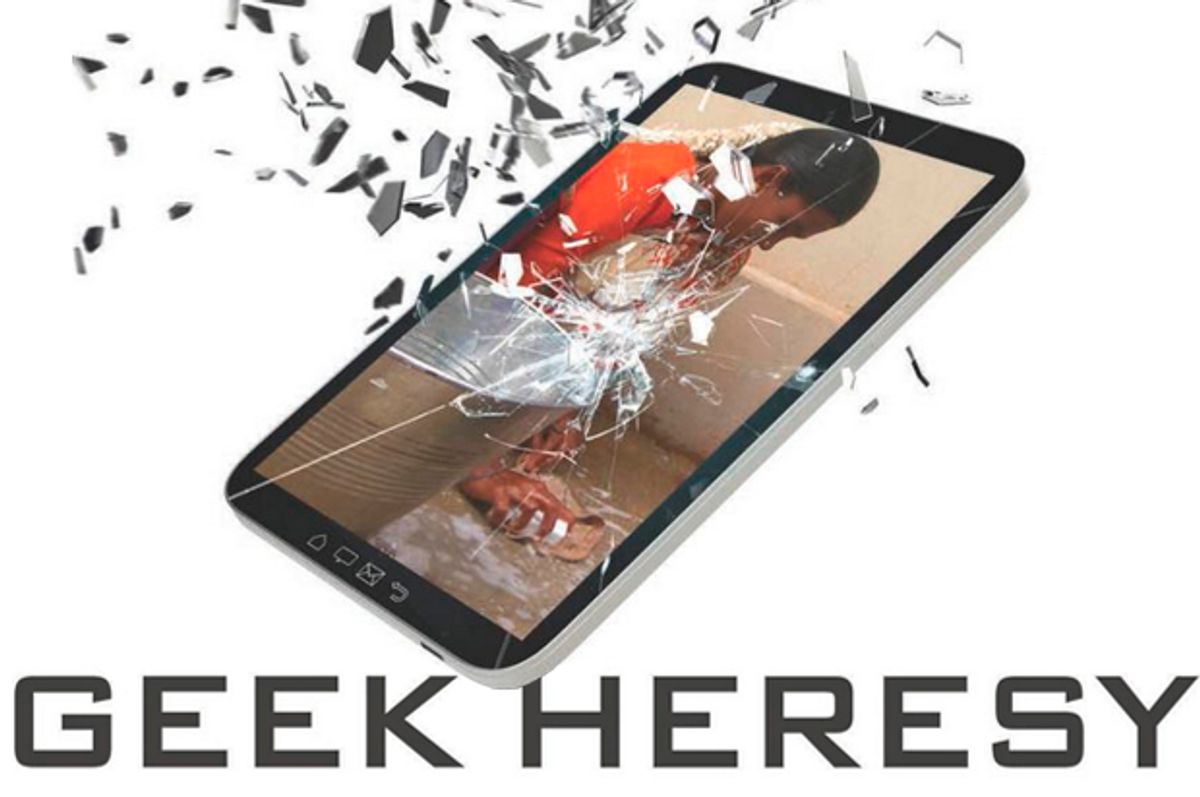 Excerpted from "GEEK HERESY: Rescuing Social Change From the Cult of Technology"

In what is now a well-worn story, Wael Ghonim, a thirty-year-old Google executive, used Facebook to help organize the protests that toppled Hosni Mubarak in Egypt. Today, it’s hard to speak of the Arab Spring without calling to mind the phrase “Facebook revolution.” In early 2011, Facebook had roughly 600 million users. Almost 10 percent of the world population was on it. Speculations about its initial public offering swirled, and The Social Network, a movie telling one version of its origins, was in theaters. With this buzz ringing in their ears, journalists and bloggers were agog over Facebook’s role in Egypt.

A day before the January 25 protests, Time asked, “Is Egypt about to have a Facebook Revolution?” It cited the 85,000 people who had pledged on Facebook that they would march. Days after the first protest in Tahrir Square, Roger Cohen wrote in the New York Times, “The Facebook-armed youth of Tunisia and Egypt rise to demonstrate the liberating power of social media.” One Egyptian newspaper reported that a man named his firstborn daughter Facebook.

On February 11, 2011 – the day the regime folded – Ghonim told a CNN interviewer, “I want to meet Mark Zuckerberg one day and thank him. . . . This revolution started on Facebook . . . in June 2010 when hundreds of thousands of Egyptians started collaborating content. We would post a video on Facebook that would be shared by 60,000 people on their walls within a few hours. I’ve always said that if you want to liberate a society, just give them the Internet.”

If you want to liberate a society, just give them the Internet. This is a classic statement of technological utopianism. As in the Star Trek future, where technology eradicates hunger and poverty for humanity, Ghonim is saying that the Internet eradicates autocracy. Coming from someone directly involved in the revolution, it seems impolite to refute. But just as with the hype around technology for education, the case for social media as an important cause of democratic change vanishes under critical inspection.

First, let’s accept that in Egypt, and earlier in Tunisia, social media contributed to the overthrow of dictators. We’ll come back to exactly what that contribution was, but there’s no doubt that YouTube videos and Facebook posts played a part.

But in other Middle Eastern countries, events unfolded differently. Consider Libya, for example. On February 18, 2011, just days after the rebellion started, Muammar Gaddafi dimmed communication networks in his country.  Maybe he had heard about the Facebook revolution next door and didn’t want one in his own country. He disabled most of the Internet in Libya and did the same for phone services, mobile and landline.  The rebels, though, managed to coordinate nevertheless. Far from ceasing their activities, they kept fighting. Soon after, they overwhelmed Gaddafi’s forces, tracked him down, and executed him in the streets.

In Syria, President Bashar al-Assad took a cue from Gaddafi. When protests began, he shut down the Internet nationwide and selectively disabled phone networks to hinder rebel communications.  Protests, though, continued, leading to an all-out civil war, with the rebels showing no signs of quitting even four years later. Media portrayal of Syria has long since stopped mentioning Facebook, Twitter, or YouTube.

Meanwhile, in Bahrain and Saudi Arabia, something very different happened. A few public protests were quashed in Bahrain, and the Western press hardly noticed the feeble activism in Saudi Arabia. Importantly, it wasn’t for a lack of social media organization. Encouraged by the Tunisian and Egyptian revolutions, a spate of petitions and videos circulated in Saudi Arabia via Facebook and Twitter. They called for an end to absolute monarchy. But these online actions were squelched by offline forces, as reported by Madawi Al-Rasheed, a specialist in Islamist movements and Middle Eastern civil society. One young activist, Muhammad al-Wadani, uploaded a YouTube video urging democracy. He was promptly arrested. Two online petitions demanding constitutional monarchy received thousands of signatures. They were ignored. A group calling itself the National Coalition and Free Youth Movement attempted to organize online. It ended up in a game of virtual Whac-A-Mole as regime security took down its websites one after the other. Protests planned on social media led nowhere.

The goal of these and other Web-based appeals was a physical protest, a “Day of Rage” on March 11, 2011. But, as Al-Rasheed wrote, “things were quiet” on the day itself: “Security forces spread through every corner and street. An unannounced curfew loomed over Riyadh and Jeddah.” No protests worthy of international attention materialized.

Al-Rasheed argued that the Saudi monarchy has starved civil society in the kingdom for decades. There are no trade unions, no political parties, no youth associations, and no women’s organizations. Demonstrations themselves are forbidden outright. As a result, grassroots organizational capacity is stunted. This is in direct contrast to Egypt, for example, where trade unions, nongovernmental organizations, and the Muslim Brotherhood all simmered as potent political forces despite Mubarak’s oppression.

The absence of protest is a non-event, so it goes unreported by mainstream news organizations. But an accurate understanding of social media’s role in revolution must account for the stillborn protests of Bahrain and Saudi Arabia as much as for the successful uprisings in Tunisia and Egypt.

Did America Have a Lantern Revolution?

Combining the lessons of Tunisia, Egypt, Libya, Syria, Bahrain, and Saudi Arabia, we come to an undeniable conclusion: Social media is neither necessary nor sufficient for revolution. Claims of social media revolutions commit the classic conflation of correlation and cause. To say that the Arab Spring was a Facebook revolution is like calling the events of 1775 in America a lantern revolution thanks to Paul Revere: “One, if by land, and two, if by sea.”

Actually, the tale of Revere’s lanterns is itself the stuff of myth. In reality, the lantern signal was just a backup plan in case Revere was arrested and unable to sound the alarm. What this story actually illustrates is that revolutionaries are contingency planners who exploit every tool at their disposal. In a telling interview about his involvement in Egypt, Ghonim noted, “They shut down Facebook. But, I had a backup plan. I used Google Groups to send a mass-mail campaign.” Presumably, had email also been blocked, he’d have resorted to phone calls, paper notes, and word of mouth – using the same communication tools as the 80 percent of Egyptians who have never been online. Of course, for Ghonim, “technology played a great role” – it would have been much harder for him to organize door to door. But it seems unlikely that the absence of Facebook would have prevented his activism altogether, or could have kept the rest of the country mute. Taking the broader view, Facebook was a tool of convenience for angry activists spreading the word by every available channel.

A few people tried to debunk social media’s revolutionary powers. For example, just as Mubarak’s regime was crumbling, Evgeny Morozov’s book The Net Delusion was released. Though Morozov couldn’t have known of Egypt’s fate while he was writing the book, he provided some of the most insightful commentary on technology’s role in Middle Eastern uprisings. His first chapter mocks the breathless hype around a supposed Twitter revolution in 2009 Iran – hype that led Hillary Clinton’s State Department to ask Twitter to postpone routine maintenance during the height of protests. (Twitter complied, and Clay Shirky wrote, “This is it. The big one. This is the first revolution that has been catapulted onto a global stage and transformed by social media.”) Morozov, however, cites low numbers of actual Twitter users in Iran at the time (perhaps all of sixty) and Iranian denials that Twitter had much of a role in organizing protests. He argued that Twitter was less an effective tool of protest and more a way for the outside world to eavesdrop on the events. For him, the social media narrative recalled Cold War ideas that capitalist technology would triumph over communist inefficiency, as if people in the Middle East couldn’t have rebelled on their own without the gifts of American entrepreneurs. In the end, whatever was tweeted, there was no Twitter revolution in Iran.

Also among the skeptics was Malcolm Gladwell, who had previously picked a fight with Shirky over the latter’s rhapsodies about social media. Gladwell pointed out that in the 1980s, East Germans barely had access to phones, much less the Internet, and they still organized, protested, and brought down the Berlin Wall. Of the Arab Spring revolutions, Gladwell wrote, “Surely the least interesting fact about them is that some of the protesters may (or may not) have at one point or another employed some of the tools of the new media to communicate with one another.”

As the critics gained momentum, social media proponents fought back. Most were chastened but insisted that social media still mattered in some important way. One reporter writing for CNN hedged, “Yes, of course, technology alone doesn’t make revolutions. . . . But that doesn’t mean social media cannot provide wavering revolutionaries with vital aid and comfort.”

What none of the commentators were providing, though, was a good framework for understanding technology’s role, and that’s where what I think of as the “Law of Amplification comes in”: Technology is put to use according to underlying human intentions, and the degree to which technology makes an impact depends on existing human capacities. In other words, technology’s primary effect is to amplify human forces. This explains how social media contributed to successful revolutions in some countries but not others, and how it can simultaneously be a supporting factor without being a primary cause.

In Tunisia and Egypt, citizen frustration and organized groups existed long before social media. Mubarak was in power for nearly thirty years, overseeing a stagnant economy under a “democracy” that had no one fooled. That frustration coalesced within existing civil society organizations and found amplified expression on Facebook. Leaders of the rebellion saw their organizing power extended by social media. Overall, technology probably accelerated the pace of revolution. In Bahrain and Saudi Arabia, civil society was crippled, so no amount of Facebook organizing made a difference. Technology doesn’t amplify human forces that aren’t there.

Even Ghonim later acknowledged, “I am no hero. . . . The heroes were the ones who were in the streets, those who got beaten up, those who got arrested and put their lives in danger.” There is no protest without citizen frustration. There is no rebellion without a sacrifice of personal safety.

Amplification as an idea is hardly novel. In a 1970 paper on the “knowledge gap hypothesis,” the authors reported that public-service messaging delivered through mass media was better absorbed by wealthier, more educated households. Lewis Mumford, a prominent twentieth-century technology critic who was part skeptic and part contextualist, wrote a two-volume work called The Myth of the Machine, in which he mentions in passing that technology “supported and enlarged the capacities for human expression.” And Philip Agre, a computer-scientist-turned-technology-analyst, wrote prescient articles about the Internet in politics. “The Internet changes nothing on its own,” he told us, “but it can amplify existing forces.”

But if amplification isn’t new, it is completely underappreciated. It’s all too easy to fall into the trap of thinking that technology adds a net positive benefit regardless of the human forces underneath. The lesson of amplification, however, is that even in a world of gadgets, social change depends on people first.

Excerpted from "GEEK HERESY: Rescuing Social Change From the Cult of Technology" by Kentaro Toyama (on sale May 26, 2015).  Reprinted with permission from PublicAffairs. All rights reserved.

Kentaro Toyama is W.K. Kellogg Associate Professor at the University of Michigan's School of Information and a fellow of the Dalai Lama Center for Ethics and Transformative Values at MIT. He lives in Ann Arbor, Michigan.