Nick Offerman: Jeff Tweedy is the best songwriter of my generation -- and I want to marry him 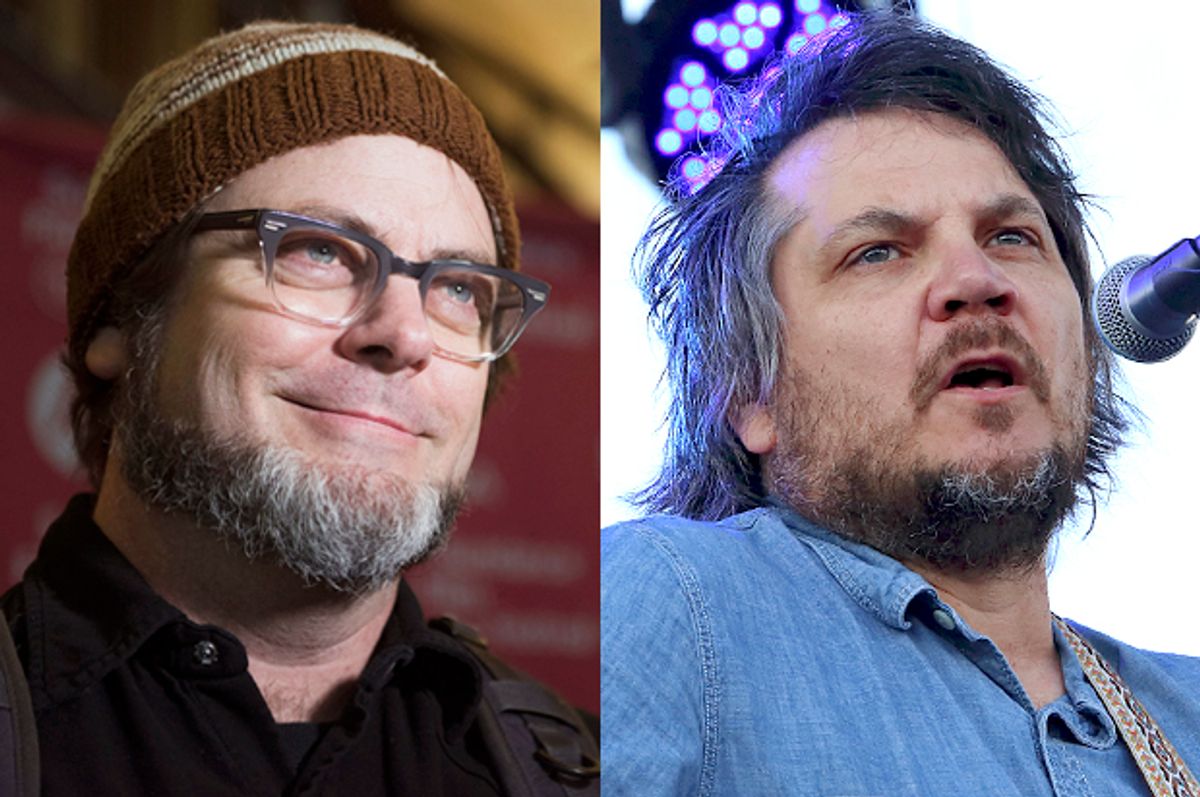 Excerpted from "Gumption: Relighting the Torch of Freedom With America's Gutsiest Troublemakers"

If you look him up on the Wikipedia website, the entry begins like this: “Jeffrey Scot ‘Jeff’ Tweedy (born August 25, 1967) is an American songwriter, musician, record producer best known as the leader of the band Wilco.” I don’t recommend you do look there, as there are two perfectly good books about Jeff and Wilco, and I would always encourage you to eschew the computer in general, not to mention—that website is weak and yields inconsistent information.

First of all, the grammar is for shit. Somebody who can tolerate monkeying with computers, please go in there and put an and in front of record producer. Number two, they are burying the lede by a country mile. Jeff Tweedy is really nice. Jeff Tweedy is really smart. And Jeff Tweedy is really, really cute. He’s what the young ladies of a bygone era would refer to as a “dreamboat.” For my money, he’s also the preeminent American singer-songwriter of my generation. Finally, I would add that I am in love with him. We are getting married. The end.

Just kidding, guys. Just joshin’ around. But not really.

He is already married to a champion named Sue, and I am also already married, to a champion named Megan. Plus, Jeff and I are heterosexuals. Strike two. If it weren’t for these formidable obstacles, then we would probably be together already and be very happy, but I guess since that’s not in the cards, I will have to be satisfied with writing this chapter about him and also being his pal.

Like most humans, I am very moved by music. It can rile me up or make me incredibly happy, or it can move me to tears, all with a commensurate amount of relish. Music shared among friends and family, I have found, is one of the most powerful bonding methods we have as monkeys who can wear jean shorts and press “play” on our music devices with our handily opposable thumbs and fingers. So when Pat, Pat, and Paul brought me Wilco, in the form of their first two records, "A.M." and "Being There," I was born anew. Jeff Tweedy’s music spoke to us, and much of the eared world, with a compelling relevance. It was clearly our music. How did he do it? How could he see inside me? Little did I realize that I was enjoying the song stylings of my future husband.

As I had recently moved to L.A. from Chicago, the town that Jeff Tweedy has called home for twenty-five years or so, his lyrics inspired in me a strong tendency toward nostalgia for my recent years in the Windy City, which had been immensely satisfying on an artistic level. At the time, I was still very good at smoking, so the lines “When you’re back in your old neighborhood / The cigarettes taste so good / But you’re so misunderstood / You’re so misunderstood” really pushed my fond-memory button. With good reason, it turns out, as Mr. Tweedy grew up in a geographical circumstance quite similar to my own. His hometown of Belleville, Illinois, was proximate to St. Louis in the same way that my village of Minooka, Illinois, was close to Chicago. We both felt out of place, or “Misunderstood,” in our conservative communities, and so we turned to the arts as an escape route to the world at large.

In the late eighties, Jeff met his future wife, Sue Miller (just the sort of charismatic lady you want to be in charge of things), when she was booking bands at the Cubby Bear in Chicago. Sue subsequently operated the legendary rock club Lounge Ax in Chicago’s Lincoln Park, which quickly became the premiere venue for taking in the most enervating new indie rock acts, including Tweedy’s band from Belleville, Uncle Tupelo. My pals and I enjoyed the bar for the killer music (like Adelstein’s band, Doris) and the cheap, cold longnecks, so there’s a good chance that Jeff and I spilled beer on each other at Lounge Ax in the early nineties, although Cupid was clearly not ready for our two hearts to beat as one just yet.

Tweedy, like Dylan, has the knack of composing and delivering his poetry so that everybody feels as though it’s about him or her personally. When his album "Summerteeth" came out in 1999, with the particularly dark poetry of “Via Chicago,” we couldn’t stop playing it over and over again at the house in Silver Lake we called Rancho Relaxo (cribbed from The Simpsons). Wilco’s subsequent records have only served to deepen my discipleship.

The music of Wilco, once they distanced themselves from the slight Uncle Tupelo flavorings of their penetrating first record, "A.M.," has been delightfully mercurial through the years. It changes and transmogrifies, much like, well, a maturing human personality. One noteworthy peak across the ridge of Wilco mountains is the story of their 2002 release, "Yankee Hotel Foxtrot." Sam Jones made a swell documentary film about this juncture in the band’s career, called "I Am Trying to Break Your Heart."

Jeff Tweedy and company were making some excellent new noises with the exploratory songs on the record. Unfortunately, the new bosses at their label, Reprise Records (a division of AOL Time Warner) were not remotely looking for any adjectives like “new” and “exploratory.” Despite the fact that Reprise had paid Wilco to produce the record, it looked like the band might get dropped. Industry insiders were astonished at this bullheaded corporate move, as Wilco had become one of the last great original American bands—the kind of trailblazing artists who would attract other acts to Reprise if they played their cards right. Well, as you might have guessed, Reprise, shrugged, dropped their drawers and took a shit on their cards. At the last second, having gotten wind of the bad PR that would be generated by their split with Wilco, they gave them back the rights to "Yankee Hotel Foxtrot" for free.

Tweedy and the band reached into their reservoir of gumption and made the album’s tracks available online at a high quality, so that it wouldn’t be pirated in a lower-quality audio file format, which yielded a great deal of traffic. Wilco then set out on tour and found that, not only were they were selling out, but fans were singing along to the new tracks, evidence that their gambit had struck pay dirt. Once news of this reaction got around, labels were lining up to sign the band and release the record. Jeff ended up choosing Nonesuch, a small label that happened to be under the very same AOL Time Warner umbrella. Nonesuch agreed to purchase the new record, meaning that the noble troubadours of Wilco had produced an exciting, new, and creative rock-and-roll album, paying no heed to current fashion or radio popularity, as they never have, and they got AOL Time Warner to pay them for it. Twice.

That kind of happy ending doesn’t seem to happen to artists who are striving for fame and fortune. By sticking to their creative guns, Wilco ended up being rewarded exponentially more than they would ever have had they been trying to produce radio hits or merely capitalize on their cute faces. Especially Jeff.

Excerpted from "Gumption: Relighting the Torch of Freedom With America's Gutsiest Troublemakers" by Nick Offerman. Published by Dutton Books, a division of Penguin Random House. Copyright 2015 by Nick Offerman. Reprinted with permission of the publisher. All rights reserved.