The radical notion that women can pursue their own grand TV destinies: "Halt and Catch Fire" finds its voice by focusing on women in tech 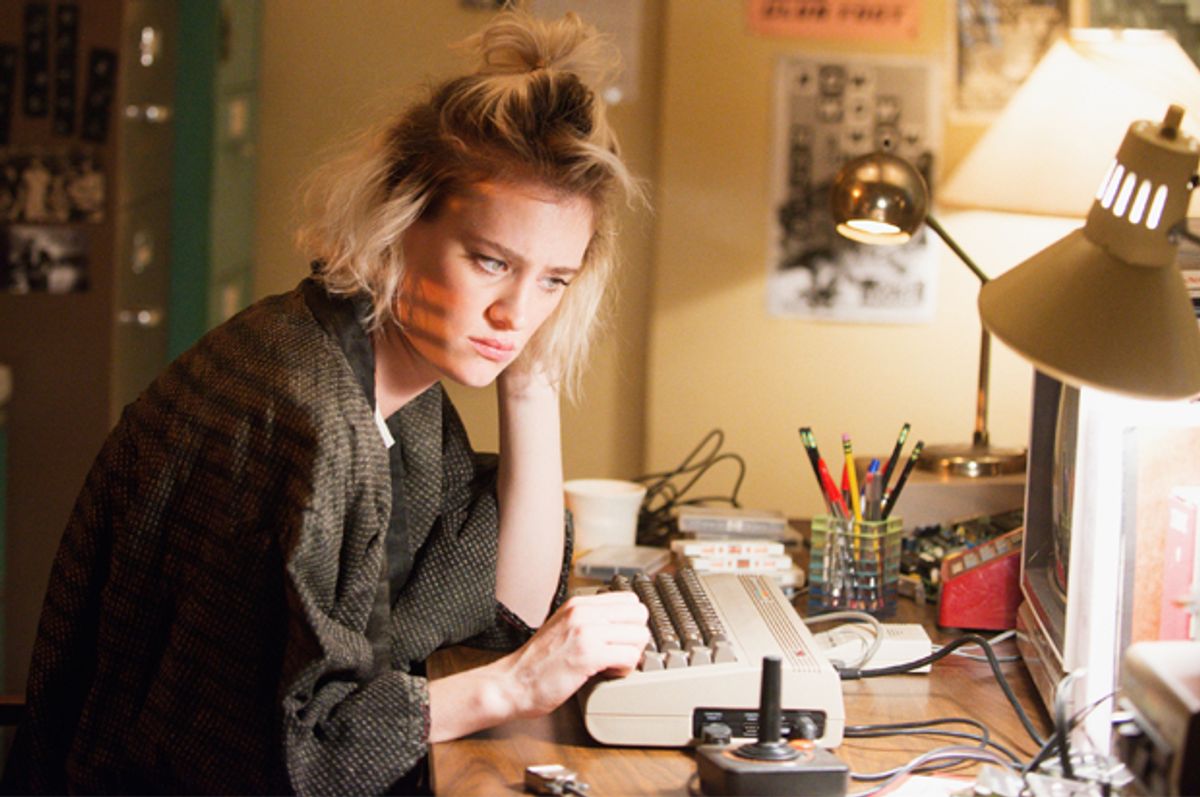 This season of “Halt and Catch Fire” has an exuberance the first season struggled to reach, and it’s because of a storytelling device that has more popularity in fan fiction archives than Hollywood studios: the gender swap. It’s a thought experiment that pops up in fervent fandoms, ones that are also eagerly reimagining beloved characters in different settings or with new adventures. The gender swap is even simpler than any of that—it merely asks, well, what if all the female characters were men, and the male characters were women? What might change about them? What might stay the same?

As with so many elements of fandom, it’s casually subversive—a re-creation that grapples with the social construction of gender and imagines its infinite fluidity. And as with so many elements of fandom, it is a long-standing tradition—one that Shakespeare made regular use of in his plays, which itself was a commentary on the fact that all the female roles were played by men. As storytelling, though, it’s not always cogent. Even for Shakespeare, swapping genders just because you can isn’t story, it’s stunt. And on television, it’s understandably kind of difficult to get average viewers on board with a new episode of “Downton Abbey” where Lady Mary is all of a sudden dressed in a smart waistcoat and trousers, going by “Lord Mark,” and Cousin Matthew is instead distant, middle-class cousin Mattie, taking on the daring task of riding a bicycle while wearing a dress and three petticoats.

But what you do see happening in mainstream narratives is the gender-swapping of characters’ roles, if not of the characters’ genders, themselves. It works best in a setting that has traditionally quite strong gender roles. “Mad Men,” for example, did this with Peggy (Elisabeth Moss), starting out by writing her character into the cookie-cutter secretarial role before inserting her into the traditionally male role of copywriter and creative director. She was swapped, and in later seasons, her relationship with Stan (Jay R. Ferguson) highlights that—he’s her employee, content (mostly) with not being in charge, and more naturally maternal and sensitive than Peggy ever demonstrates. Especially in the 1960s, it’s an illustrative dynamic, one that is thoroughly at odds with nearly every other relationship in the series. (Joan is so stymied by the era that she ends the show as she began it: single.)

And for an entirely different example, take  “Mad Max: Fury Road,” the post-apocalyptic action film that has dominated critical conversation in the weeks since its release. There’s so much to say about the film, but above all, what’s astounding is how the film upends—reverses—the prevailing ideas of what a male character is supposed to do versus a female character. As my friend Genevieve Valentine wrote for the Dissolve, “’Fury Road's" plot is nothing special. (It is, in effect, a gloriously kinetic U-turn.) Its narrative interest stems from the shift it brings to the context of the desert itself, from Max’s masculine to Furiosa’s feminine.” The narrative U-turn is in part a manifestation of the film’s emphasis on reversal—it’s Imperator Furiosa (Charlize Theron) who is the action-star hero, not Mad Max (Tom Hardy). It’s not just a revealing commentary on gender, it’s a vision of a different, better world, made from the ashes of one much worse.

Texas in 1984, the setting of AMC’s “Halt and Catch Fire,” isn’t exactly post-apocalyptic America—but then again, it’s not so far off, is it? Desert still reaches to the horizon, and even worse, patches of suburbia bloom like mold, in green-and-brown enclaves amid the tumbleweeds. It’s hardly the lush valleys of what will become known as Silicon Valley—indeed, one of the most confusing and interesting things about “Halt and Catch Fire” is that it’s not set in San Francisco (yet) but instead takes place in the Silicon Prairie, that collection of telecom corporations taking up space in the vast reaches around the most boring city in the world, Dallas-Fort Worth. This is the era before tech was cool, or to be exact, before this industry desperately branded itself as cool. And trying to make money off of bulky, beige cubes of plastic, wiring and blank glass screens seems about as impossible and alchemical as turning lead into gold. In season one, “Halt and Catch Fire” attempted to build a narrative around Joe MacMillan (Lee Pace), former IBM company man who is now trying to build a company that can compete with the computing giant. Pace is the show’s biggest star, and his story, on paper, had the satisfying beats of a Man Trying To Do A Thing that has characterized many other successful dramas, including AMC’s own “Mad Men” and “Breaking Bad.”

But Joe’s journey to make computing history didn’t quite click with viewers and critics alike. And at least part of, I think, is that it was hard for audiences to invest in a guy who desires to resemble nothing less than Larry Page or Jeff Bezos; this is the journey of a guy who wants to be everyone’s boss. He might be motivated by some purer internal ideology, but it’s kind of hard to get behind that—especially when the audience interested in watching “Halt and Catch Fire” would know already that Joe’s quest to build a competing PC is going to be stymied by Steve Jobs and Bill Gates. It’s a story of a member of the establishment struggling to be more established.

And Joe, as a character, embodies much of the more boring parts of tech, the parts that even today the tech community struggles with: corporatism, greed, stagnant innovation in bureaucratic institutions, the need to establish legitimacy warring with the need to play by a different set of rules. But, somewhat regrettably, the show demonstrated that struggle by pitting Joe against Cameron Howe (Mackenzie Davis), a bleached-blonde stripling who is maybe best described as the Kim Gordon of code. She’s got a boy’s name and a boy’s aesthetic; she’s so cool and punk that she’s kind of implausible, like Angelina Jolie’s character from “Hackers.” And indeed, until the last few episodes of season one, Cameron was less her own character and more a representation of something for Joe—something he was both consumed by desire for and could also never quite give the respect it deserved. Don Draper on “Mad Men” did that to peripheral women dozens of times. But what “Mad Men” never did was follow one of Don’s sibyls as she decided to create her own company with another woman. “Halt and Catch Fire” has done that—giving, in effect, the manic punk dream girl her own voice, her own project and her own destiny.

The result has been a desperately needed rev to the show’s story engine. Cameron is now calling the shots at her own start-up, Mutiny, along with former Texas Instruments coder Donna Clark (Kerry Bishé). Joe and the show’s other lead—Donna’s husband, Gordon (Scoot McNairy)—are, in the first episode of the second season, happily mired in domestic bliss. (Joe’s engaged, and Gordon is playing video games in the basement while babysitting his daughters.) The roles have been swapped. The expectations have been swapped. And the result is that the stakes of the show finally exist, because nothing seems like a foregone conclusion anymore. (Perhaps in a nod to this sudden energy, the cold open of the season-two premiere ended with a literal spark in Mutiny’s living room, as the force of their efforts blew the power grid for the whole block. Halt and catch fire, indeed.) It’s in real doubt, whether or not Cameron and Donna are going to succeed; it’s similarly in real doubt if Gordon and Joe are going to figure out a way to be happy on the home front, while the siren call of more money looms in the background. Cameron and Joe’s combustible attraction requires them to be placed far, far apart from each other; Gordon and Donna are meanwhile struggling through a model of marriage that occasionally works for them and occasionally falls to pieces. And as business partners and friends, Cameron’s relationship with Donna has become one of the most crucial of the show, a microcosm of female friendship, the flimsy bonds of sisterhood, the difficulties of working with anyone closely, and the trouble with making different choices than the other women in your life. (In one of the season’s most affecting conversations, both Donna and Cameron admit that neither one of them wants to be the boss, but someone has to be.)

The show is not about one man anymore. It’s about an evolving community around nascent technology; it’s about how computing became an integral part of human existence. The characters are all struggling with their own issues, and struggling to make them known to each other, both through the inarticulate language of code and the nearly as inarticulate language of human interaction.

Which is why, perhaps, the technology this season has begun to focus on is not building a PC but discovering the rich rewards and high risks of online communities—the heady rush of anonymity, the freedom of expression available through chat, the continued efforts to connect to people, even through hulking machines connected to phone lines. One where, in just a decade, fans of all genders would be able to find each other, and talk about the shows that they like, and ask what it would be like if we did it just like this, but with all the genders swapped.