"It's not about Nirvana": The real story of the music uprising which upended corporate rock and killed hair metal 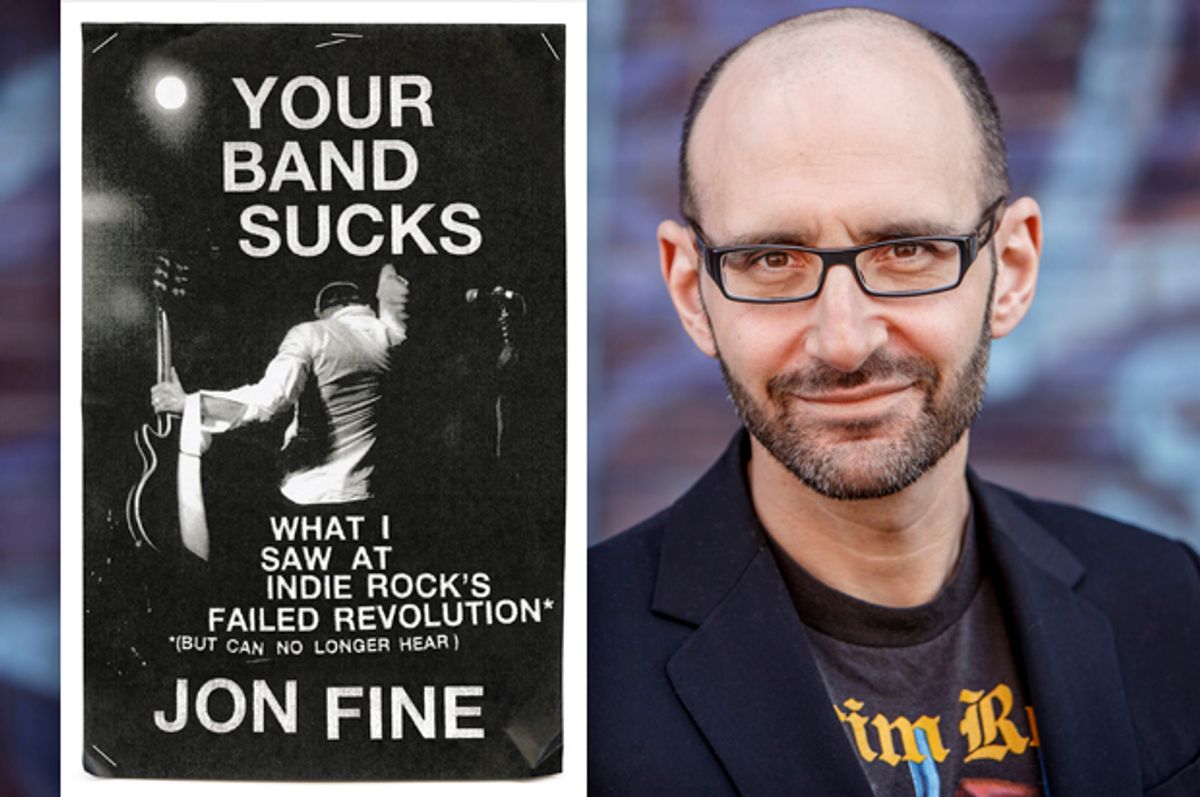 The story of the indie rock era has rarely been told as well as it has in “Your Band Sucks,” the new chronicle by Bitch Magnet guitarist Jon Fine. Subtitled “What I Saw at Indie Rock’s Failed Revolution,” the book tells how a handful of outcasts came together to form an indie subculture all over America, spending time on rainy campuses (the group began at Oberlin), in quirky record stores, beer-stained clubs and foul-smelling vans. Fine offers both a close-up of being in a band on the road – there is a slow-motion car crash scene nearly as lyrical as something by Denis Johnson – as well as a big picture look at the ‘80s and the tribe that clustered around post-hardcore and alternative rock.

Written with both anthropological detachment and deep romanticism about the making of music, Fine’s book belongs on the shelf alongside Michael Azerrad’s "Our Band Could Be Your Life.”

We spoke to Fine in New York, where he is executive editor of Inc. Magazine.

There have been a number of books about indie over the last few years. What part of the story did you think hadn’t been told?

One thing I was interested in – and continue to be interested in – is the culture. But it’s not about Nirvana, Fugazi, Mudhoney – it’s about, what’s it like for a band on the road, every night, getting paid $200, $250 a night, that’s pretty out there. I don’t think we’d consider Fugazi mainstream, but they sold a lot of records. I wanted to tell the stories of the bands that were a level below that, like on a good night they pack the equivalent of the old 930 Club, or maybe not even that.

So the interesting thing for me is the culture, that moment in time. Clearly, I have a lot of complicated feelings about it. But I don’t have any question that this was incredibly significant, culturally: It basically killed off hair metal, so I’ll love it forever for that. And I tried to be provocative with the title, but in 1980 there was basically nothing, and by the end of the decade there was something. And there’s something still. And that’s not nothing, man. It takes a lot to build a circuit.

What was the indie rock tribe, which you joined when you were in college in the mid-'80s? What did these people have in common – the bands, the audiences, the record-store clerks, the 'zine writers, the college-radio folk… What brought them together?

Pretty much it was smart misfits. Generally, the smart misfit outcasts in all their hometowns… Disaffected, and, I don’t mean this in any grand way, but carrying some kind of trauma -- a chip on their shoulders or a sense of being wounded. You could see both playing out in various ways in this music. I don’t mean to get too meta on you, but Michael Azzerad quotes Bob Mould saying, “I was at Macalester College, talking to guys who were wearing suits and ties to class every day and telling me how great Reagan was, and I thought, ‘This is fucked.’”

It was varying strains of this stuff going around, and there weren’t a lot of outlets. I graduated college in 1989 – the post-Reagan economic doldrums. The idea that you could make a lot of money in a vaguely cool way was nonexistent. There just weren’t a lot of jobs out there. I went to Oberlin, where nobody gave a single thought to a career – you got out and temped and tried to figure it out.

For me this was the arena where I grew up: Slowly, imperfectly, with a fair amount of collateral damage. This is my hometown, and the hometown of a lot of other people.

By the time Bitch Magnet came along – in 1986 – we’d seen a few years of alt-rock, college-radio infrastructure building, and the development of a club circuit. But “Nevermind” hadn’t happened yet; indie rock hadn't broken through. What was that period like?

My generation of bands was really fortunate – we were coming into it just after the really difficult battles had been fought. Bands like Black Flag, Dead Kennedys and the Ramones had carved out the circuit and they toured, along with bands like Mission of Burma, at a time when people would get violently upset at weird music. They didn’t know how to react.

With Black Flag doing 200 shows a year, Sonic Youth and the early SST bands on the East Coast… This is the first generation where the hardcore circuit has been established, and a sense that it’s not just hardcore bands who are gonna do it: There’s all this other stuff.

Eighty-four, ’85, '86 – just off the top of my head, all these records came out: "Zen Arcade" by Hüsker Dü, "Slip It In" by Black Flag, "EVOL" and "Bad Moon Rising" by Sonic Youth… it was a really good time. There was a bit of energy that was starting to gather, and to disperse. And there was a circuit. And it opens up gradually. I can’t remember who said it, but every time Black Flag toured, there were more places to play.

So ‘85 to ‘90 to me is the really great flowering. I had the fortune working at a radio station at the time, so a lot of it flowed in: "Here’s a package from Touch & Go – maybe it’s the new Laughing Hyenas record, a great band from Detroit." But more than that, you’d get these 7-inches from these weird bands from anywhere – Sister Ray from Youngstown, Ohio... The connections were all getting started – you had a sense that this was happening not just in New York and L.A. or Seattle – it was happening in places like Richmond, Louisville, Texas…

What’s the chemistry like in an indie rock band? Did your various bands have anything in common?

A lot of musicians get into it because they have something they can’t put into words. I’m much more into the music encapsulating the feeling – I don’t give a shit about the words.

You describe “indie rock’s failed revolution” – what do you mean by that?

A lot of people are calling me on that, and I totally get it.

I was so up in it to think that this indie rock thing would topple the big music industry – that’s quite obviously preposterous. That a guy running CBS records in 1989 is going to hear a Drunks With Guns 7-inch and burst into tears and say, “Everything I’ve done all my life is false, I quit, I’m breaking up the company…”

So as far as breaking up the established order, it failed. But to me, the fact that a circuit was carved out and still exists is huge. When I was a 15-year-old weirdo in my town in New Jersey, I didn’t know that shit existed. Now that 15-year-old weirdo in rural Nebraska, outside Winnipeg, anywhere in the world – they know this exists. That’s huge – that’s really huge.

I was referring to the belief that we were going to take over. But it’s hard to put on a bona fide revolution in America. There’s a lot of goodies the status quo can throw at you, so the revolution isn’t necessary. And most people don’t care that much about music, or they care about what they listened to 25 years ago… At the time, I thought that thing I was so enthralled by was going to affect everybody – but it doesn’t happen that way.

It’s really hard to put into actual human words how deeply and crazily I love this stuff. It kept me breathing. It was the air in my lungs. I do not use any of these terms lightly. It was such a relief to find these people, because I didn’t know that it existed.

And the music was so ridiculously good – and no one seemed to know about it.