"Game of Thrones" recap: There is no commodity in Westeros more valuable and more worthless than a girl

Stannis turns a corner he can't come back from, while Jon and Dany confront the fall-out from their compromises 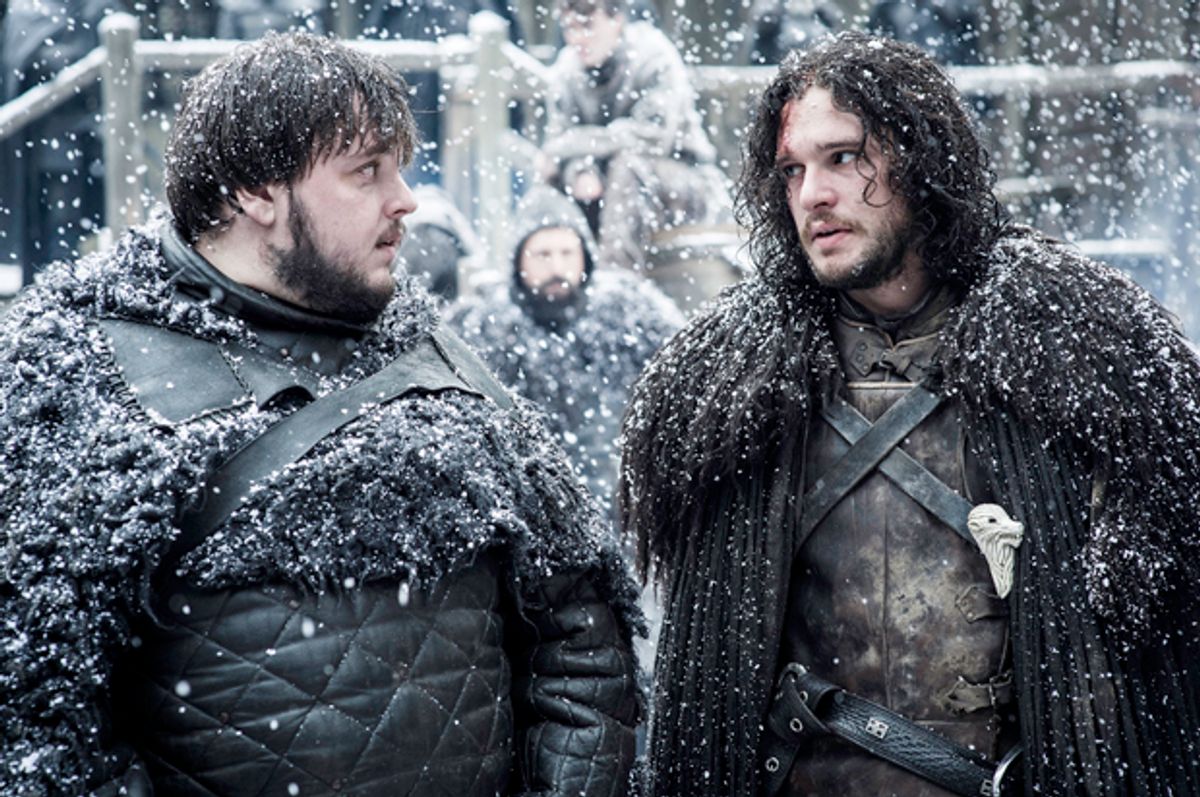 In the wake of someone’s death, it’s common to console the bereft with the idea that those who’ve passed on exist now “in a better place.” It’s a strange consolation in the best of times, given there’s no guarantee of any sort of existence beyond the one we currently inhabit and, even if there is, it’s cold comfort to think someone we care about would be better off somewhere else.

Yet on "Game of Thrones," when an innocent is taken out of its brutal, hateful, world, you can’t help but feel a sense of relief that their suffering has come to an end and that they’ll no longer serve as merely a pawn in someone else’s chess game.

It would be easy to be angry about the sacrificial murder of Shireen Baratheon, who has been nothing but a paragon for all things good and loyal and sweet throughout the run of "Game of Thrones." It would make sense to rage against the unfairness of a mere child being left to a fate seen as too inhumane for Mance Rayder in the season five premiere. It only makes sense to cry for Shireen Baratheon and her ritualistic slaughter, born into this cruel world to an indifferent mother and delusional father, rarely seen as anything more as an unsightly burden. In "Game of Thrones," Shireen Baratheon wasn’t a person, she was a commodity. An albatross around her parents neck, she was locked away for as long as possible and eventually only trotted out when it was time to extract the only value she ever had, residing wholly within the blood that ran through her veins.

It makes sense to weep for Shireen Baratheon but to do so would be an exercise in futility. Because Shireen Baratheon was a girl and there is nothing in Westeros or beyond that holds as much value while simultaneously being so completely worthless.

“Dance of Dragons” is a decidedly pointed episode as far as these things go, featuring not only Shireen’s trial by fire, but the haggling over the orifices of a pre-pubescent girl in a brothel. Arya is meant to be murdering an old man and Myrcella is being shuttled about the greater known world with her betrothal (and, one assumes, her hymen) intact and Dany is escaping the smoldering ruins of the Meereen fighting pits on the back of a dragon. Though we don’t see them, we assume that Cersei and Margaery still languish in dank cells in King’s Landing and that Sansa is still wasting away in her rape tower and you want to cry for Shireen Baratheon because she is dead but maybe instead you should cheer for Shireen Baratheon because she is free.

The world of "Game of Thrones," where rape exists because it exists in the real world, treats women in a peculiar way that gets tiresome to discuss but not less important as the conversation recurs. Women on the show are raped and tortured and hunted and killed, they are stabbed in their wombs and they are violated as girls and they are traded as chattel and sacrificed by their parents and trained as assassins (because it’s the only way they can survive) and it happens because horrible things happen in the real world, too. But what is realism when the climax of an episode featuring both the human sacrifice of a young girl and the implied sexual violation of another is the show’s heroine being magically rescued by her dragon and flown far, far away?

At some point, what "Game of Thrones" has to realize is that there’s no need to continually remind audiences that the world at large is a dangerous and cruel place for women. The reason it’s unnecessary is because we exist in that world already and the genre the show exists in is called “fantasy” not “reality.” If I wanted to see the continual abuse and devaluation of women within modern patriarchal contexts, I would watch TLC.

As amazing as last week’s episode was, it acts now as a testament to how unevenly the series is when it chooses to break away from the books it’s adapting. While “Hardhome” was full of narrative choices that made the series seem like it was well on its way to becoming its own story, “Dance of Dragons” makes narrative choices that, similar to the choices made with Sansa’s storyline, end up needlessly torturing characters when no torture is necessary.

"Game of Thrones" is obsessed with reminding its audience that a woman’s work is never done, that her body is never her own, that her life is never safe, and each time the audience pushes back against the idea that such depictions are a foregone conclusion, they are informed that it is the way of the world they themselves live in and painting the world any other way would be disingenuous. Don’t shed tears for Shireen Baratheon. Shireen has finally slipped free of the chains that bound her to a world always doomed to betray her. Save your tears instead for all the women left in Westeros who have only the worst to come. Or, better yet, save your tears for yourself, because the men running "Game of Thrones" don’t think you’re looking into a TV screen; they think you’re looking into a mirror.

Ramsay’s resume continues to grow, as now he’s not only good at torture, he’s also good at setting horses on fire.

Jon returns the the Wall with the Free Folk. So that was a thing that happened.

Davos, one of the few good-hearted people left on the show was sent away, surely because he never would have stood for Shireen’s murder. One can only assume he will only return to be summarily killed because, if you haven’t figured it out by this point, nothing gold can stay.

Dorne still exists. This was also a thing that happened.

In fairness, Alexander Siddig was given several snarky, cutting lines this episode which was nice though Academy Award nominee Keisha Castle-Hughes was, again, silent for nearly the entire episode.

Meryn Trant is in Braavos and Arya fails to kill the gambler when getting distracted by his presence. We also learn, because apparently he wasn’t abhorrent enough, that Trant has a thing for inappropriately young prostitutes. Swell.

This week’s “Too Little, Too Late” award goes to: Selyse Baratheon. Thanks for playing, Selyse. Better luck with those maternal instincts next time around!

This week’s “I Knew I Was Right to Hate Him” award goes to: Stannis Baratheon. Thanks for nothing, Stannis, you grammar-loving piece of shit.

The (stupid) Meereen fighting pits have finally opened, meaning there’s plenty of time for Daario and Dany’s fiancé to get into a pointless dick-swinging contest before the Sons of the Harpy descend and everything descends into complete madness. Since restraining orders apparently don’t exist in this universe, Jorah helps rescue Dany yet again and things are looking dire for Tyrion, Dany, Daario, Missandei, and Jorah (RIP Dany’s fiancé I can’t be bothered to look up the name of) until Dany bewitches Drogon into apparating and holding an impromptu SotH BBQ. However, her favorite dragon (yet another maternal failure; mothers should never play favorites) is quickly running the risk of becoming a shish kabob so Dany hops on board and the two fly away in an epic demonstration of leadership, leaving the rest of the Khaleesi posse SOL.